No prejudice here, only pride for the Torrey Theatre production. 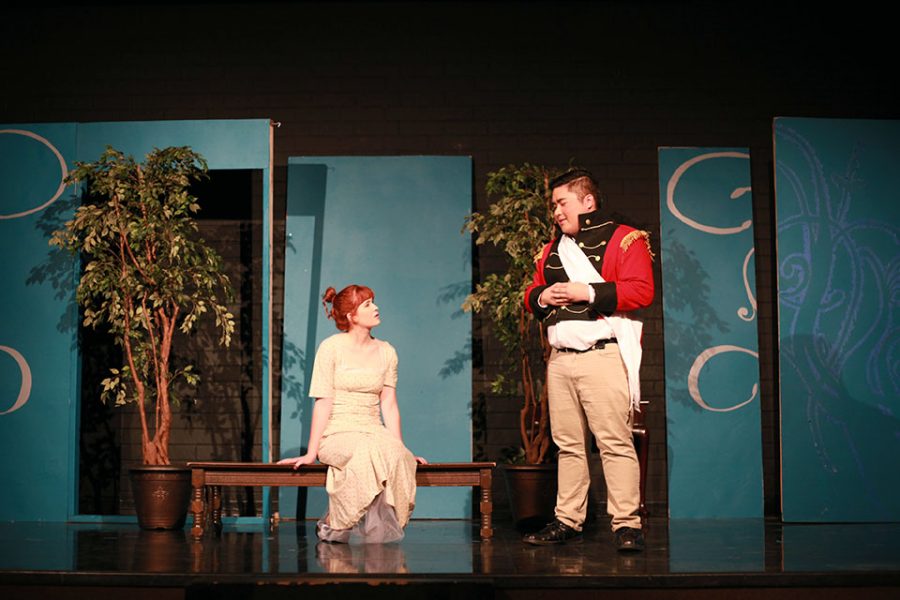 Torrey Theatre will present their rendition of Jane Austen’s Pride and Prejudice on May 11.

Pride and Prejudice remains one of the most well-known Jane Austen novels. Torrey Theatre decided to tackle the feat of performing this play. The play is about 3 hours long with period-appropriate dancing. Torrey Honors students directed and produced the performance as well as made the set design and costumes. The actors share their triumphs and struggles on stage, and how they balance the long rehearsals with reading. However, when the lights go up, these stars will be ready.

The leads of the play include freshman cinema media arts major Lindsay Lewis and senior political science major Brian Funke. Lewis plays the role of Elizabeth Bennet, the protagonist of the play, while Funke portrays Mr. Fitzwilliam Darcy, Elizabeth’s love interest. Both actors gave some insight into their roles and their difficulty portraying them.

“I feel like Elizabeth and I are very similar, which was really fun especially compared to last semester,” Lewis said. “I was playing a character that was very different than myself, but it was fun to take on the role of Elizabeth, because I felt she was more in my sweet spot.”

This is Funke’s first major production, and he also appreciates Mr. Darcy’s accent because it borderlines an English tone.

“I play Mr. Darcy in this,” Funke said. “He is basically his pride — the pride of the prejudice in Pride and Prejudice. My favorite part about him is the voice — it verges on English.”

Lewis also played the lead in the Torrey Theatre production of A Doll’s House last semester. She remains astonished that she was asked to play the lead again.

“I really wasn’t expecting to be the lead again,” Lewis said. “I was super honored when they asked me. I was a little bit scared because I knew how much work went into last semester’s production.”

Torrey Theatre puts in many hours of work. These honors scholars who have now also become actors have worked on this production since February, and rehearsals generally lasted for three hours, three days a week. The play also incorporates period-appropriate dancing, a feat which remains difficult on the small stage in Mayers auditorium with such a large cast. Some of the actors also struggled with learning to dance.

Many actors commented on the struggles of dancing. The clothing also remains period-appropriate, so work went into making those costumes as well. Senior communication studies major Lauren Miller, who stars as Jane Bennet, and sophomore math major Elizabeth Vrinten, who stars as Caroline Bingley and also designs costumes, shared the challenges of putting on this production.

“The stage is small, but we have learned to work with it, because we’ve had enough rehearsals here on stage,” Miller said. “The dancing was a little bit hard at first, but we’re making it work.”

Vrinten speaks on the independence of the student-run club.

“It’s just been a really great opportunity to bond with a bunch of people of just many different years.” Vrinten said. “This is an entirely student-run show, so it’s been produced, directed, costumes have been done entirely by students. I think that’s something very unique about Torrey Theatre is that we get no professional help.”

Vriten also has some comments about the struggles of costume design.

“Regency costumes are very hard to find, so we had to get very creative with how we wound up doing costumes,” Vrinten said. “It was a lot of thrift store. It was a lot of modifying dresses that we would find.”

While the stars of the show work hard, they also love to have to fun. Sophomore English major Brendon Sylvester, who stars as Mr. Charles Bingley, shared a little about the cast, who describe themselves as hilarious on set. Many report dabbing on set after they make a mistake.

“The cast overall is just a lovely, rambunctious group of people who are very fun to work with,” Sylvester said.

Lauren Miller feels excited for the role as Jane Bennet because she feels connected to the character. She exclaims she did not have any difficulty portraying the character because she believes they are very similar.

“I was basically typecast,” Lauren said. “Pride and Prejudice is, by far, my favorite story. I know it back and forth, and Jane Bennet is kind of my spirit animal.”

Sophomore kinesiology major Lani Miller, who stars as Kitty Bennet, shared that the actors who play the Bennet sisters have a group chat.

“We have a Bennet group chat, and we call ourselves the Beignets,” Lani said. “The French version of the Bennet sisters, the beignets.”

All of the actors remain excited for the audience to see the play. Many talked of the dancing as the most impressive skill the actors had to learn. Funke shared that a certain song sung by Mary, portrayed by freshman Christian ministries major Sara Parsons, remains the best part of the play.

“My favorite person to see on stage is Mary, because I think she just like encapsulates the character of Mary so well,” Funke said. “When she sings the song, you’ll know.”

Though managing Torrey reading with acting remains difficult, the cast and crew believe they have done a phenomenal job of putting on the production. The cast is both excited and anxious for the audience to view their production. The production features a moving set when the characters change location. Also, a character dressed as a stereotypical Torrey student will read Pride and Prejudice for an assignment in the role as the narrator.

The production will run from May 11 to May 14 in Mayers auditorium.