“Guardians of the Galaxy Vol. 2” takes top box office spot with hilarity and an engaging story. 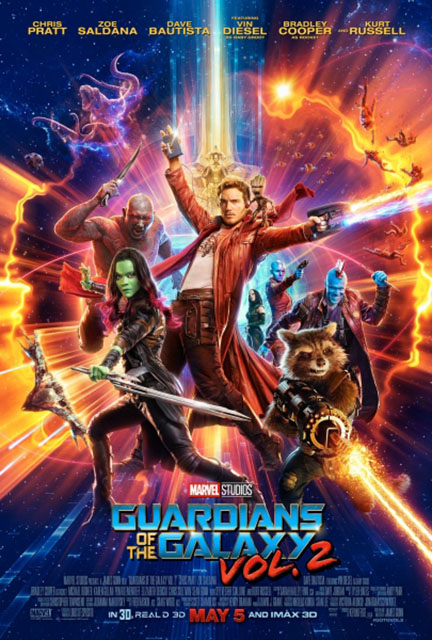 The much-anticipated “Guardians of the Galaxy Vol. 2” landed in theaters on May 5, replacing “The Fate of the Furious” at the top of the box office and generating the second biggest opening of the year. The sequel to the 2014 hit generated an estimated $145 million domestically, which will only continue to grow. Director-writer James Gunn returned to helm the project, taking on one of the most difficult tasks in cinema: making a sequel that can compete with the original. Although Guardians of the Galaxy Vol. 2 does not quite live up to the original, it comes pretty close.

Engaging plotline
At the beginning of the film, the Guardians are still working together and learning how to live with each other. Gamora, played by Zoe Saldana, Rocket Raccoon, played by Bradley Cooper, Drax the Destroyer, played by Dave Bautista, Baby Groot, played by Vin Diesel and Peter Quill, played by Chris Pratt — otherwise know as Star-Lord — travel the galaxy and work as heroes for hire. The team starts by doing a job for a race of arrogant and proud aliens known as the Sovereigns, who consider themselves superior to every other being in the galaxy. Things take a turn for the worse when Rocket decides to steal from them and the Sovereigns seek to kill the Guardians as a result. The Sovereigns almost destroy the team and cause them to crash land on a distant planet until they are saved by Ego, played by Kurt Russell, who is later revealed to be Quill’s father.

The plot is one that keeps the audience engaged and wanting to know more. Kurt Russell puts a lot of goodwill into his performance as Ego. He portrays a mysterious and suspicious character that keeps the audience guessing about his motives for finding Quill. The film continues to delve more into Quill’s backstory and investigates exactly what it is that makes him more than just a human.

Although the main plot revolves around Quill’s origin, Gunn does the rest of the team justice by developing their characters. That is perhaps where this film excels, and possibly even outdoes the first film. Almost every significant character has a story arc that makes them more complex, appealing and engaging. This is most evident with Rocket, Yondu and Nebula. Yondu and Nebula were villains in the previous film, but they end up joining the team in order to help each other. Gunn does a great job at developing the defining traits of these characters and revealing what it is they really want.

Funny but not too funny
Yondu and Rocket both share some pretty emotional moments that develop their characters and teach us more about them. The film has perhaps the largest amount of character development ever seen in a Marvel film. The characters are still learning how to live with one another and set aside their selfish tendencies for each other’s sake. It is full of moments when their relationships develop and by the end of the film, they feel like a family.

Just like the original, this film has plenty of levity. Vol. 2 has a plethora of great jokes, but it fails to reach the comedic heights of the original. The first film’s irreverent and insouciant sense of humor became a key factor in its popularity. It did not take itself too seriously, which made it different from anything else that Marvel was producing. Although Vol. 2 is full of laugh-out-loud moments, some jokes fall a bit flat. On top of that, many of this film’s greatest jokes were given away in the trailers. Gunn adds humor in order to lighten an intense and weighty situation. The strategy remains effective as long as the correct balance is found — something this film occasionally lacked. This resulted in some slightly awkward moments that left the audience wondering whether or not they should laugh.

Overall, “Guardians of the Galaxy Vol. 2” earns its place as a worthy sequel. It has all of the same traits that made the first film great, such as great humor, a talented cast, a compelling story and a groovy soundtrack. The film reveals more about the franchise’s exciting and beautiful universe, and it will surely leave fans anticipating future installments.