The Do Something club hosts event to raise awareness about the Syrian refugee and war crisis. 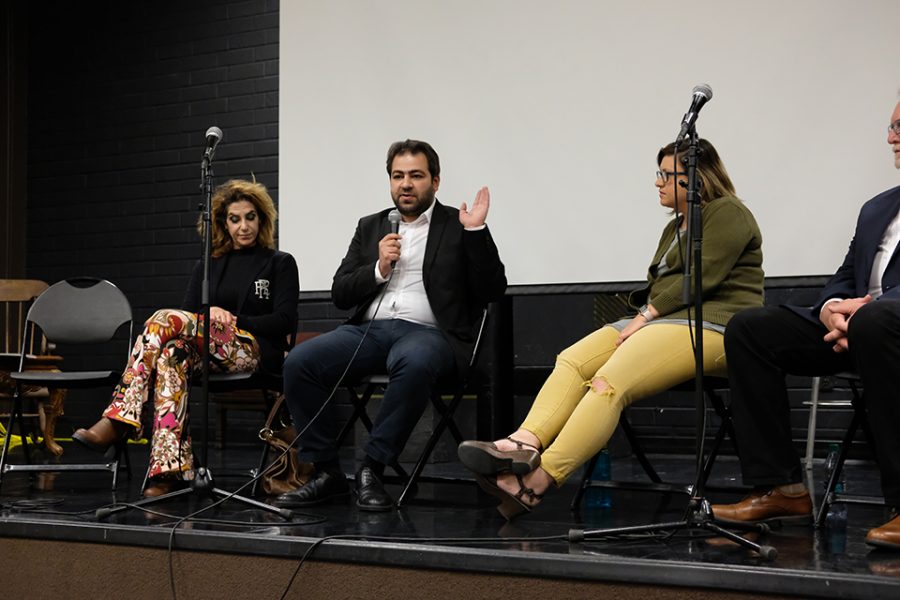 In hopes of students having empathy for the Syrian refugee and war crisis, the Do Something club showed the documentary “The White Helmets” followed by a panel on April 27.

The event began with the showing of “White Helmets,” which includes video of sites bombed in Syria and how the White Helmets group works daily to save lives of those trapped, injured or killed in those situations. The documentary focused on the White Helmets men and their experiences, such as rescue trainings and why they do this work.

“Whenever I’m on a rescue, I try as hard as possible to save every person under the rubble, whether they are young or old. I consider them all to be my family,” said Mohammed Farah, member of the White Helmets, in the documentary.

After the documentary, the panel consisting of office director of World Relief Garden Grove Glen Peterson, founder and director of The Beautiful Resistance Monica Brasov-Curca, campus coordinator for Books Not Bombs Chris Records and Syrian activists Aram Aldoumany and Lina Saleh answered questions from students as well as moderator and professor of sociology Brad Christerson.
Raising awareness
The panelists discussed how people need to understand the facts, but also look beyond the numbers and see the humanity in the situation. Vice president of Do Something club and senior nursing major Kayla Marcinkevicz believes knowing the stories helps dispel the stereotypes against refugees, Syrians and Muslims.

“I appreciated that where they were talking about how it can just be facts until you really encounter someone and you’ve heard their story. And so I think it’s really important to make more of a narrative out of it,” Marcinkevicz said. “There’s a lot of fear with Muslims and so I think part of even the Syrian refugee crisis, and refugees as a whole right now, is about raising awareness about Muslims who are just trying to… live their everyday life and it’s just they can get caught up in all these stereotypes, and so kind of breaking down those walls as well.”

The panelists also shared ways for students to engage with the issue, including becoming cross-cultural, helping with an organization and learning about the topic. Sophomore anthropology major Kylee Agron enjoyed learning from the panelists with different perspectives and realizing how the Syrian war and refugee crisis affects so many people.

“One thing I did learn, I think, was just how big educating yourself on this topic is and that doesn’t stop at reading one article or hearing one story,” Agron said. “That it’s not just these random people that are affected or these random families that you see in pictures, that it’s people here, it’s people sitting next to you.”