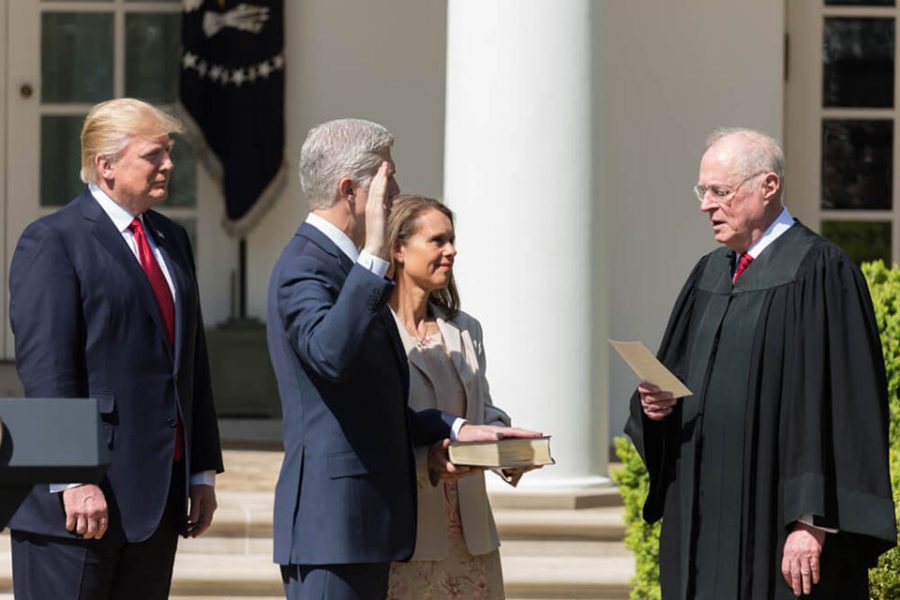 The appointment of Neil Gorsuch is President Donald Trump’s choice to fill the Supreme Court seat vacated by Justice Antonin Scalia. Gorsuch is now the 113th justice after a large political battle lasting over a year —  testing the constitution. The appointment was fought very hard by Democrats with several filibusters. The Republicans could not obtain the 60 votes required to advance the final vote and were forced to invoke the nuclear option. This lowers the threshold on Supreme Court nominations to a simple majority vote.

The new judge’s resume is quite impressive. Gorsuch graduated from Columbia, Harvard and Oxford while also clerking for two Supreme Court justices. Gorsuch also attended Harvard Law with former President Barack Obama. Gorsuch has been on the 10th circuit court of appeals in Colorado since 2006. He is a conservative who will help reinforce the conservative viewpoint on the Supreme Court. At the same time, he is not afraid to challenge constitutional principles and reshape them from the ground up. Although Gorsuch leans to the right, the justice is not afraid to side with a liberal point of view when he thinks it aligns with the Constitution. The newly-elected justice has voted moderately on cases concerning immigration and employment discrimination. Gorsuch will become the fifth Republican appointee on the court. He will fill the court’s ninth seat, eliminating the possibility of a four-four deadlock that has loomed over the bench since Scalia’s death last year.

There is a great deal of encouragement for Christians with the new supreme court justice. One of his biggest rulings was last September when he joined a dissent arguing that requirements for contraception coverage in Obamacare ran roughshod over the rights of religious non-profits. Judge Gorsuch is seen as a reliable conservative who will follow the original understanding of those who drafted and ratified the constitution.

Judge Gorsuch will be the youngest member of the supreme court at 49 and brings new blood into conservative ideology. He also subscribes to the legal philosophy of “Originalism,” popularized by late Justice Antonin Scalia — Scalia’s replacement — which holds that the constitution should be interpreted based on the framers’ beliefs at the time it was written.

On abortion, Gorsuch has arguably left an even bigger crumb-trail thanks to his 2006 book, “The Future of Assisted Suicide and Euthanasia.” In the book, Gorsuch repeatedly asserts his belief in the “inviolability” of human life. Both supporters and critics will be watching Judge Gorsuch closely with the large issues which will be presented to him.