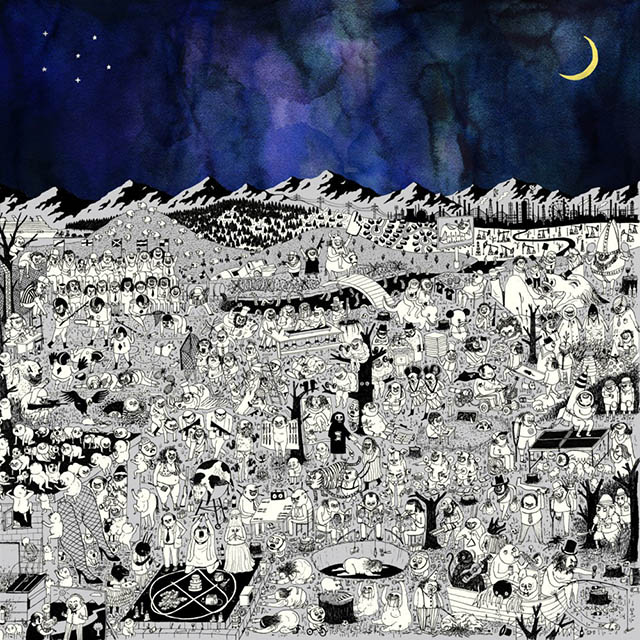 Josh Tillman — also known as Father John Misty — returns more transcendent, intimate yet impervious than ever before with “Pure Comedy.”

Discerning the enigmatic persona of Josh Tillman has had its share of difficulties, and the sprawling zaniness of his first two albums have not made it any easier. But with the help of some bare-bone, confessional lyrics on his latest release “Pure Comedy,” audiences are treated with the slight materialization of who Tillman is. Despite a more lyrically brazen approach, Tillman still maintains his tongue-in-cheek attitude — flashing the same bravado, wit and intelligence that sets him apart from his contemporaries.

While the palatable somberness of “Pure Comedy” may dampen Tillman’s meteoric rise curated by the glorious obscurity of “I Love You, Honeybear,” his latest release strengthens his bond with his listeners and reconciles the futility of humanity simultaneously. Tillman accomplishes this while operating on a sonically modest collection of traditional, hook-less folk arrangements anchored by solemn tempos which elicit a rather banal listening experience for the listener. However, “Pure Comedy’s” piano-ballad elegance generates a ‘70s soft-rock aura beset by a contemporary orchestral flare, ultimately injecting enough life to keep this listen engaging.

Unlike the immediate acclaim that “I Love You, Honeybear” brought, “Pure Comedy” will stand as a polarizing addition in his discography. Nevertheless, Tillman’s latest installment of ingenious artistry and niche for social commentary will unveil itself slowly as time passes.

“Pure Comedy’s” level of musical diversity fails to live up to its predecessors, but the production and piano arrangements remain bewitching. While the lyrical subject matter seems otherworldly and multilayered, the composition juxtaposes perfectly, never once crossing into some cluttered realm of avant-garde production value.

At this point in his career, Tillman understands that his words and delivery of those words are what isolate him as a musical pioneer. Father John captivates throughout “Pure Comedy,” lending his charmingly earnest vocals, which spellbindingly loop through each track to create a surreal piece of art that keeps his undoubtedly morose, facetious and esoteric lyrics front and center. Like many great lyricists, it is hard to gauge the merit and intentionality behind Tillman, whose ambiguously satirical writing prompts a sense of apprehension in every line.

As this apprehension manifests into substance, “Pure Comedy” succeeded in making me feel like trash for being a human being as Tillman unassumingly commentates on how malaise humans can be. But by the end of listening to this album, I became content with my existence, just as Tillman comes to terms with the inevitable wretchedness of human nature, including himself.

Lyrically, this album will pose a challenge for some. Many argue that Tillman’s lyrics may come across as pretentious. Ironically, Tillman critiques those who are pretentious. The title track “Pure Comedy” and the notorious “Total Entertainment Forever” capture the human folly of ostentatious living and its tendencies to worship the hollowness of modern entertainment, yet Tillman slights himself alongside the crowd.

While the album kicks off as social commentary, it progressively transforms into self-examination. On surface, “Ballad of the Dying Man” appears to scrutinize others, but it is just as much self-deprecation as Tillman includes himself in the ridicule. This seamless intermingling of social critique and self-awareness oddly exposes the existence of humanity at the heart of this body of work. Under all of Tillman’s deadpan approach to “Pure Comedy” there lies an alluring romantic cynicism impossible to not buy into.