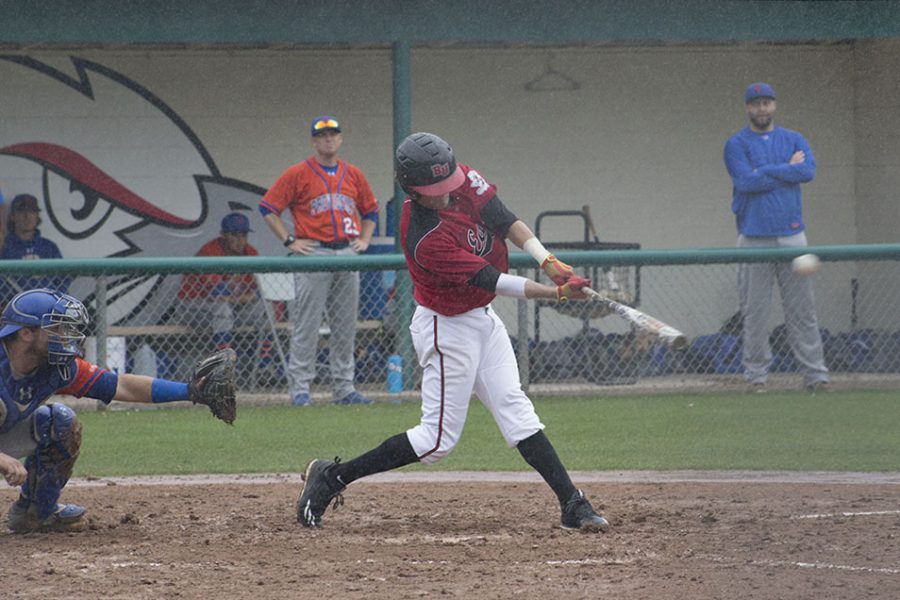 After successful execution of small ball in a 5-4 victory over the San Diego Christian College Hawks on April 7, the Eagles turned around and relied on the hot bat of sophomore third baseman Joey Magro to soundly defeat the Hawks  8-4 in game one of Saturday’s doubleheader and 6-4 in game two.

Junior righty Micah Beyer took the mound for game one of the doubleheader and pitched solidly. Beyer tossed six innings, striking out six San Diego Christian batters while allowing only two earned runs on four hits along the way.

While Beyer continued his strong junior campaign, the real story of game one proved to be Magro. The 6’0” sophomore from Redlands, Calif. wielded a hot bat Saturday afternoon as he went 4-5 from the plate. With two outs in the sixth inning and the Eagles already up 5-2 on the Hawks, Magro laced a two-run double into left field that capped off the game’s deciding inning.

Senior southpaw Buddy Brouwer manned the rubber for game two and hit a few speed bumps on his way to a solid outing. While he recorded a no-decision, Brouwer struck out four in five strong frames and allowed four runs on five hits.

Biola’s first runs of the game came via gutsy yet intelligent base-running. With two outs in the top of the second, speedy junior outfielder Phil Knapp caught the opposition and fans completely by surprise and stole the elusive home base.

After Knapp’s heads-up play, Magro continued his strong afternoon with another double to left center. Magro ended the game 2-4 and finished with six hits in the doubleheader — a phenomenal afternoon for Magro.

Magro’s hot bat proved infectious for the rest of the lineup, as the team tallied up 11 hits in the game. However, junior first baseman Colton Worthington, batting second behind Magro, flaunted the biggest bat of all. Worthington went 3-4 and drove in three runs with one swing of the bat.

After the Hawks walked junior infielder Ricky Perez and gave up a base hit to Magro to start the fifth inning, Worthington came to bat with the Eagles down 4-1 and on the first pitch launched a bomb over the center field fence to tie the game at four.

Senior right hander Wyatt Haccou came on in relief of Brouwer in the sixth inning and twirled two shutout innings, leaving ample room for the Eagles to take the lead.

In the top of the seventh inning, senior infielder Sam Thorne put the game out of reach with a two-run double, clinching the Eagles’ game two victory.

With the season winding down, the team’s brimming confidence and ability to obtain contributions up and down their roster will make them tough to beat down the stretch.

“We feel like we can continue to sweep teams for the rest of the year and win series and win GSAC,” said senior outfielder Jeremy Barth. “That is our goal right now.”

With the Eagles’ sweep of the Hawks, Biola extends their win streak to five games, improving their season record to 27-13 and their conference record to 13-8.

The Eagles will look to extend their win streak on Wednesday, April 12 in Atherton, Calif. for the first of three games against Golden State Athletic Conference rivals, the Menlo College Oaks. First pitch will be at 2 p.m.