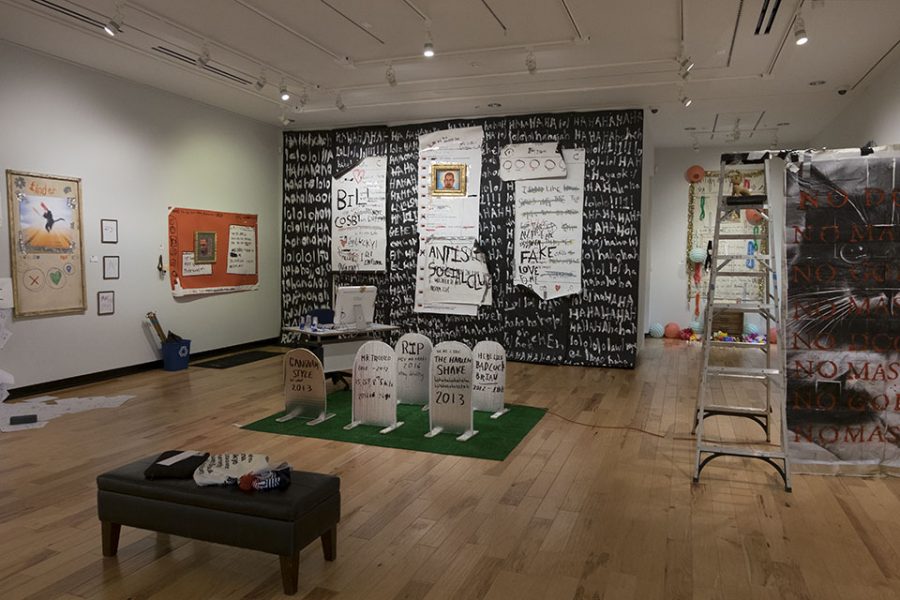 The gallery is quiet as I walk past Sharpie-scribbled gravestones. Written on them are “dead” memes: those who have over-ripened to the point where they no longer are humorous. “Who Can Say Where the Road Goes” by Enya, a song that played itself into meme history as a decibel-boosted background song, plays next to a shrine to the deceased gorilla, Harambe. Soren Iverson’s senior art thesis, “Quality Content,” is a look at the humor found in memes on the internet. Beyond this face value, the show goes one step further, amplifying the nature of the pieces to almost grotesque places as a social commentary on how the internet works.

Having brought various cultural iconographies to life-size forms evokes so many different emotions. This gallery derives temporary warmth from the excitement of seeing memes pop off the screen and onto a canvas. This sensory overload eventually wears off, setting in the cold reality of how Iverson could see what the internet has done to the way so many people perceive life through a JPEG image, and how he felt inspired to make a satirical gallery about the matter. The exhibit’s dichotomy of comedy and seriousness about the internet creates a distinct aura.

Iverson leaves behind no meme in this gallery, citing prominent fads like John Cena videos to the subtlety of using the Japanese “¯\_(ツ)_/¯” emoticon and online gaming. Unlike some other meme galleries, like “by any memes necessary” displayed in Hollywood in February, the pieces have twists in them such as putting a fresh Cat in the Hat meme inside a Tinder profile, or drawing over every meme with a type that can only be described as writing with the non-dominant hand. On top of this, Iverson utilized unconventional materials to create the art, such as a found rug or print-outs of screenshots and spray-painted bricks. The sheer absurdity of the pieces forces viewers into not only laughter, but also musings upon what they just laughed at and why they did.

The gallery has a bittersweet quality. Pieces of humor and satire shamelessly spread themselves across the wall, waiting for people to enjoy them. Any young person who has gone on Twitter or Facebook in the last year could laugh at the sight of a giant “dat boi” cutout. At the same time, the real-life manifestations of these memes stand as a chilling social commentary, showing the negative effects of the virality of the internet and its unstoppable nature, as Iverson put it in a previous interview with The Chimes.

This gallery has universal meaning. Laughter abounds in the gallery as young people point, laugh, take photos of and gaze upon the “spicy” memes. Beyond the expected reactions, viewers also educate each other on unknown memes and deeply discuss the meaning behind them. The opening, perfectly timed with admitted students day, fills during the daytime with possible Biolans explaining to their parents the meaning behind the meme.

“Quality Content” by Soren Iverson is one with the internet. Iverson does not separate the pieces from the original setting where their inspiration thrived. Through the social commentary made through the insanity of his work, the gallery transports users into the internet, a beautifully messy place of blissful and muddled “Quality Content.”