A Hope RA provides a way for students to read different books. 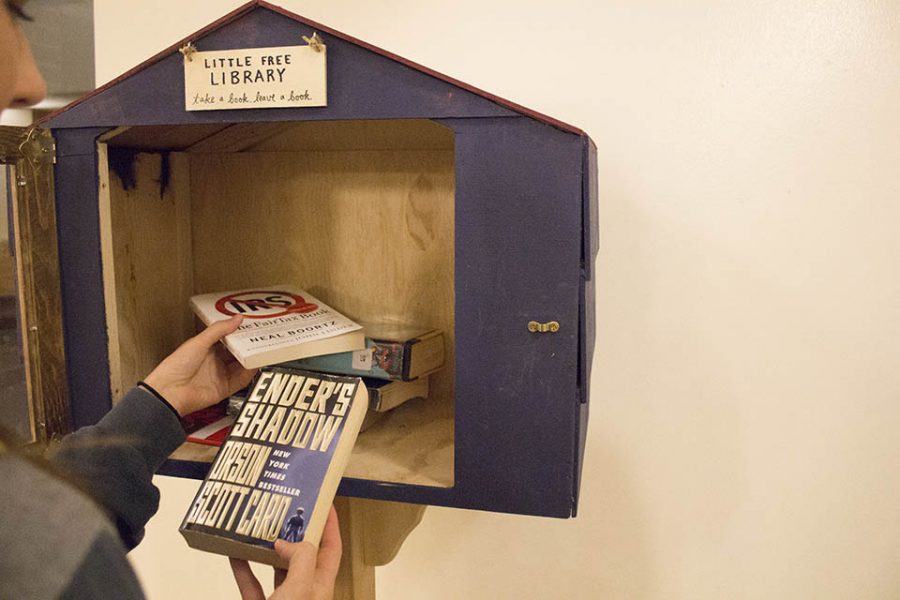 A new “Little Free Library” has begun in the lobby of Hope Hall which allows students to share their favorite books and read their peers’ favorite stories as well.

“I had the idea since the beginning of the year to kind of do this, make a book exchange so people can give and get inspirations from literature to each other,” said Luke Johnson, Hope resident advisor and sophomore political science major. “There’s something beautiful about some stranger being stoked on my favorite book and so I just did it.”

Johnson’s brother made a box that looks like a birdhouse with glass doors with an open space for students to put their books in. After contributing a book of their own, people can then take a book for themselves. Johnson copied the idea from local book exchanges in Fullerton, La Mirada and Long Beach.

“The idea is you get a book and you give a book,” Johnson said. “So you have a book and you put it in, ideally, one of your favorite books that you want other people to read, and you take a book out and then you get to read that book and then exchange that for another book and it’s just constant book exchange of inspiration and beauty.”

A lack of options

After adding a few of his own books, Johnson ordered a few books from Amazon to fill the box with about 15 books. However, so far several students have taken books without contributing their own, resulting in a lack of options, according to Johnson.

“I don’t know if they were directly stealing or misunderstanding the concept of a book exchange but now there were like four left as of last week. So I’ve kind of been putting more in there as they’ve been coming in the mail,” Johnson said. “I’m hoping that people took books with hopes of exchanging it with another book later but there’s not as many books in there as there should be right now.”

Some students have expressed similar concerns about people taking the books without contributing to the library themselves.

“I think it’s a really cool idea,” said Kiersten Ziegler, freshman cinema major. “I wish people would stop taking books and not leaving them, because then nobody else has access.”

Despite the shortage of books, a few people have also donated several books with the desire to see the exchange grow. Although the book exchange remains located in Hope, Johnson hopes more students will visit and contribute to it.

“Not everybody is super hyped on books as I am but I will walk by and somebody will have the door open looking at books and I’ll be like, ‘That’s my favorite book, read that one!’ and they’re like, ‘Dude, this is the coolest idea, thanks for doing this,’” Johnson said. “I’ll get more stoked on it because they’re getting more stoked on it and then it’s fun, it’s great.”

Some students also like the idea of having Little Free Libraries around campus, however they struggle to balance free reading with homework.

“I haven’t used it but I think it’s a cool idea,” said Kristen Hicks, junior engineering major. “I just don’t have that much time to read unfortunately. I have a lot of homework to do and stuff and papers so I just haven’t had the opportunity to just kind of sit down and read for fun.”