Men’s tennis wins three-quarters of their matches, gaining momentum heading into final stretch of the season. 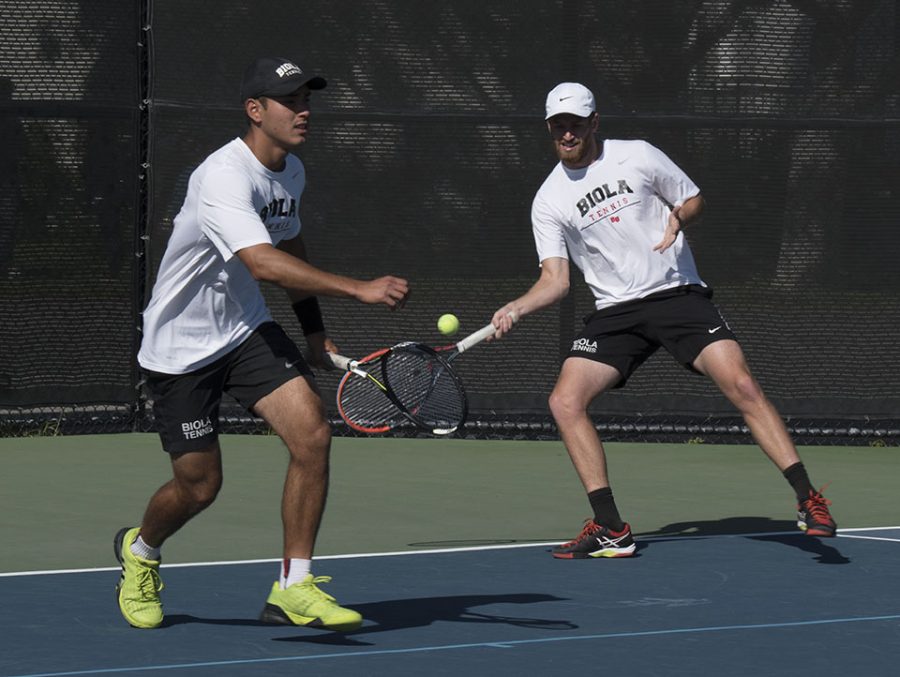 Four matches in one week is a large amount for any sports team, but the Biola men’s tennis team handled the load well, winning three of the four matches. They beat the University of the Southwest on March 23 and Saint Lawrence University on March 24, then split against Pacific Lutheran University and University of Hawaii at Hilo in back-to-back matches on March 28 and 29.

a chip on their shoulder
The week began against the University of the Southwest Mustangs, and Biola came in with a chip on their shoulder after losing a tough Golden State Athletic Conference match to San Diego Christian College on March 18. The Eagles bounced back in a big way, earning the 9-0 sweep of the Mustangs. The only close match came on the No. 3 singles court, where junior Joe Turnquist won the first set 7-5, then shutout his opponent 6-0 in the second set.

The next day, the Eagles took to the court again against the Saints of Saint Lawrence, winning in decisive fashion. They dropped just one match — the No. 6 singles court where freshman Noah Archer lost in a 6-3, 0-6, 10-5 effort. That match marked Archer’s first time playing solo as an Eagle, although he did grab a win on the doubles court with fellow freshman Jacob Vanderbeek.

The win against Pacific Lutheran earned Biola their third win in a row and second shutout of those three wins. Freshman Derek James and junior Lucas Lee had a tough win on the top doubles court, grabbing the 9-7 victory. In singles play, junior Michael Vartuli played three sets, winning 6-1, 3-6, 10-6.

Biola sustained their only loss of the week against the UHH Vulcans, dropping the match 7-2. All three doubles matches went to the Vulcans, despite James and Lee forcing their opponents to have to win 9-7. Biola won the No. 6 and 3 singles matches, where junior David Garcia and James played, respectively. Garcia won 6-4, 6-4, while James won 7-5, 6-4.
good momentum
“It felt good to get on a good winning streak,” said junior Philip Westwood. “However, our focus is on winning GSAC, therefore, we take these wins as a preparation for the bigger and more important one. Hopefully we can continue with this good momentum.”

Biola’s overall record moved to 8-9, and the Eagles have a chance to improve their 2-4 GSAC record when they travel to the Westmont College Warriors on April 1 at 11 a.m.