Students seek to find their art after its disappearance from Common Grounds in fall 2016. 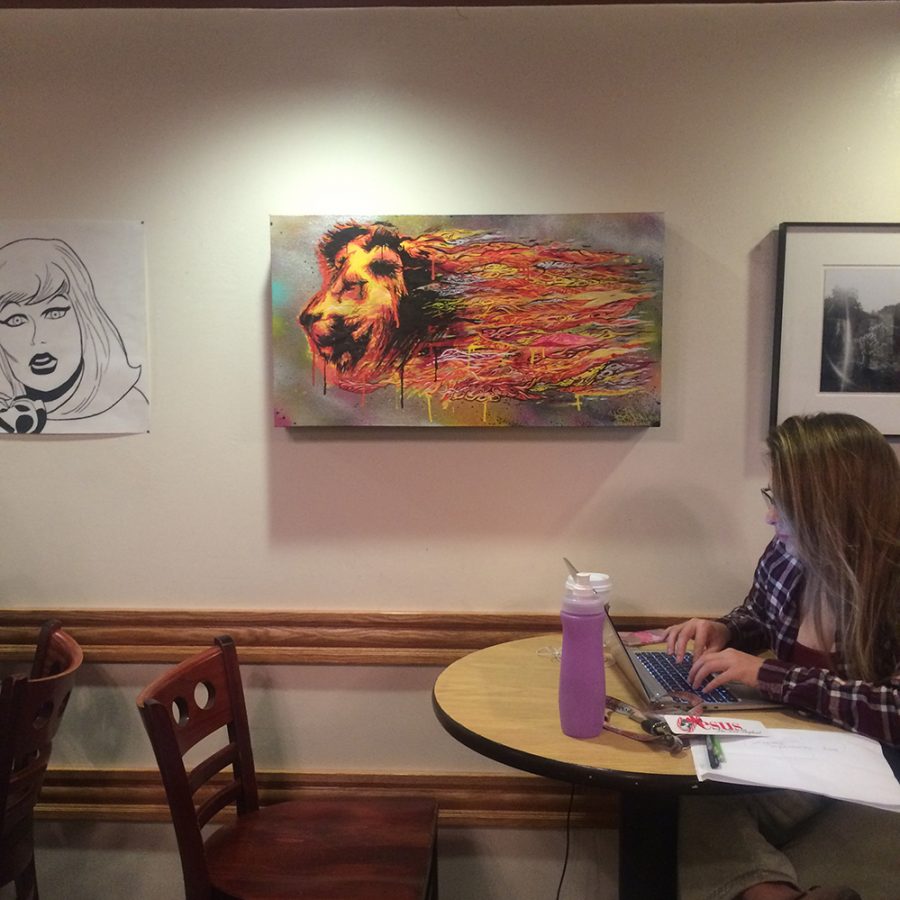 After having their art displayed in Common Grounds in spring 2016, students search for their misplaced artwork with the art department’s help.

A stolen interest
Junior studio art major Brandon Steadman discovered his painting of a lion no longer displayed in Common Grounds in fall 2016 and reached out to gallery director and public arts curator in the art department Jeff Rau. While Rau did not formally gather and deliver the art to the coffee shop, he connected art students with Common Grounds.

“I was kind of disappointed because there was someone who was interested in buying the piece and so I was kind of bummed because I asked about it to a couple of friends and one of the professors who had curated the show. They had no idea where it had gone,” Steadman said.

Rau helped a group of students in December 2015 submit art directly to Common Grounds for display in spring 2016 with no specified end date. During the semester, seven pieces were displayed on the left wall, including three tiny paintings, two larger paintings, one drawing on paper and one framed photograph.

Over the summer, facilities management came in to paint the left side wall in Common Grounds and removed the art pieces and before placing them in a box on the counter for the Common Grounds staff. Staff members report seeing the box in storage, but by the end of fall semester the box disappeared, according to Rau.

The Chimes made several attempts to contact a Common Grounds student manager for comment, but received no response.
loss of an opportunity for a whole community
“We’re trying to make sure that in the future, when we do projects like that, there is a more clear kind of point person with the facilities, whether it be Common Grounds or elsewhere that, hopefully can be the on-site person to help us identify more quickly when there might be issues,” Rau said.

Steadman continues to search for his lost art, Rau found a photograph by another artist and sophomore studio art major Shelby Montelongo on the floor near the back entrance of the Caf.

“At some point, actually very late in the fall, I actually found Shelby Montelongo’s photo, actually I guess it just sort of re-emerged. I didn’t know where it had come from, I actually didn’t have that photo at the time, I didn’t know it was actually a part of that group of missing artwork,” Rau said. “It was January that I got the images from Brandon and I said, ‘Oh my gosh, that was one of the pieces that was missing.’”

Rau hopes to recover the displaced artwork and create a higher awareness for the proper curation of student artwork throughout campus.

“When work goes missing or gets damaged from being on public view, it has an impact on our ability to continue to do these things,” Rau said. “So on one hand, it makes it harder for me to make those guarantees, and on the second hand, if I do ask students to participate, it makes it harder for them to want to participate. I feel like that ultimately is a loss of an opportunity for a whole community if we can’t continue to offer the art in public spaces on campus in the same way, especially the rotating exhibitions of student work.”