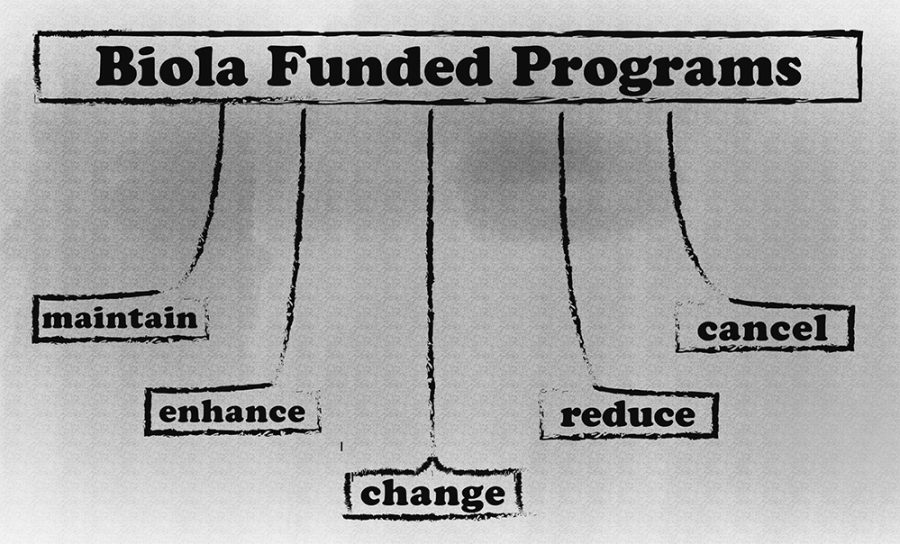 In order to reallocate $15 million to academic, administrative and support programs over the next five years, staff and faculty began evaluating over 300 programs in a prioritization process.

“The main goal is to basically take finances that we currently have and reallocate it to programs and services that have what [administration] would say is the strongest… growth potential to enhance Biola’s students and/or revenue,” said André Stephens, vice president of Student Development.

In phase one, every single program with a budget went through a review process by submitting a form, which two task forces of 14 people each then used to place the programs into five categories: maintain, phase out, substantive change, reduce or enhance.

Biola decided to make a long-term plan to steer away from significant financial problems of the future, according to director of communications Brenda Velasco. The change also came from seeing other schools go through the prioritization process, including Point Loma Nazarene University who finished the process in spring 2014. Both Point Loma and Biola have taken a proactive approach to solving the problem rather than a reactive one.

“As I’ve talked to other schools that have done this process, it was a hard process but now they’re, like, two, three years out and they are experiencing financial viability in a way that they hadn’t,” Velasco said. “I think the impact long term is that we’re going to have a much better and healthier organization and employees who are utilized in the best way with their gifts and their areas.”

In order to make the final decisions, the second phase includes gathering input from faculty and staff, who can submit forms online with their comments and concerns. Dean of Cook School of Intercultural Studies Bulus Galadima appreciates administration trying to make the process fair and objective, as well as transparent.

“What I like about the prioritization process is just the openness and the desire, strong desire, from top administration, especially the provost, to make this, and the president, actually, to make this very inclusive listening to various voices of significant stakeholders on this issue,” Galadima said.

With phase two ending on March 23, undergraduate chair of psychology Peter Hill mentioned the current concern of faculty and staff but also the decisions the PAC will make in phase three.

“So, there’s a lot of anxiety and a lot of concern right now, but I think it’s moving forward,” Hill said. “I think the tough parts are yet to come, you know, when it comes down to actually making financial decisions based upon this just because a program gets a lower score or something like that doesn’t necessarily mean that they’re going to be phased out at this point, it just means that they’re candidates to be looked at.”