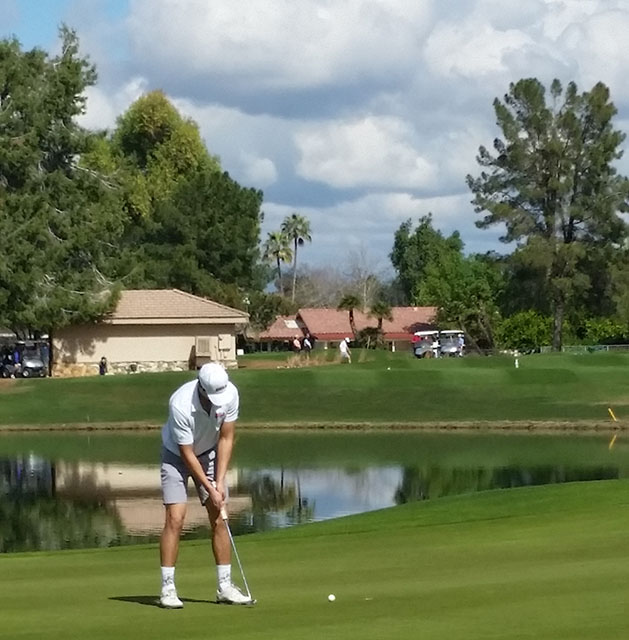 Eagle Glen Golf Course in Corona, Calif. hosted the Cal Baptist University Spring Invitational on March 20-21, where Biola’s men’s golf team tested themselves against a field of NCAA Division II talent. The Eagles finished the three rounds of play with a score of 933 to give them 15th out of 19 teams.
A rough round

“Considering the fact that the field was all NCAA Division II schools, and some of the top DII schools in the country were there, it isn’t as bad as it sounds, but we have what it takes to do better,” said sophomore Austin Bishop. “We are not far off from competing with some top competition in NCAA.”

On the first day of the invitational, windy conditions made for a rough second round, though the Eagles capitalized on the lack of wind in the first round. Junior Tristan Ginkel led Biola’s effort in day one, scoring a 76 and 75 to put him in a tie for 29th out of the 100 players.

Bishop also carded a 76 in the first round, but dropped to a 79 in the second round to put him in the second spot among Biola golfers. Sophomore Kyle McAbee came next with scores of 77 and 80, followed by junior Cameron Bauer with a 79 and 80 and freshman Kaden Page bringing up the rear with his 84 and 79 scores.

On day two, Bishop took the spotlight by dropping his score to a 70, the best round of any Biola golfer in the tournament. That round earned him the 25th spot overall on the leaderboard. McAbee registered a score of 78, the only other Eagle beside Bishop to have a score in the 70s for the round. McAbee finished in a tie for 68th.

“I think we need to work on course management — meaning accuracy at the right times — knowing when to be aggressive, when to be passive and to know where to miss in the right spots,” Bishop said. “We can always work on putting as well.”

The Eagles have over a month to work on all of those improvements, as their next tournament is the Golden State Athletic Conference Championships hosted at Carlton Oaks Country Club on April 26-27.