Biola’s men’s tennis team wins over College of Wooster before joining the women’s team in defeat against San Diego Christian. 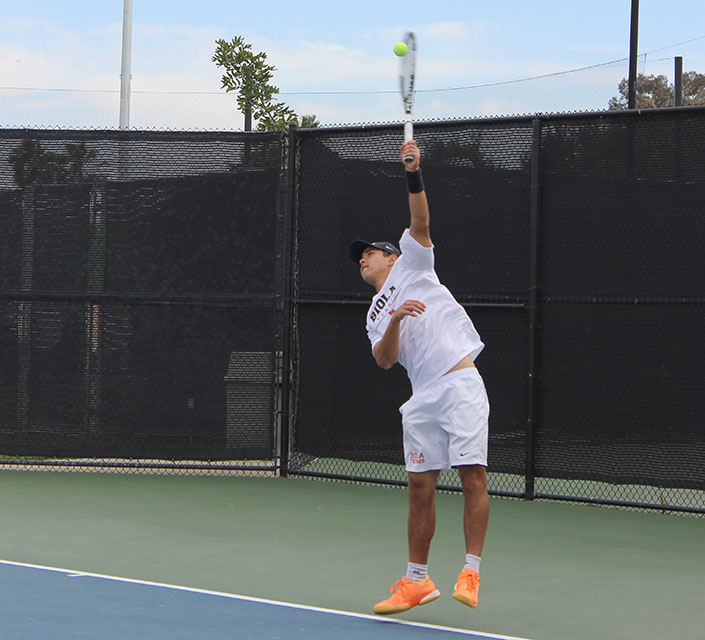 A long two days of tennis awaited Biola’s men’s and women’s tennis teams, as the men played back-to-back matches on March 17 and March 18, with the women also competing on March 18. The men faced The College of Wooster on Friday, sweeping the Fighting Scots 9-0 before both teams took to the courts on Saturday against the San Diego Christian College Hawks, with the women losing 8-1 and the men dropping their match 6-3.

The Eagles had smooth sailing against Wooster in all but one of their matches. On the No. 3 doubles court, the junior duo of David Garcia and Michael Vartuli barely pulled out a 9-8 tiebreaker victory.

Head coach David Goodman gave one of his freshman players a chance on the court, as Jacob Vanderbeek played on the No. 6 singles court for the first time this season. He dispatched his opponent smoothly by a score of 6-1, 6-0.

The next day, the women started out play against No. 8 ranked San Diego Christian with their six singles matches, which they all lost in short order. The women’s only win of the day came on the No. 2 doubles court, where freshman Lauren Lee and senior Brooke Sanford fought bitterly to get the 9-8 tiebreaker win. The pairing of Lee and Sanford is Biola’s best team by record this season, as they have won six of their 13 matches together.

Biola won the No. 2 court while the Hawks took the No. 1 and 3 courts, with Garcia and junior Milos Zoric dropping their third court match 9-8 after a 7-4 tiebreaker. The other close match came on the No. 3 court, where freshman Derek James lost his first set 7-6 on a tiebreaker before dropping the second 6-0.

Garcia had a successful singles outing to rebound from his doubles loss, as he won the No. 6 match 6-2, 6-1. The other Eagle victory in singles play came on the No. 5 court, with junior Joe Turnquist defeating his opponent 6-3, 6-4.