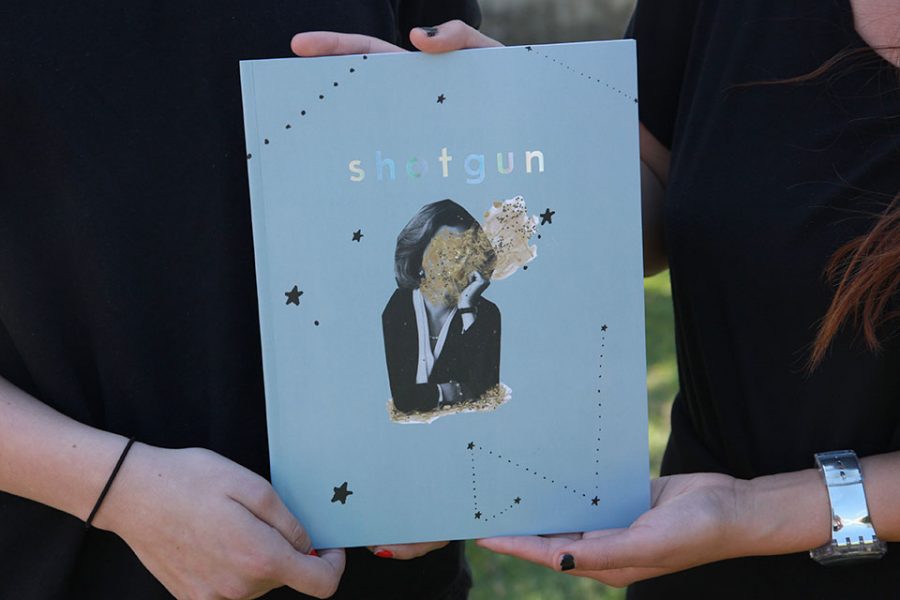 When seniors Alex Bell and Carissa Vera, visual journalism and business majors respectively, came to realize the severe disparity between female and male populations in higher education, they wanted to know why.
Firing back

Through a process lasting nearly a year, the two have struggled and fought to have their magazine, titled “Shotgun,” funded, written and produced with the heart of the matter still beating within. In a study done by the American Association of Professors, women of high education have a higher chance of being ridiculed, discriminated and shot down — the two decided it was time to fire back, though the name “Shotgun” came from a heart of taking the front seat in someone’s life.

“We’ve all had that experience of racing to your friend’s car, or wanting to be active and be the frontrunner cheerleader in your friend’s life,” Vera said. “You want that person who handles the aux cord and tells you ‘No, take the right turn…’ You want someone there who’s excited and listening. So the whole posture of this magazine is someone who’s hearing these stories and taking it in and being that support.”

A struggle for funding

The two felt the heat as finding funding for the magazine proved to be a tougher struggle than they anticipated. After proposing to Biola’s Student Government Association, the team did not receive enough to print as many copies as they had set out — possibly none at all. However, with hearts racing and tears streaming, the two were informed the remainder of their funding would come directly from provost Deborah Taylor.

“I cried,” said Shelby Baumgartner, senior political science major and writer-designer for the magazine. “She said that our voices were valid. She’s another power lady on campus and to have her validate that was just something that kept us going. It was great. It was amazing. There was a lot of screaming coming from Commons.”

The vitality of encouragement

The whole purpose of the magazine is to connect faculty with students in areas where support and encouragement are vital, according to Vera. Though the release date for the one-time printed edition is March 22, the team has hopes for a continued vision — even if the idea is carried on in a different way.

Stories are the lifeblood to the publication, so the stress on different perspectives and the need for a diversity of voices was heavy on the hearts and minds of the chief editors.

Students who have chosen to work for the publication began with a heart for the mission and have often left with a skill or encouragement they never thought they could attain alone. What the two call a “final love letter” to the university has become a reality, and the affirmation they want to stress on faculty and students is the key to the magazine’s success, according to Bell.

“They need someone saying, ‘You can.’ It’s that simple of a thing: you can do this, you’re beautiful,” Bell said. “We want them to feel in their hearts something they feel they can’t do they can do. I think that’s the vision: people on this campus saw good in others, and wanted them to see that in themselves.”