Private colleges converse with legislators to oppose a cut to the Cal Grant. 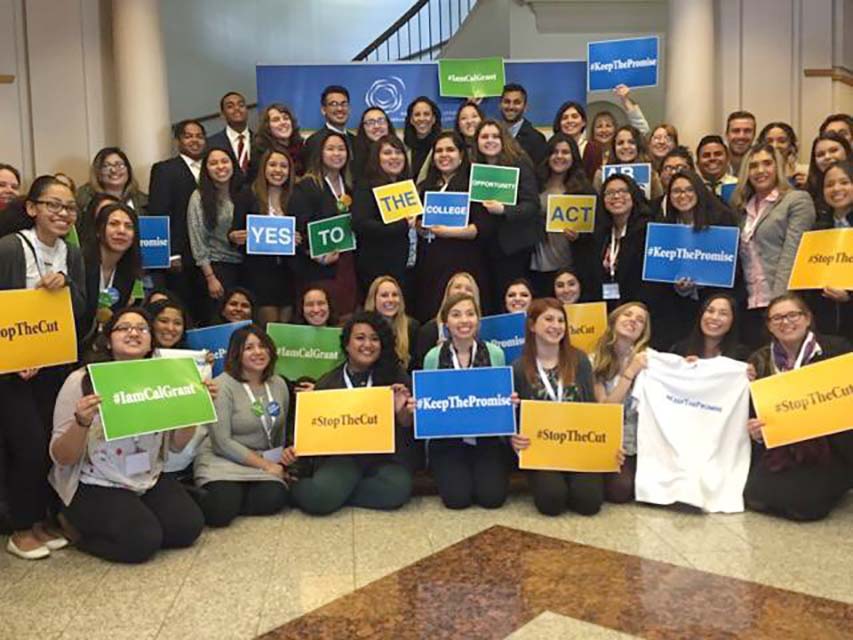 Private schools across California find themselves gathering to fight against Gov. Jerry Brown’s proposed budget for 2017-18, which includes cutting the Cal Grant by 11.2 percent.

The cut comes as part of Gov. Brown’s phase-out of the middle class scholarship program and would cut an average of $1,000 from each individual grant. Although the cut would not affect students currently receiving Cal Grants, if approved, the cut would apply to incoming students for the 2017-18 academic year.

With this percentage, the state’s general funds cost will likely reduce $115.8 million by 2020. Over the course of two years, the last time the Cal Grants were considered for reduction, the Association of Independent California Colleges and Universities planned for the reduction.

“Two years ago there was a proposed cut and the cut wasn’t approved but instead the Cal Grant as a whole was put on hold, on stay. That means no one could propose a cut for two years so we knew that this was coming, we just didn’t know exactly how much they were going to propose for it to be cut,” said Brenda Velasco, director of communications.

The AICCU also connected with California legislators and private institutions across the country to build a campaign in support of not cutting the Cal Grant.

“We are the center voice for independent non-profit institutions in California,” said president of AICCU Kristen Soares. “And in that capacity we represent the sector in the legislative arena and so we have a leadership role to ensure our colleges’ campuses are aware of the cut and secondly we work together to stop this cut and restore the sector.”

Shortly after the budget announcement, AICCU reached out to Biola University Communications and Marketing with help launching the campaign, “What $1,000 means to me…”, due to the fact that the cut would take approximately $1,000 from each individual grant. The campaign focuses on students’ own personal stories and testimonies of students who rely on the grant to attend the college of their choice.

UCM’s immediate response included setting up a table by the fountain to gather student signatures on a letter signed by Student Government Association president and senior business and Bible major Jessica Snow. At a hearing in Sacramento on Feb. 28, two faculty members and two students presented the letter alongside delegates and students from 25 other private colleges and universities.

Each student who attended, all current Cal Grant recipients, shared their personal stories with the legislators, hoping to personalize the detrimental effect the cut would have on thousands of students in California. The four delegates from Biola met with the two elected officials for Biola’s district and received a lot of positive feedback in support of opposing the cut, according to Velasco.

“What’s interesting about that is that [AICCU] shared with us that it’s only .0006 percent of the state budget,” Velasco said. “So this is why there has to be a lot of advocacy, a lot of student stories to share how even though for the state maybe that’s not a big amount, but for a student, $1000 is significant. It can make or break whether or not they attend the school of their choice or they’re not able to attend.”

In addition to talking to elected officials about opposing the cut, delegates also discussed supporting a bill, Assembly Bill 1166. The bill would protect the Cal Grant in the future from any cuts, by changing it to a formula calculated from a student’s GPA and annual income. However, if the bill does not go through, Biola has created a short-term solution to assist the incoming class for next year.

“We have a contingency of resources to be able to fund those students if the Cal Grant was cut in the fall,” Velasco said. “So we have a short-term solution and so if that were to happen, then we would implement the short-term solution and then work on a lot more long-term solution because we care about our students that are obviously applying and trying to enroll so we would take care of them and make sure they are still able to attend Biola.”

Future hearings will occur on March 14, which President Barry Corey will attend, and the budget will be revised again in May, before being enacted in the summer. Freshman biological science major Desmond Simmons attended the previous hearing and stressed the importance of continuing to fight against the cut.

“It gives us the choice of choosing public versus private,” Simmons said. “So raising awareness of not cutting that because it’s literally what’s bringing kids to school and for them to make a better future for them and their community so if we cut that, less people are going to a school of their choice and then less people are in the workforce… So I feel like it’s such a big part of what’s bringing up this next generation. We can’t just cut it.”