That Time I… was thrown into conservative chaos

In attending CPAC, I never thought I would see so many contrasting views on conservatism. 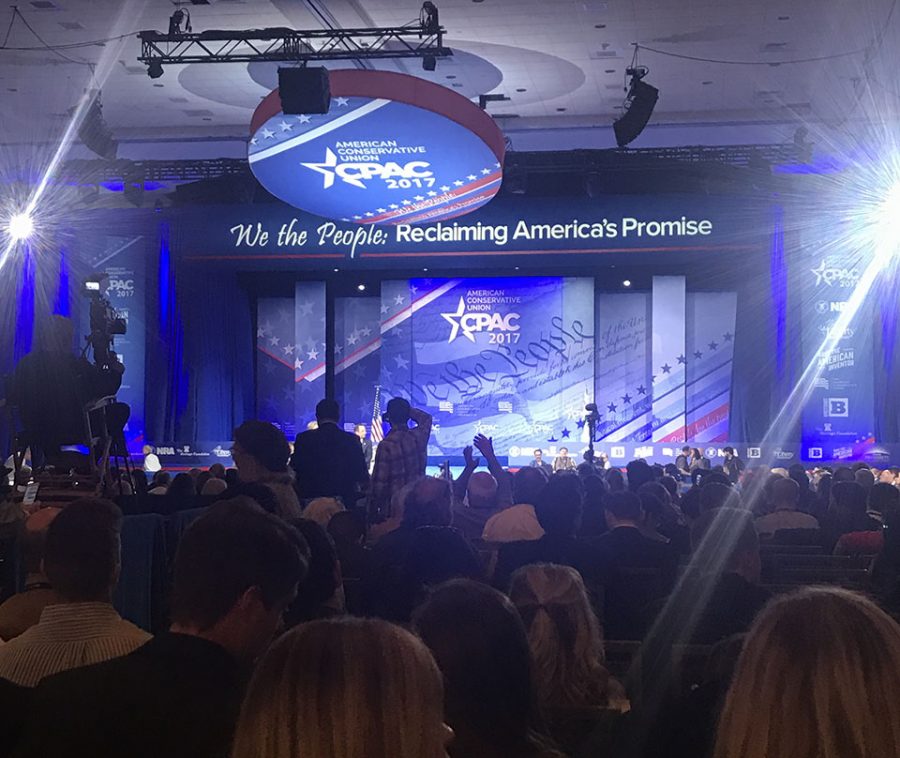 “OK, I’m buying my plane ticket right now,” I said spontaneously, not 10 minutes after my friend Josh told me he was going to CPAC, the Conservative Political Action Conference. So there I was, about to head off to Washington, D.C. to experience a world of what I thought would be a bunch of raging conservatives.

Before I get into this conservative chaos, let me tell you a little bit about my background. My family leans left and always has. With a liberal family history, dealing firsthand with social issues like homosexuality and abortion, I really had to decide on my own what I stood for.

Biola presented me with an internship opportunity in Washington D.C. the summer going into my junior year and I excitedly took it. With little knowledge of conservative news or politics I was thrown into a conservative internship, writing articles every day on political happenings. Let me add: I was encouraged to write as much conservative satire as possible.

This opportunity gave me the foundation of my beliefs. I felt I finally knew what I wanted to stand for as a young woman in America. And this is the heart of why I went to CPAC — I was itching to learn more about the GOP. What really is going on right now? What is Trump doing to adhere to his promises? I wanted to further learn how to grow and have critical discussions and that is the something only these crucial college years so abundantly offer.

So, Wednesday immediately threw us in the thick of conservative chaos by us attending a live taping of Fox News’ Sean Hannity Show. As a college student, I thought I knew a decent amount about politics, but listening to Sean Hannity made me realize I did not know everything I thought I did, and that was OK.

So what can college students do to be a part of this new era and movement in politics? During Hannity’s taping, he interviewed Kellyanne Conway, Trump’s campaign manager. Her words directed towards millennials rang true to me.

She explained to us that social media is a mode of communication for people, not the main way of communicating.  She encouraged us to live in real time.

As far as progressing in a career, she boldly told us that we should be willing to hear no. After the taping I had to giggle at my “fake it ‘til I make it” mentality when it came to conservatives. There were so many different types of conservatives with all sorts of opinions. What was mine? I did not really know what to say to all these kids.

For example, libertarians have the belief that stands for individual freedom and the right to pursue happiness in any way you choose as long as you do not hurt anyone else, and as long as you do not take their freedoms. There were a lot of these sorts of people at CPAC. I was also surprised to see that many libertarian college students at CPAC swung left on many social issues believing in the freedom to choose whether a woman can get an abortion or the freedom of same-sex marriage.

However, opposing many libertarians, a certain passionate libertarian college student named Coleman made a point at one of our breakout sessions about same-sex marriage that got me thinking.

He asked how America can have freedom of religion but churches cannot stand by and assert their view of freedom by preserving their views of marriage.

So what’s going on with this new conservative movement? What exactly are we conserving? Larry Arnn, the president of Hillsdale College, defines conservatism as the conservation of principle.

“America begins on a day. It is self-evident truth all men are created equal. The forming of our nation: the form is provided in our constitution. If we are going to be conservative, we have to conserve the constitution,” Arnn said at CPAC.

There was also an intriguing discussion on education Thursday morning that illustrated the notion the education system is failing our kids. I was surprised to learn 1.3 million minors drop out of school each year. The conservative party now is striving to make equal opportunity for all students and their families to get to choose where they go to school rather than be hindered by their district.

And then Trump spoke…

Then President Trump spent the first 10 minutes discussing “fake news” and how he perceives the media as the enemy. He criticized news platforms like CNN and the New York Times for all of the “fake news” going out about him. After his “fake news” rant, he stated, “Never underestimate the people.” He went on about his victory and how the “people” won with his presidency. This was ironic to me because he spent so much time bashing the “people” of the media.

He talked a lot about what is going to happen in the future with this new “movement” of the conservative party.  He stated, “The conviction of this movement is that we will put our citizens first.”

“Fascist!” a college-aged student yelled at Trump in the middle of his speech. The boy was escorted out by security and Trump did not even give him a second glance. Trump concluded his speech by stating, “We’re all equal in the eyes of the almighty God. As long as we have faith in each other, and trust God, there is no goal we cannot reach.”

I left the conference with a sense of contentment because my knowledge of the GOP had been strengthened. Not only that, but I had a greater sense of my role as a young individual living in a nation that is evolving and changing. Whether or not Trump is going to be the savior of our country he claims he will be, I now know that I am equipped to conserve the foundation of our country under God.