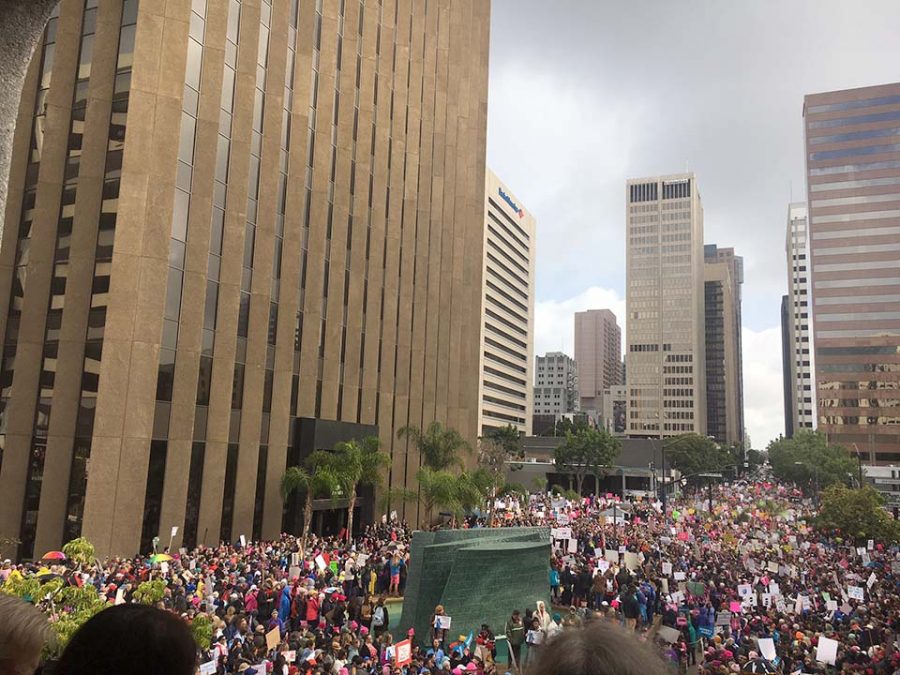 *Editor’s Note: The topics, individuals and groups covered in the Chimes do not necessarily represent Biola University, nor are they endorsed by the university. “Planned Parenthood Defenders” groups are not approved by, sponsored by or affiliated with the university.*

Morgan Mitchell, senior journalism major, began a Planned Parenthood Defenders group out of her home this semester, and she boldly declares a pro-choice affiliation.
Standing up in the face of opposition

In the midst of a troubling and polarizing national climate, Mitchell speaks up for a cause she believes in and will fight for. Supporting a movement that spurs often insurmountable opposition in conservative circles can prove to be an exhausting business — but she refuses to back down.

To Mitchell and the movement she represents, Planned Parenthood is a means by which people who cannot afford health care can still attain it.

Despite an intimidating plethora of misunderstandings behind her mission, Mitchell strives for civility and makes respect her number one priority. One of the club’s active members, alumnus Sarah Sundberg stands beside the movement as well, for very similar reasons.

“I see Planned Parenthood as an essential public health resource, and I also see it as under attack. It’s been demonized for a long time and I was a part of that until about last year after learning about the resources it provides,” Sundberg said.

One of the largest struggles in the Planned Parenthood Defenders movement has been explaining away any misconceptions regarding the multitude of services they offer that opposers may present as fact, according to Mitchell. The process of engaging people in mutual respect has become dire and scarce over the last year — since the organization has been under greater scrutiny.

“What was once a civil disagreement is now being turned into policy and there’s no room for an opposing side. There isn’t room for Planned Parenthood being supported and legally subsidized when people in our government are essentially rooting out any opposition,” Sundberg said.

An important distinction both Mitchell and Sundberg recognize is the split between supporting the health care organization and supporting abortion, the target of the most scrutiny from opposers.

Vastly misrepresented
“We just recognize that [abortion] is going to happen whether or not it’s legal. So the only thing we can do now is try to save women from using coat hangers… [They could] kill themselves or injure themselves,” Mitchell said.

“I would definitely call myself pro-choice as of the past year. I would not call myself pro-abortion,” Sundberg said. “For me, it’s down to the foundation of we’re talking about a person’s internal organs… I don’t want to say that a fully-formed baby isn’t a valuable life, but I also can’t say seriously that that woman’s body is not hers.”

The issue rests with choice, and not in the pro-choice sense, according to Sundberg. The freedom women exercise in what medical procedures they elect for rests with them and them alone. She stresses consent, as well as responsibility.

“I don’t think we have the moral right to control her choices, because even if that woman does not perform the abortion she wants, you’re still forcing her to do something she does not want to do with her body. That’s something that should never be the case. We have to provide consensual practices in medicine,” Sundberg said.

Biola’s Sanctity of Life club advocates for all “Pro-Life” issues, even those pertaining to end-of-life and assisted suicide topics. President and senior political science major Eddie Gallardo explains the club’s views on Planned Parenthood as strained, but stern.

“If Planned Parenthood is like a tree, and abortion is the branches, abortion is a branch that our club doesn’t want. We want that branch removed. So for their club, my question would be — you can support women’s right to health care and choice of health care. We recognize the need there, but we can’t dismiss the life that’s being thrown away as collateral because of that,” Gallardo said.

Sophomore English major and club attendee Victoria Knuppe stresses the importance of recognizing other options, such as other pregnancy care clinics which advocate for choosing to keep the child rather than receive an abortion. Accessibility is a large aspect of the pull of Planned Parenthood to women in lower income areas that do not have access to health care.

“I understand the accessibility of Planned Parenthood,” Knuppe said. “I don’t necessarily think that that is a compelling enough reason to keep Planned Parenthood, because those services are provided for in other places. You have to question what the cost is for this. What is the cost for providing these resources if abortion is going to come along with it?”

While pro-life pregnancy care clinics do exist, Mitchell is careful to note the enormous price disparity between Planned Parenthood, which is federally funded, and care clinics that provide other contraceptive and health services. Regardless of apparent disagreements, both Sanctity of Life and Planned Parenthood Defenders express an interest in talking out their differing opinions.
The importance of civil discussion
“So I don’t think we have quarrel with them providing health services to women. If Planned Parenthood provides contraceptive services to women, that’s fine,” Gallardo said. “It seems like their interests are more than just the company. So maybe a women’s defense fund, or a healthcare defense fund. All that to say, we recognize their passion and that’s a great interest they want to serve for women. It’s something we have in common.”

Mitchell agrees on many points in the mission statement of Sanctity of Life, stating their views are similar in regard to assisted suicide and euthanasia regulations. Gallardo stands on similar ground.

Commenting on the value of civil discussion, Mitchell recalled a protest she walked in where a collection of men stood against a pro-Planned Parenthood march reading Bible verses out of a megaphone to the crowds passing by.

“If it’s civil, I love it. I love having discussions about it,” Mitchell said. “I wanted to tell them I really understood where they were coming from, but you’re not going to have a good discussion like this. Discussion is so important, but this is not discussion. He was just reading bible verses, but you couldn’t even hear him over the chanting and yelling.”

Cherish Travnick, senior art major and Sanctity of Life attendee, sums up the agreements between the two sides in the care people involved must give to the woman in crisis.

“You have to get to the root of that choice and you can gain awareness and education and preparation for that person and how to choose, then that’s what going to direct or change society, or change the person, or change the whole controversy and conflict with abortion. It’s the only thing that can change the rate of abortion. It starts with that individual and how they really react to the crisis they’re in,” Travich said.

The Chimes published a news brief on the group’s beginning, which readers can access here.