Regular season comes to a close

A pair of wins for Biola women’s basketball ensures a favorable postseason spot. 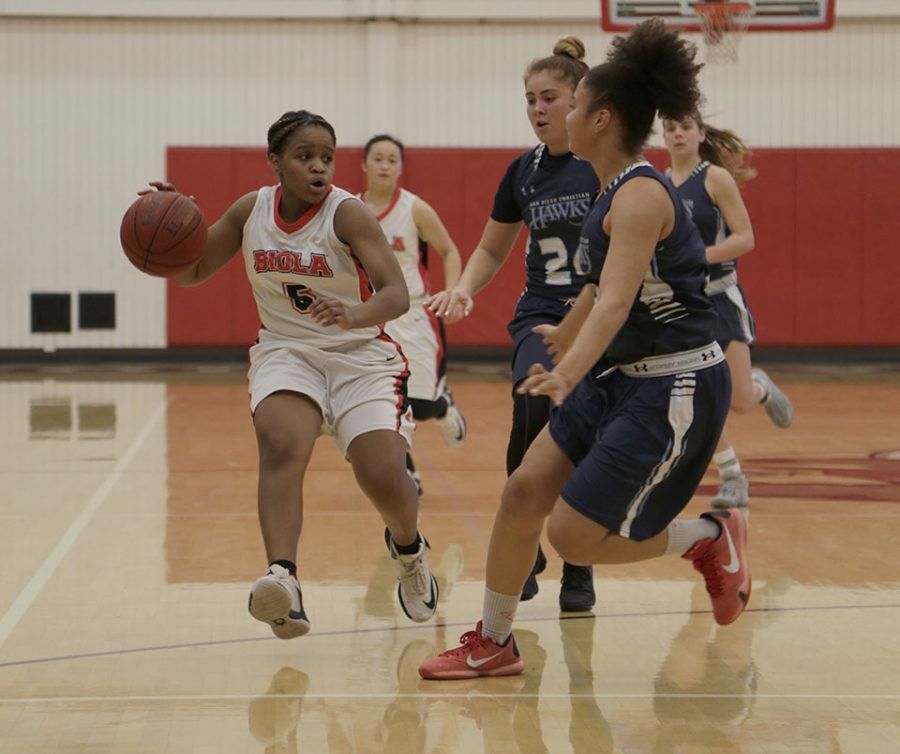 The Eagles women’s basketball team had a very successful week, grabbing a 59-51 win over the Hope International University Royals on Feb. 18, followed by a 74-47 blowout victory over the San Diego Christian College Hawks in their last-ever Golden State Athletic Conference regular season match on Feb. 21.

Hopes crushed
The Eagles now sit at 22-6 overall and 13-3 in conference and have secured a second-place seed in the GSAC tournament that starts March 2.

Biola traveled to Fullerton to face Hope International, a team who came in without a win in conference play and who the Eagles beat by 21 in their last meeting. In the first half, Biola had a terrible shooting performance, finishing the half at 27.5 percent from the field while Hope shot 40 percent. That translated to the Royals’ 27-24 lead at half, with the Eagles’ 27-15 rebounding advantage providing their only way to stay in the game.

Junior guard DeMoria White led with 18 points, senior guard Annie Park scored 14 and senior forward Joclyn Kirton tallied yet another double-double with 12 points and 11 rebounds. Freshman guard Kayla Macedo had some quality minutes off the bench in the second half, contributing seven points.
Clipping the Hawks
Following that win, Biola stepped back into Chase Gymnasium on Feb. 21 and faced the 6-9 in conference San Diego Christian Hawks. Similarly to the Hope game, Biola got off to a slow start in the first half. They took a six-point lead into the break, but San Diego looked like they had all the momentum and could easily overcome the difference.

Again reminiscent of the Hope game, in the second half Biola’s offense caught fire and blew the lead wide open. The Eagles shot an excellent 53.6 percent from the field in the half, outscoring San Diego Christian 43-22.

Junior guard Khadidja Diakite came off the bench and got a quick double-double with 10 points and 10 rebounds, and sophomore forward Sara Dougan also registered 10 points. Biola’s top three scorers showed up again, with Kirton scoring 20, Park finishing with 17 and White ending with 11.

“I think they got the team to play harder defensively, to be more committed to rebounding and having poise on the offensive end,” said head coach Alan Nakamura. So the player leadership and then everybody buying in was really the key to us playing better in the second half.”

With over a week and half to go until the GSAC tournament, Biola has one more scheduled match, a senior-night home game against the Bethesda University Flames on Feb. 25 at 5:30 p.m.