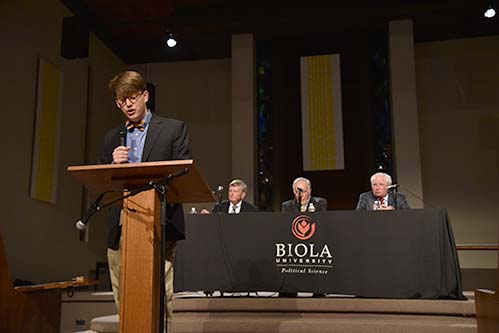 the most effective — justice of the entire century
Michael Uhlmann, professor of government at Claremont Graduate University, Ralph Rossum, professor of political philosophy and American Constitutionalism at Claremont McKenna College, and John Eastman, professor of law and community service at Chapman University, spoke on Scalia’s adherence to the text of the United States Constitution, his effect on the Supreme Court and his personality. After their individual speeches, they answered a series of questions from the moderator, chair of the political science department Scott Waller, and the audience.

Uhlmann began the talk by describing his personal experiences with Scalia, describing him as a Christian gentleman with an extraordinary work ethic. As a justice, Scalia believed one could discover truth through debate. Ullmann also discussed Scalia’s gift in rhetorical ability, in which he had the habit of arguing aggressively with others.

“You could even make the case that he may have been the most successful — the most effective — justice of the entire century,” Uhlmann said to the audience.

Though his skill as a justice was exemplary, he also possessed a renowned sense of humor, according to Uhlmann. Finally, he possessed deeply-held religious convictions, which fueled many of his political values.

“To explain him, his ideas, his attitudes, [his] work without references to his deep reverence for his creator is to miss a large part of the man,” Uhlmann said to the audience.

After Uhlmann, Rossum delivered his analysis of Scalia’s method of interpreting the law. He said Scalia rejected the view of the Supreme Court as a fluid entity that can interpret the Constitution according to the opinions of the times.

“Scalia believed that the main danger of judicial interpretation of the Constitution, or for that matter, of any law, is the judges will mistake their own predilections for the law,” Rossum said to the audience.

Scalia argued justices should instead study the text of the law closely and with respect for the historical context in which it was written. After hearing about Scalia’s method of interpretation, freshman business major Coulton Stoody felt motivated.

“It’s inspired me to look at every single book that I read carefully,” Stoody said. “I’m inspired to go to law school now.”
the life of a great man
Eastman closed out the series of speeches by recognizing Scalia’s effect on the court’s view of the Constitution. After being reinterpreted with each new judicial opinion, the document had become practically irrelevant by the time Scalia became a justice, according to Eastman.. Scalia’s textual analysis of the Constitution transformed the court’s understanding of law.

“You take that view of the law, and Scalia’s own disposition to being a sparring partner, and you can see a lively bench that hadn’t existed before and doesn’t exist now,” Eastman said to the audience.

After finishing their speeches, the panel took questions from the moderator and the audience. Topics included the application of the Constitution to the states and the direction of laws concerning religious freedom.

Uhlmann believes students have many options of how to react to the symposium.

“Think about it, talk about it, argue about it,” Uhlmann said after the event. “This is the life of a great man and he deserves your respect.”