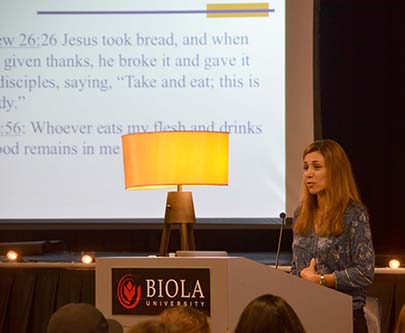 After turning away approximately 1,000 women during the Torrey Conference session, Torrey directors organized a second “Released and Free from Sexual Sin and Shame” event on Feb. 16.
Reconciling sexual shame

“I wanted to offer the opportunity again because the desire to come and listen and learn was so great,” said Tessa Robertson, Talbot graduate student and Torrey Conference director.

Fleming directed her lecture towards women who have felt ashamed either because of their own decisions regarding sexual temptation or because they had the decision taken from them. She claimed recovering from shame becomes easier when one’s brain rewires to saying yes to something positive rather than saying no to the temptation, similar to the strategy used by Alcoholics Anonymous.

“I really liked her, not just saying no or setting rules, but her really being able to redeem the two and Jesus, and to not just set the sexual and the sacred on opposite sides of the spectrum but to merge and bring it before the Lord and find redemption in that,” said Angela Cho, Talbot graduate student.

The number of women who were interested at Torrey Conference can be an indicator of how common this kind of shame among women has become, as well as the difficulties in finding answers and healing among some Christian communities.

“I think it’s core is to kind of regain our dignity and our freedom and integrating our sexual desire with our faith. And understand that they are sacred and honorable. And it’s really hard to live that message out if it’s only about rules and repression,” Fleming said.

Relating her message to Jesus’ compassion to the woman at the well in John 4, she emphasized the importance of addressing this kind of shame in a way which encourages a deeper faith as well as deeper relationships with others. Many attendees found this helpful in their own lives as well as in influencing others around them by utilizing this knowledge.

“Being in a very serious relationship and being in leadership positions, realizing that there is such a need to talk about these things and that the huge inconsistency is men talking about sexuality and women talking about sexuality, is just super frustrating and I feel that in my own life and then see that in the life of so many people and that just needs to change,” said Kristin Stone, junior communications major.

The event came to an end as Fleming answered final questions from the audience and shared about a female-only program offered by the Biola Counseling Center, called the Freedom Group, focused on discovering triggers, finding community and receiving redemption.