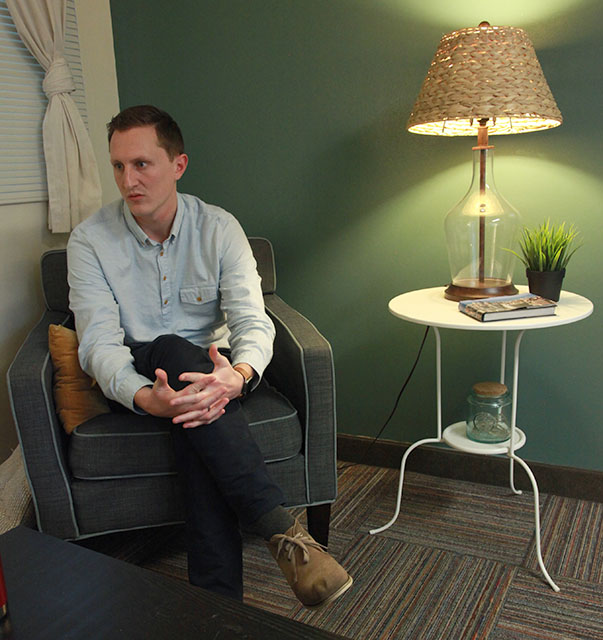 Empty dormitories, silent campus cafes and a deserted library. Biola’s campus resembles somewhat of a desolate village, abandoned by its inhabitants for the duration of Christmas break and interterm. Resident Directors and Advisors deal with students who choose to move back early, and yet, their jobs and lives seem on hold when the campus goes from 6,000 students on Dec. 16 to only 40 on Dec. 17.

What is it like being here when no one else is as an RD, and what does your job entail when everyone is gone?

Lounsbury: “A lot of that is going over last semester: what went well and didn’t. We go over programs. We go over personal reflections on [the RA’s] leadership and what have they learned, what break was like for them. Then we take a little time to set up the semesters, so we take some time out for planning programs for the rest of the semester…. We prep for RA selection and hiring. Our RA hiring process has typically taken place during the first three weeks of February, so there’s a lot of preparation that goes in before that.”

How many RAs stay on during interterm?

L: “Probably one or two per building, and really their only responsibility is to do duty. So they don’t get paid a ton for it, but it’s a way that, if they’re on campus and taking a class or something, all they have to do is be in here from eight to 11 and do duty just like normal.”

How do you enforce community standards, like open hours, during interterm?

L: “The RAs do rounds during interterm, which is where they check the floors, and that’s a way to enforce open hours. They’re doing rounds every night because they’re on duty every night, even on the weekends.”

How have the plans that you’ve been making over interterm played out during the semester, like your all halls and your training for the RAs?

L: “During training, one thing we do is plan the first All Hall together, which we just had last week… and it went well. RAs are required to do three programs per semester… They work a lot on the big ideas of those programs, not so much the details, but more, ‘What do you want it to look like? What are you hoping to help residents learn?’ One of those events has to be educational, and one of those events has to be intercultural, and then the third one can be a variety of things. It’s kind of more what their preference is… And then a big thing we did in January was selection prep. We’re in the middle of that right now so, going well and figuring it out.”

Wyatt Redfern, RA in Horton Hall South, found the lack of students on campus peculiar but enjoyed the freedom of campus locations, such as the cafeteria.

What does your job as an RA look like over interterm?

Redfern: “During interterm, I have duty, which means I have to stay in the duty office about half the interterm because it’s me, and the other RAs switch off. We stay in the duty office from nine to 11 and take rounds at the beginning and end, where we walk through the entire buildings making sure everybody’s doing well, and then I just have to stay on campus during that time and that’s about all.”

What do you do to enforce community standards over interterm?

R: “Most community standards aren’t often broken during interterm because there’s not just a lot of people there. If I am, it would be very similar to just how it’s done throughout the semester. One time, there was like a dad in one of the rooms and I had to ask and make sure, ‘Hey, are you a dad? You need to go off [the floor] because it’s not during open hours.’ There are no open hours during interterm, so that’s kind of different. A lot of people just didn’t know that, so you have to just inform people.”

Is it weird to be on campus when nobody else is?

R: “Yeah, for about the first week it’s kind of odd because campus seems almost like a ghost town, but it’s also nice. You get to go into the Cafe and there’s nobody there and you can just get whatever you want. The gym is always open.”

What are your hopes for the semester for your floor as an RA?

R: “My ultimate hope for the semester is to build a community of guys that love the Lord first and love each other second. And they can find strength through those two sources.”

Matthew Francis, Blackstone RA and junior business administration major, enjoyed quality time with the small group on his floor that stayed on campus and appreciated the weeks to prepare for the coming semester.

What does your job as an RA look like over interterm?

Francis: “Over interterm, our job is very relaxed. It just means being on call from 8 a.m. to 8 p.m. and then being in the office for a couple of hours. Other than that we’re not doing a lot.”

Is it weird to be on campus when nobody else is?

F: “Yes, it’s pretty weird because you’re there to be a resource to people, but there’s not a lot of being to be a resource to. I will say though, my floor had like six or seven guys, so it was pretty cool to be able to interact with a small group. We played a lot of soccer together.”

Why did you decide to stay over interterm?

F: “It’s free housing, you get paid a little bit and I was able to adjust into spring semester easier than showing up a week before it starts.”

What are your hopes for the semester for your floor as an RA?

F: “Just more engagement. More leadership from the non-RAs on the floor. Just empowering them to step up and plan events, and help them with that, but not being the main role.