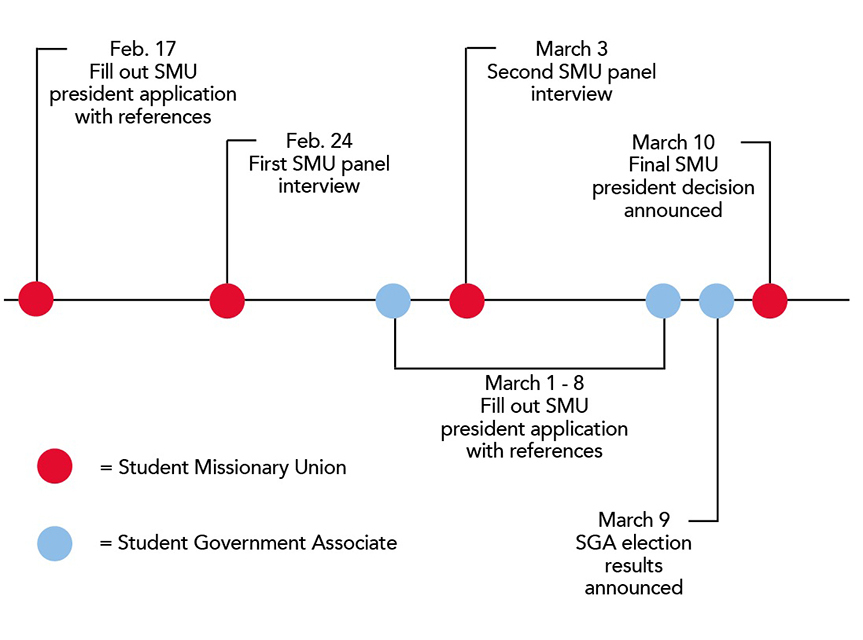 After two years of only one candidate running for president, candidates for Student Missionary Union president must now submit an application and proceed with an interview process, rather than running for election.

Senior public relations major and director of administrative services Angel Jesudasen proposed the change to the elections committee in October, hoping to refine the process to better fit the role of the SMU president.

“The more and more I was a part of it, the more I realized that the way the SMU president was chosen wasn’t really being effective,” Jesudasen said. “Their sole purpose is [not] to represent the students, but more to serve the board of directors… and then they serve their staff so that their staff can serve the students.”

A test of experience

After submitting an application detailing their work experience and providing references, each candidate must sit through two rounds of panel interviews composed of faculty, student leaders and members of the SMU board of directors.

Each panelist will receive a pre-set rubric structured around five to 10 categories covering knowledge of SMU, leadership style and passion for diversity. Jesudasen, senior public relations major and director of marketing and communications Sarah Giovannini and director of Student Programming and Activities and Student Government Association advisor Laura Igram designed the rubric. The final rubric came from comparing over 20 rubrics from various outside schools as well as different departments across campus.

“It’s not that we don’t trust the students to make that kind of decision, because obviously we want … student input,” Giovannini said. “It’s just that it’s a different way of getting that student input that ensures more groups are being represented as opposed to just having a popular vote where some people might be discouraged from voting.”

The candidate with the highest average score will be offered the position. In the case of a tie, the current SMU president and director of administrative services will make the final decision.

Liam Timoti, senior communications major and SMU president, hopes the new process will eliminate the tendency for the most popular person to win, ultimately continue to help the organization thrive.

“This job isn’t really meant for the most popular,” Timoti said. “Not running against anybody is kind of hard. We feel the interview process helps encourage more people to want to apply and it would also be a lot more refined in getting the right person.”

Applications for president are due on Feb. 17 while panel interviews will take place Feb. 24 and Mar. 3. The final decision will be made Mar. 10, following the same timeline as the SGA elections