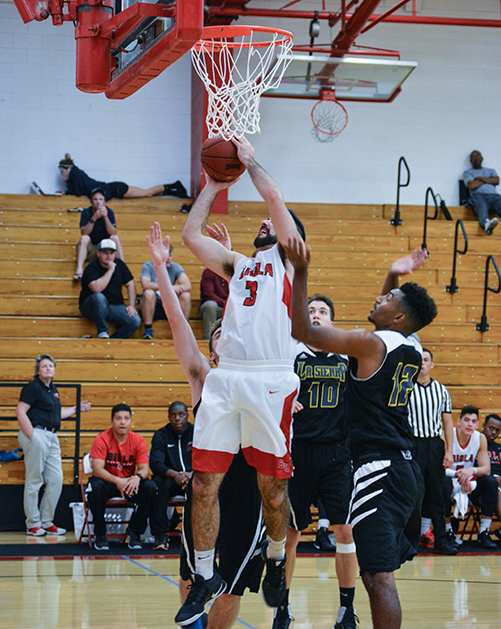 The Eagles have played back-to-back games only once before during this season. However, with the 2016-17 Hope International Classic in the books, the Eagles proved they can play great basketball one day and go into the next day without a dropoff in play.

The start of Biola’s Dec. 2 matchup against the Southern Oregon University Raiders did not go as the Eagles had hoped, as the defense struggled to defend against the Raiders’ shooting. However, the defense eventually tightened up and the Eagles’ frontcourt took the reigns of the offense and moved the Eagles to a commanding lead at halftime. On the forefront of the Eagles’ frontcourt scoring — senior forward Jeff Gonzalez, who continues to establish himself as the premier scoring option when junior guard Dakari Archer has an off night. Against Southern Oregon, Gonzalez dominated with 18 points and eight rebounds en route to Biola’s 78-61 victory.

It becomes blissfully redundant to talk about the offensive finesse of the Eagles’ big men, but their play has been on a new level Gonzalez stood out as the star of the game on Dec. 2 but on Dec. 3, sophomore forward Alex Talma continued to breakout in a big way.

Against the Shepherd University Thundering Herd in the second game of the Hope International Classic, Talma generated 21 points on 7-9 shooting in the Eagles’ 76-45 win. In addition, Talma fell one rebound shy of a double-double as he shredded the lowly Shepherd University defense in the paint by grabbing nine boards, including seven on offense. As he gradually carves out more playing time in head coach Dave Holmquist’s starting lineup, the 6’8” sophomore from Aukland, New Zealand has put up 11.1 points per game on an impressive .507 shooting percentage while grabbing 6.8 rebounds per game.

Despite the Eagles’ big weekend, the Eagles’ three-point shooting dilemma continued to rear its ugly head. In their matchup against Shepherd University, the Eagles’ season-long three-point struggles hit an all time low as they attempted 24 threes and only made seven of them, good for 24 percent, well under the team average on the season. The Eagles’ season average of 36 percent from beyond the arc places them sixth best out of nine teams in the Golden State Athletic Conference.

The Eagles’ 2015-16 season hit all-time highs for the men’s basketball team as they started 9-1 in their first 10 games and eventually finished the season with a 30-4 record. Before this season started, many knew the Eagles had talent. However, with the loss of dynamic guard Terrell Funches, it was hard to see this year’s team replicating last season’s success. However, this Eagles’ roster has bettered the 2015-16 team’s first 10 games as they now own an unbeaten record at 10-0.

Biola will come home for their next game on Dec. 8 as they take on the West Coast Baptist College Eagles at 7:30 p.m.