A representative spoke on the trauma in Liberia and South Sudan. 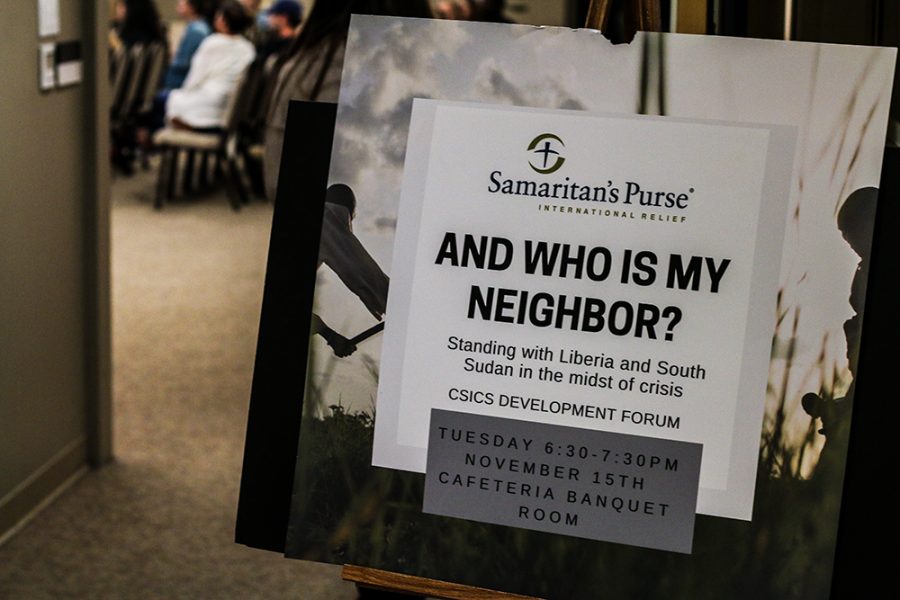 In an attempt to connect students with world wide issues, assistant manager of campus relations for Samaritan’s Purse and Biola alumna Lucy Harig spoke about Samaritan’s Purse’s involvement in Liberia and South Sudan.

What it means to be a neighbor

Approximately 30 students attended the event titled “And Who is My Neighbor? Standing with Liberia and South Sudan in the Midst of Crisis” in the Caf Banquet Room on Nov. 15. Harig shared the histories of Liberia and South Sudan, and how Samaritan’s Purse currently meets the needs of the people there when all other non-profit organizations have left.

“My hope would be that we would expand our understanding of what it means to be a neighbor. That it’s not limited to a geographical place. But, it expands to also include people who we can seek to identify with, who we can see maybe hurting and come alongside them,” said Katrina Greene, associate professor of anthropology and intercultural studies.

Greene opened the event by introducing Harig who then gave a disclaimer for the coming content. She invited the audience to sit in the darkness with her and attempt to feel the experience of the people in Liberia and South Sudan.

“It’s a really hard topic… I’m sure there are a lot of hearts that were broken, but I’m hoping what people heard was that there is hope in Christ and that these people who may feel abandoned are not,” Harig said.

Then, Harig began her presentation by providing the history of Liberia to give context to how Samaritan’s Purse entered the country. They originally came as a post-war disaster response and found themselves in wake of the Ebola outbreak when all other non-profit organizations had left because of the severity of the virus. Harig finished this part of the presentation with a video featuring native Liberians telling some of their stories.

The night continued with Harig telling the history of South Sudan, focusing on the refugees and internally displaced people, a result of civil war. She emphasized how conflict brings about vulnerability within their communities and provides opportunities for Samaritan’s Purse to build churches and supply clean water for the people there. Again Harig played a video, this time with testimonies from Sudanese refugees.

“Both of those countries have really dark, difficult pasts, whether because of war or disease, and so Samaritan’s Purse is able to work there and provide spiritual aid and physical aid to people who are hurting and so wanting to share that story and invite other people into it,” Harig said.

Student encouragement
To finish the session, Greene asked Harig to share some of her journey from graduating with an intercultural studies degree, getting an internship with Samaritan’s Purse and becoming involved since. She hoped to encourage current students considering their future career options.

“Many students… are interested in humanitarian rights and social justice and in working with orphans and other at risk children. And so for them to want to be the hands and feet of Christ is a wonderful passion,” Greene said.

Harig also provided insights into the work Samaritan’s Purse does in these two countries as well as elsewhere around the world. Students enjoyed getting a different perspective on engaging with these issues.

“I wanted to hear about the work they were doing in Liberia and South Sudan, so I was interested in seeing what development organizations are doing firsthand and from their perspective,” said Breigha Sawyer, senior intercultural studies major.