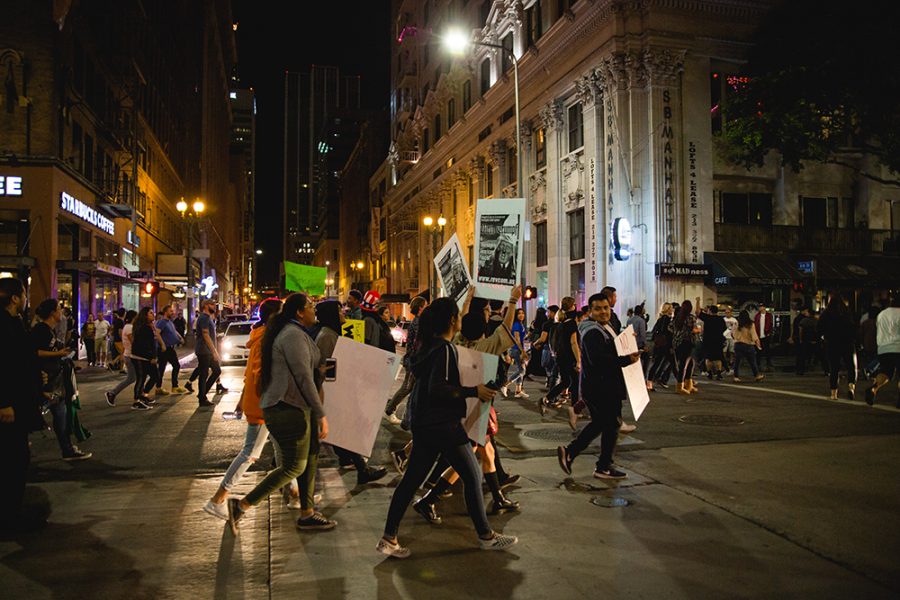 The results of the 2016 presidential election caused protesting off-campus and refusal to accept Donald Trump.

Although the outcome came as a surprise to many, religious groups across the United States did not change their political positions, including white evangelical Christians of whom 81 percent of voted for Trump, according to the Pew Research Center. However, Trump’s evangelical advisors were not surprised at his win because many cast their vote early, according to Time.

While Biola’s campus has remained calm in the wake of the results, shouts of “Not my president!” as well as obscenities directed toward Trump have been heard throughout the country, including Los Angeles County. One protest spilled onto the 101 Freeway Wednesday, Nov. 9, blocking traffic for hours, according to ABC7. Similar protests have occurred since, including one with 1,500 students from Berkeley High School in Berkeley, Calif.

Some Biola students’ initial reactions to the result were ones of shock and anger due to fears being realized. These include junior intercultural studies Mary Tatlock and junior Christian ministries major James Stinson.

Q: How have you seen Biola respond to the election?

“What’s weird is that we haven’t, I think, seen a very visible, active engagement with the election or the ideas until just now in the aftermath. We haven’t seen a widespread discussion or engaging with those ideas in a way that I have seen very clearly… I think because we have lacked the engaging in it prior to this, now the response is so extremely divided in a lot of ways and we don’t understand why. No one understands why because we haven’t been discussing it prior to now and so there’s just, like, a lot of lack of understanding of what has led to the reaction that we see right now.”

Q: Why are “Christian” answers, such as “God is on the throne” or “Stop being angry, Donald Trump is already president” not OK to say?

“So one, it just doesn’t make sense. Two… God has been on the throne throughout many horrifying things we know go directly against his heart for his people. He has been on the throne through the Holocaust. When someone is raped, for instance, you don’t tell them that God is on the throne. You sit with them, you weep. You wouldn’t say that was God’s will. And it’s just frustrating, also… God’s will and his sovereignty is one of the most complex issues that most of us don’t understand and now that it’s being thrown in the face of people who are really hurting as if now people suddenly have a complete perfect understanding and clarity of what it means for God to be sovereign… it’s just kind of like a slap in the face, I guess.”

Q: How can we better support those who are hurt by this election outcome?

“I think my biggest thing, and I talked about this on my post [on Facebook], but just as in Job, his friends sat with him in silence on the ground in grief first, they spoke later and they were misguided, but at first they sat on the ground with him. I think even understanding if people don’t understand pain, sit on the ground first and try to maybe first give people the space of silence, but also listen to what they are experiencing. Think of what this election means for people other than you, I think is the biggest thing.”

Q: In this time of division, how can the church community pursue unity?

“That’s a really, really hard question. I feel like I almost don’t know. It’s hard because it almost feels like the whole messed-up conversation is still hard to have and everything is so cloudy that it’s hard to find a clear future move. But I think even knowing that there are many people on this campus or within the evangelical church in America who sincerely voted for Trump and did not want to endorse hatred or racism, sexism ― I think a move towards unity: making it clear that you will actively fight against those things that are now erupting in our country because of the results of this election.”

Q: How have you seen Biola respond to the election?

“I’d say it’s pretty split evenly from what I can tell. I’m an RA in Hart and I’d say probably 90 percent of my floor voted for him or was really excited about the election… But, it felt like in that night and just walking around the campus, it seemed like people were generally excited about it — the night of it — which was hard for me to see. Which, I think it does make sense, looking at the amount of evangelical voters that voted and just even … a lot of the campus being white and that being primarily a lot of people that voted for Donald Trump didn’t surprise me.”

Q: Why are “Christian” answers, such as “God is on the throne” or “Stop being angry, Donald Trump is already president” not OK to say?

“I think that people feel confused when they see people angry and it makes them feel uncomfortable a lot of times to see people upset and angry, especially Christians, I think, and so I think that their response to that is to just point back to God and being like, ‘You shouldn’t be angry or confused, God is king and Jesus is Lord and you don’t have to worry about that,’ and I think that that’s true theologically that God is in control, but I think that it really just is a disservice to a lot of people and just a way of minimizing the actual fears that people have and the things that they’re feeling… it was just hard for me to see people being very afraid and upset and then Christians, instead of sitting with them and actually listening to them and feeling their pain and having grace on them, we’re just responding with like, ‘Shut up,’ like this isn’t a big deal.”

Q: How can we better support those who are hurt by this election outcome?

Q: In this time of division, how can the church community pursue unity?
“I don’t think people should use Jesus to support their own political side and tear down the other one, but use Jesus as a… thing that we can all look to and something that can bring us all together, and that’s what I’ve been trying to do in just a lot of political conversations I’ve been having, which is really hard. And that’s what I think is the hardest thing about fixing any problems in the church is it’s very difficult and frustrating, but I think that what we need to do is we need to be like, ‘Hey, no matter what we disagree with, we love Jesus.’ And that is what matters, and continuing to build on our similarities instead of focusing on our differences.”