Students learn how to show vulnerability as a community. 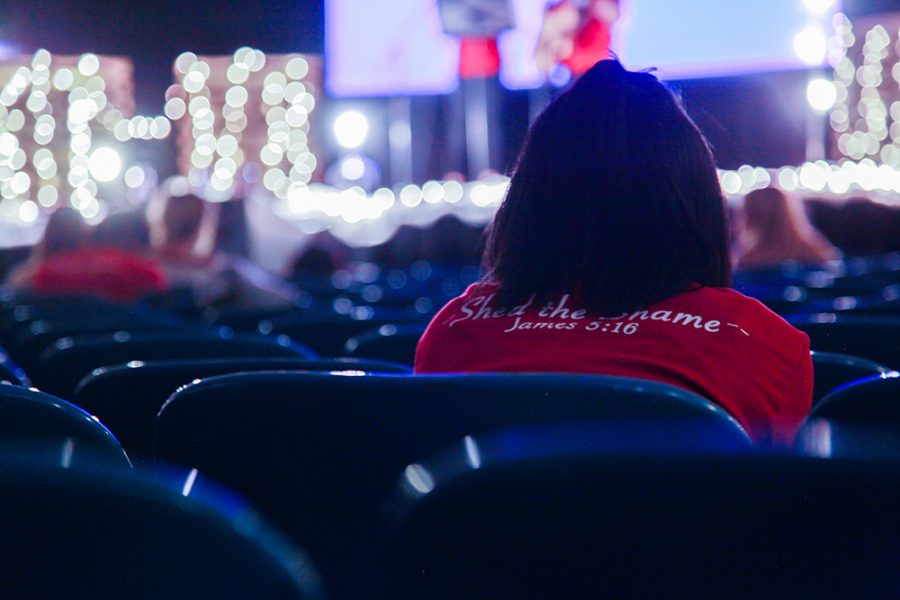 Two weeks after Torrey Conference, female students had the opportunity to dive deeper into the topic of shame on Nov. 10.

Approximately 90 female students attended the second Shed the Shame event to find prayer and solidarity with each other. Senior intercultural studies major Kayla Bumpass and her leadership team centered the event around the theme “Hello, my name is…” and hoped to break down the mold which Christian women often feel they need to conform to.

“As a Christian body we pretend we have everything together, when in reality we have so much going inside of us that we need to take off these masks and be transparent with the areas of life that we struggle with,” Bumpass said.

To open the conversation, a video played showing seven students share of their struggles with shame, ranging from insecurity to pornography to feeling unaccepted as a minority. They also explained the healing process takes time and most of them are still being refined in their identities.

Following the video, sophomore communication sciences and disorders major Kiyana Sagarang shared the final story using dance to express her emotions and provide students a different way to relate to those feelings.

“For so long, I couldn’t really tell [my] story using my words,” Sagrang said. “I had dance to portray that emotion. So I figured in this, I could portray that emotion better through dance and give people a different perspective on what that looks like, that it doesn’t necessarily have to be you talking, it could be you sharing in different ways that you’re good at.”

After the dance, Bumpass gave attendees the opportunity to engage in the conversation with free t-shirts handed out prior to the event. Each shirt said “Hello my name is…” with a piece of tape covering a box underneath. Bumpass asked the audience to write what they were ashamed of on the tape and take it to the Lord during a time of prayer. Bumpass then told the audience to remove the tape, revealing the word “redeemed” underneath.

“I wish this place could have been filled because I know it doesn’t stop at whoever was here. I know that everyone deals with different types of shames and struggles and it really inhibits you from seeing who you really are, who God made you to be,” said Tiffany Mata, sophomore elementary education major. “So to… pray about it and remind yourself of the truth and what your identity really is in ― it was just a good event and I’m sure a lot of ladies really needed this.”

To end the evening, the leadership team held an altar call allowing students to request prayer and guidance for their struggles from the team members who had shared their stories. As people continued to come up, the event went over the allotted hour by approximately 30 minutes, before ending in a closing prayer.

On the way out, students had the opportunity to sign up for a small group with one of the leaders who shared their story, to encourage openness and accountability for the attendees.

“The hope is to have this extend and not just become a one-night thing where wounds are opened and nothing’s done about it,” Bumpass said. “As a community we could be so much stronger. And if we can’t even be real in what we struggle with here with a bunch of believers, how are we supposed to go out into the world and be real with those people?”