Americans should reflect on Veteran’s Day 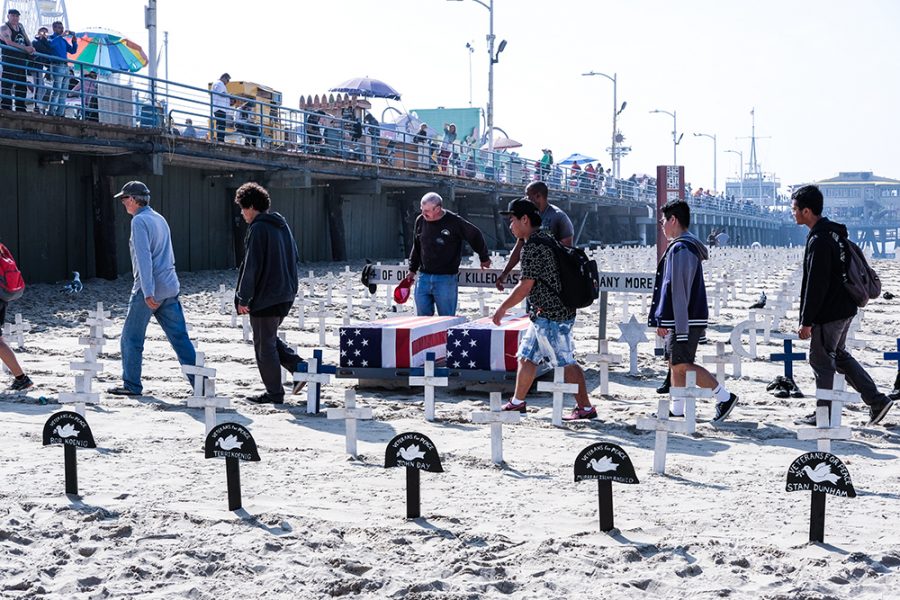 Michael Lindley dons a red hat with “no Trump” inscribed on its brim and a gray sweatshirt as he talks to students from the San Pedro Peace Club on the detrimental effects of war. Every Sunday, members of Veterans for Peace set up the Arlington West Memorial — hundreds of red and white crosses on a strip of sand adjacent to the Santa Monica Pier. Veteran’s Day — once known as Armistice Day — can provide us time to think about the cost of war.

The cost of war

In light of this year’s Veteran’s Day, the Los Angeles chapter of Veterans for Peace will have a two-day event showcasing the cost of war to the public. Veterans for Peace is a non-profit national organization founded in 1985. Students can help Veterans for Peace by setting up the memorial in the morning. With election season over, the cost of war is an issue Americans must all deal with. For us students, we came of age when our country was deeply engaged in Iraq and Afghanistan. As Americans and as human beings, we are obligated to do two things. First, we have to take care of our veterans by making sure they receive sufficient and quality healthcare. Next, we have to find creative ways to reign in American militarism and the military-industrial complex — the marriage between perpetual war and state Capitalism.

“Body of War” is a film directed by Ellen Spiro and Phil Donahue, documenting the life of Iraqi war veteran Tomas Young. Young was paralyzed when a bullet severed his spinal column when his truck was ambushed in Sadr City, Iraq in 2004. His numerous medical complications and his experience in the military motivated him to speak out against the Iraq War and write an open letter to George W. Bush and Dick Cheney, condemning the war. “I have, like many other disabled veterans,” Young writes in the aforementioned letter, “come to realize that our mental and physical health are of no interest to you, perhaps of no interest to any politician.” Young’s medical complications are reminiscent of the complications Vietnam War veteran and anti-war activist Ron Kovic endured. Kovic’s life was portrayed in “Born on the Fourth of July” — a 1989 biopic directed by Oliver Stone.

We should not honor veterans by just repeating the same patriotic slogans and jingoist diatribe every year. Nationalism has done nothing but disillusioned us into thinking our eight hundred military bases and $5 trillion wars are morally justifiable.

We cannot stop war unless Americans find a way to use our public institutions and collective voice to stop the war profiteers and private defense companies. William Astore, a retired Air Force lieutenant colonel and former instructor at the Air Force Academy and Naval Postgraduate School, writes in an article on TomDispatch on how “we desperately need to encourage informed critics and skeptics within the military and the Complex to speak their minds in a way that moves the national needle away from incessant bombing and perpetual war.” Ex-Army Ranger Rory Fanning, Iraq War veteran Michael Hanes, Iraq War veteran Camilo Mejía and even Afghanistan war veteran Pat Tillman all expressed anger and dissatisfaction with the American leadership in the global “War on Terror.”

We live in a country where companies like Boeing are paid $2 billion in bonuses for a flawed missile defense system while veterans are neglected by a society addicted to war. End war or war will end us.