Despite the season-ending down spiral, Eagles look forward to 2017. 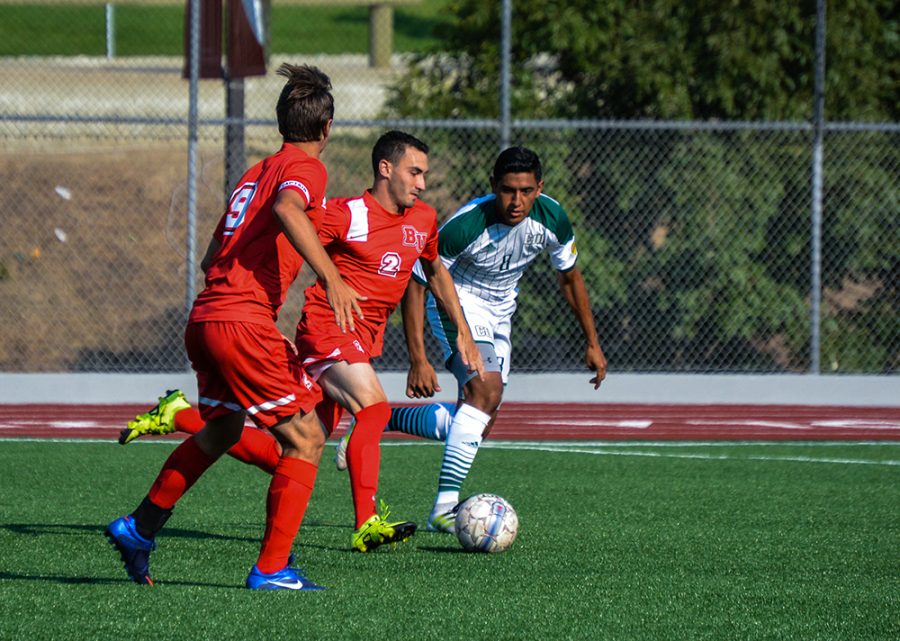 In 110 minutes of brutally close soccer, the valiant Biola men’s soccer team took the No. 3 seeded Vanguard University Lions to penalty kicks with the score at 3-3 and their season on the line. Unfortunately, Vanguard outshot Biola 3-1 in penalty kicks, crushing the Eagles’ hopes of making a National Association of Intercollegiate Athletics Championship run.

With 21:56 elapsed in the first half and the score tied 1-1 early on, senior star forward Leonardo Contreras left his mark as a Biola prodigy in his final game by beating the keeper on a one-on-one opportunity for his seventh goal of the season and the final goal of his Biola playing career. Contreras proved to be a human highlight reel all season and all career with his numerous game-winning goals and flashy plays that excited fans, coaches, students and faculty.

“There nothing like having a group of guys love each other no matter who you are,” Contreras said. “I love this team and I wouldn’t change them for any other.”

After the Lions tied the game shortly after the start of halftime, sophomore midfielder Kousei Mattox continued his strong end to the season by giving the Eagles the lead with his second goal of the year with little over 10 minutes to play in regulation. Unfortunately, the Eagles’ inability to close out games came back to haunt them once more with under six minutes to play, as the Lions knotted the game at 3-3 on a header, forcing the game into two scoreless, ten-minute overtime periods.

After neither team capitalized on golden goal opportunities, the game headed to PKs where the Eagles saw the Lions prevail and move on to the second round of the Golden State Athletic Conference Tournament. Vanguard simultaneously sent the Eagles back home, eliminating any hopes for a NAIA Championships bid.

On the day, the Lions emphatically outshot the Eagles 26-9, marking the Eagles’ defense’s worst game of 2016. The last three games proved detrimental for the highly touted defense, which gave up only five goals through the first 13 games of the season. In fact, the defensive struggles cannot be understated as they nearly doubled their 13-game total by giving up nine goals in their last three matches. In those final three games, opposing offenses had their way by converting nine of their 22 shots on goal for a near 41 percent conversion percentage. To make matters worse, Biola’s defense did not hold their own when they found themselves ahead late in games, as out those nine goals, four came after the 80th minute, each one leading to an Eagles’ loss.

With their final loss of 2016, Biola’s season ceases as they finished 10-6-1 overall and 5-5 in conference play. Although not an improvement in the standings, the Eagles’ backline improved mightily with the exception of the three final games. Junior goalkeeper Igor Puglia provided Biola with goaltending finesse that rivals the best in the GSAC. Despite making its mark as one of the worst offenses statistically in the conference most of the season, Biola’s offense found their niche late in the season as they scored enough to keep the team in contention for wins up until the very end.

Hope for the future

“We might not always get the win, but that does not mean the other team is better than us,” Contreras said. “No one works harder than us. Our prayer to God before the game was, ‘Let your will be done, Lord, and let us praise you no matter what the outcome is.’”

Even though the season had a rough end, the Eagles will have an experienced team to make more noise next season. As it stands, the Eagles will field eight seniors and nine juniors based on the 2016 roster.

“The team needs to keep working hard without thinking of this past season,” Contreras said. “I trust that Coach Elkins has something planned for next season. I am very proud of my team.”