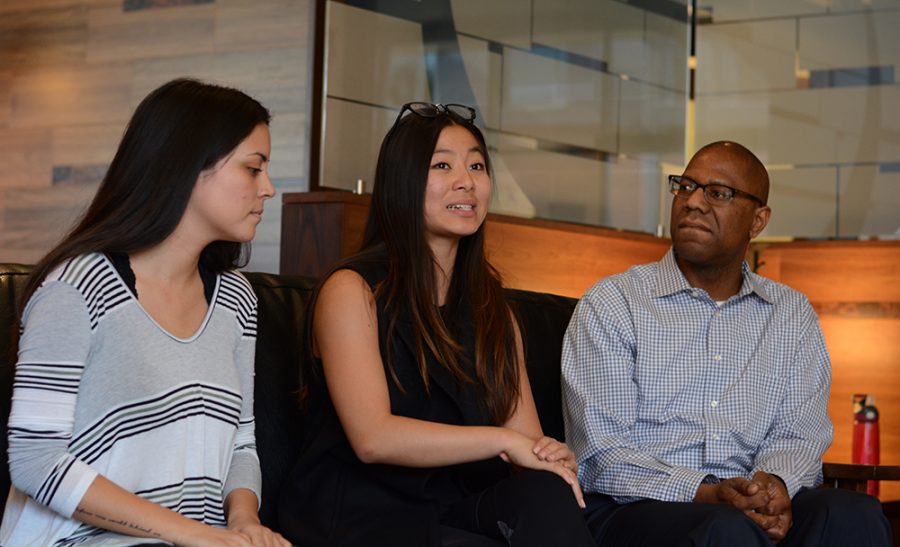 To further the discussion of diversity, Student Enrichment and Intercultural Development invited students and faculty to hear the stories of minorities in leadership on campus at the Mosaic Cultural Center on Nov. 4.

The skill of loving people well

Approximately 30 students and faculty attended the event titled “The Strength of Authentic Leadership” which was centered around three panelists: vice president of Student Development André Stephens, sophomore sociology and communications major Tamara Wu and senior marketing major Gisselle Trochez. They each shared their experiences on how their backgrounds helped them become stronger leaders and break the mold minority students often feel they have to fit.

“One of the main things I hope is that [students] can see themselves as leaders even if they don’t fit the normal stereotype of what… popular culture might think a leader is, that they could still see that there are all different types of leaders and every leader has their own strengths unique and different to them but is just as powerful as another strength,” said junior English major and peer academic advisor Lorissa Payne.

Stephens, the first panelist to speak, discussed how any leader needs the skill of loving people well, regardless of background. He also emphasized the importance of always working hard and understanding how a person’s differences can make an impact in their surrounding community.

“Whether they have a title or official position,… they can be people of influence in their spheres of influence and so they can help bring about positive change in their peers as well as the university,” Stephens said.

Following Stephens, Wu and Trochez shared the challenges they faced coming to Biola as minority students and their journeys into their current leadership positions in Residence Life and the Student Government Association, respectively. They explained how they found their heart for leadership after accepting their differences and then utilizing those differences to be leaders in their community.

it’s God who’s working through us

“It’s not even about us, it’s God who’s working through us,” Wu said to the audience. “I would say don’t base your self-worth on yourself, or even other people, but base it on what God has to say about you.”

After the panelists spoke, the audience had the opportunity to ask them questions. One of the questions addressed how white majority students can engage this topic on a practical level and become more open to different perspectives.

“There’s a norm that we live in, and the norm is a white European norm, so that becomes the standard, typically of what people define as good or excellent,” Stephens said. “I think just again to be inclusive or broad and to think broadly… about others’ approaches to leadership and knowledge. The system works because it’s a system, but you also have to have people who… get the system, but [minority students] are also agitators of the system to make it better.”

Several of the attendees, including junior elementary education major and Alpha resident advisor Savannah Ozier, appreciated the different panelists offering student and faculty perspectives and hearing their stories of how they connected to leadership.

“I think the importance of having different leaders is the fact that we’re different. We were all created different for a reason and the more that we get into connecting with each other and not being afraid of that, the easier it’ll be to be unified and the easier it will be for us to accept that different is OK,” Ozier said.

After the panelists answered questions, attendees had the chance to speak with representatives from various departments on campus offering leadership opportunities for students.