A first-year swim coach sits poised to lead the Eagles into a bright future. 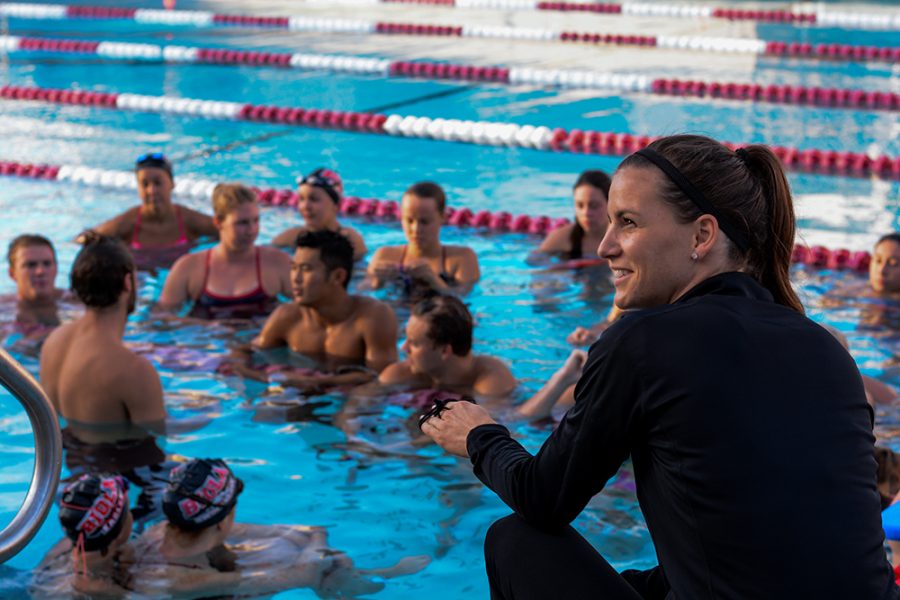 With Eddie Shepard’s promotion to the position of associate athletic director for internal operations in the summer of 2016, he left behind some big shoes to fill. As swim and dive coach for over a decade, he built up the program into a perennial National Association of Intercollegiate Athletics contender whose members constantly broke school records and won individual championships. His successor has the tall task of keeping that positive momentum going as the Eagles gear up to transition to National Collegiate Athletic Association Division II beginning next season.

up to the challenge

So far, Emily Mosbacher seems up to the challenge.

Mosbacher has led Biola swim to a strong start in her first season back with the Eagles.

“I know that it will take me time to learn different areas of how best to do things,” Mosbacher said. “The support that I get here from people that I know and trust — that want the best for me and this team — is huge.”

Mosbacher is coming off a three-year stretch at the Peninsula Community Center Aquatics team in the Bay Area suburb of Redwood City, Calif. but she is no stranger to Biola’s campus. By the time she received her degree in physical education from Biola in 2013, she had spent four years on the Eagles’ swim team and a season as an assistant coach under Shepard.

“It’s been so good just to be back at Biola. My favorite part [of this job] is being back in this community,” Mosbacher said. “Biola’s such a unique place, so just working with the student-athletes and athletics department here.”

Mosbacher is also entrusted with preparing her team for their role in Biola’s upcoming entry into the NCAA division II competition. It is an opportunity she is anticipating.

“It’s definitely the right direction for us and our program,” Mosbacher said. “There’s a lot of excitement around it, from the students to the coaches to pretty much everybody involved. The competition is really going to increase, which gives us even more reason to step up our game.

Her squad will get a chance to do just that when Biola takes on future NCAA rival Azusa Pacific University in their next swim meet on Nov. 5 at 10 a.m. in Azusa, Calif.