Deborah Taylor brings a new perspective to the role of provost and senior vice president. 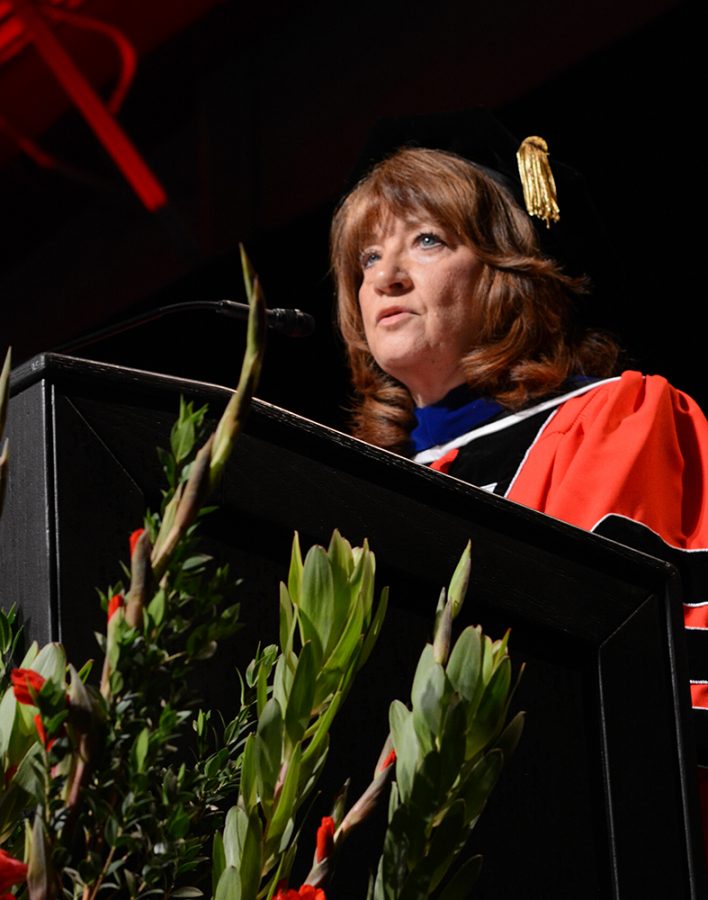 Deborah Taylor made history by becoming Biola’s first female provost and senior vice president. Though the provost discernment advisory council hired Taylor on May 16, she was formally installed into the position in chapel on Oct. 26.

Taylor has initiated several changes to encourage greater gender and ethnic diversity, primarily among faculty, as well as increased transparencies with administration. As the first female provost and senior vice president, along with her passion for diversity, Taylor provides a unique perspective to decisions made in the higher levels of the university.

“Because I did my a lot of my graduate work in diversity, I care a lot about issues of people who have not had a voice,” Taylor said. “There’s lots of situations where women have not had a voice into matters that require levels of leadership. So, to be able to be in that position now, it’s a huge honor and I’m so impressed with how responsive the different groups that I’m in are to the idea of [there being] a slightly different perspective being brought forward.”

Students enjoyed the opportunity to participate in this historic event at the installation chapel. Dayna Bayne, sophomore journalism major, believes having a female provost will improve the university.

“It’s cool that Biola doesn’t exclude people because of their gender and it is a step into… where women are more equal and that she obviously has the knowledge and the skills to be a good provost so I’m proud that she has the opportunity,” Bayne said.

Taylor aims to change current hiring practices in order to improve the environment on campus for women and minorities while also keeping up with excellence. This includes getting rid of outdated forms and bringing more applicants to campus. This year marks a record number of new female faculty as a result of these changes.

“I think it’s just some of these practices and policies that we’ve put into place that are a little more in line with what best practices are in [hiring],” Taylor said. “So I’m all about finding out what are the best practices that other highly regarded schools use.”

In addition to changing hiring practices, each faculty committee must create their own charter and specific policies. Each charter will include their mission and description, as well as guidelines for faculty and staff, such as their election, length of term and qualifications for each position within the committee.

Taylor hopes to have a website up and running soon where these charters and the activities of each committee remain displayed to the whole community.

“We’re creating a website where the minutes and the agendas from all those committee meetings will be accessible to the entire community. So even if a student wanted to know, ‘Well, I wonder what the curriculum committee has decided for new programs,’ you could go in and you could actually look at it,” Taylor said. “So I just want to make it really transparent, what those committees do and what decisions they have made, and then that people can have access to that.”

Along with creating more transparency, Taylor intends to hold more forums with students and faculty in order to allow everyone to have a voice in university decisions. She aims to explain the background and procedures of how administration intends to carry out those decisions. Student Government Association president and senior business major Jessica Snow, will attend university academic council meetings to provide a student perspective.

“I’m always trying to make decisions more collaboratively because I know I am not the smartest person at this university and I know that you make better decisions when you get some different voices involved in it,” Taylor said. “And so that’s been another thing, is more voices shaping the decisions and more transparency about the decisions that are being made.”

Shirley Hoogstra, president of Council for Christian Colleges and Universities, also commends Taylor on her leadership abilities and courage for taking on this position.

“The reason Dr. Corey again exhibited the traits of excellent leadership in appointing Dr. Taylor is because he knows that teams with diverse perspectives from all walks of life and professional experiences lead the best decision making,” Hoogstra said in an email. “The best teams represent points of view that add to the analysis of important and complex decision making. Dr. Taylor brings her whole, God created self to this role. Being an academic leader who is also female is ‘bonus added’ to her already deep leadership capabilities.”