The science building will have a greenhouse and solar panels. 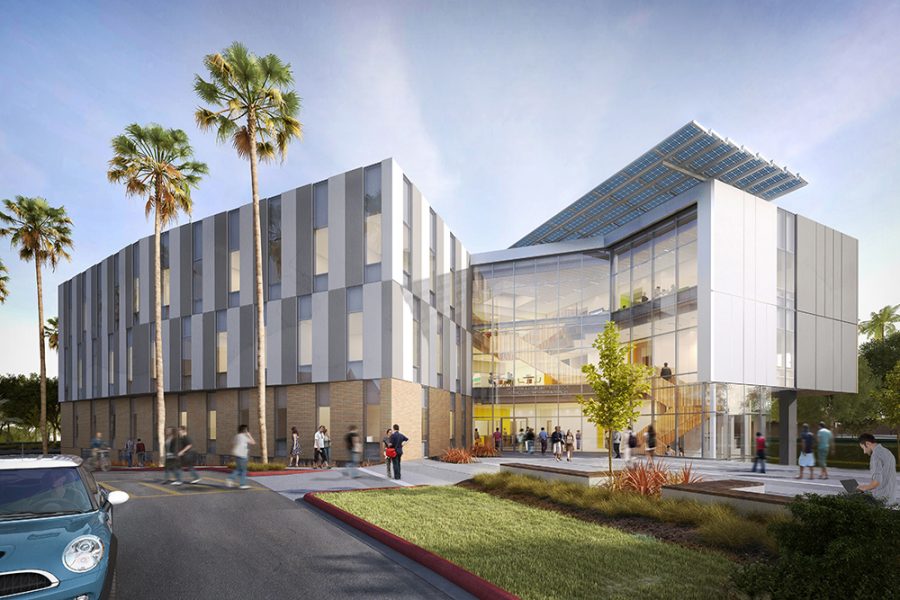 As construction continues on the Alton and Lydia Lim Center for Science, Technology and Health, the plans of solar panels on the top of the building and a greenhouse develop into realities.

The plans for the building have always included a greenhouse and solar panels to benefit Biola and to be in alliance with Leadership in Energy and Environmental Design certification processes facilities management plans the center to be under.

“[The greenhouse] was a request from the sciences. Specifically, they were hoping to have a greenhouse that would be adjacent to their botany lab in the building, so having a third floor outdoor terrace on the building allowed us to have that greenhouse in a place that would be just… a couple of doors away from a botany lab,” said Brian Phillips, director of facilities management.

In the construction process, the third floor terrace will be completed, but the greenhouse itself will be a  pre-engineered and prefabricated unit that an outside contractor will install, according to Phillips. The greenhouse itself, made primarily of glass surfaces, includes indoor lighting, a large sink and ventilation system within the 18- by 27-foot structure. The greenhouse structure has a value of $100,012.

To further increase the environmental friendliness of the building and reduce Biola’s electricity costs, 30 kilowatts of solar panels will be added to the top of the science center, costing $225,000.

The panels are expected to last at least 10 years, at the end of which the solar panels might begin to degrade and have a lower output, causing a need for replacement, according to Phillips. For now the science center is the only planned building to have solar panels because of Biola’s ability to generate power on their own.

“The other thing we have on campus is we have a cogeneration plant, so we generate about 80 to 85 percent of all of our electricity needed for the campus already at a pretty reduced rate, and that’s made solar a little less attractive to Biola than it might be for another customer that’s buying all of their energy from the utility,” Phillips said. “But as the campus grows and our power demand increases… solar’s starting to make more financial sense for us.”

Going for the silver

In terms of LEED certification, Scott Kaufman, assistant project manager for C.W. Driver, believes the science center will meet the silver level of LEED certification. While platinum is the highest level that a building can reach, Kaufman explained it is not reasonable for all buildings to seek platinum level.

“Building green is not the most cost effective, so it’s kind of figuring out what’s realistic for this building on a financial basis,” Kaufman said.

The science center has a complicated design and adding every available green component would drive up the price of building. Kaufman explained simply being declared a LEED-certified building is extremely prestigious, and the higher levels, like silver and platinum, acknowledge how much further the project team went in pursuing sustainability.

The construction team also pursues sustainability through their construction methods. Kaufman explained C.W. Driver uses materials within 500 miles of project sites in order to reduce their carbon footprint. The team also moves construction waste to specific dumpsites that recycle at the highest level, and only purchases wood certified by the Forest Stewardship Council to ensure projects do not contribute to deforestation.

The several steps and processes listed above help in reaching the goal of LEED silver certification, which start with registering the project and then following adherences in designing and building, according to David Gibney, M+W Group technology director for sustainable design.

“The good thing about LEED certification is that it’s not just people making claims, it has to be audited, there’s a process where there are standards to be met and a lot of these standards are created by outside entities,” Gibney said.