La Puente had a noisy evening

Bridgetown DIY started the week off with overwhelming intensity. 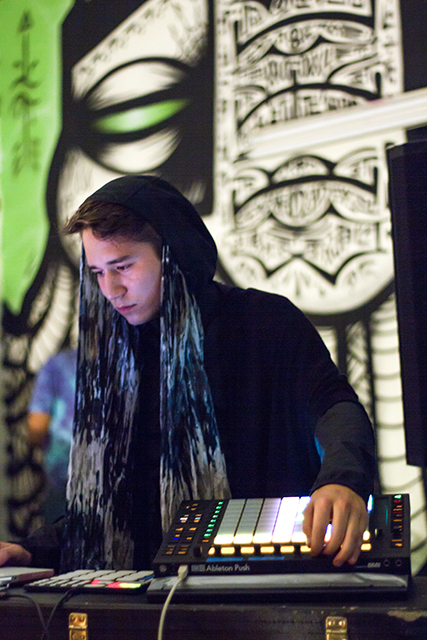 My Monday night started out normal enough. I went to class, chipped away at my mountain of homework and had my brain destroyed by anti-music at Bridgetown DIY. Drawing from all over the spectrum of electronic, dance, hip-hop, industrial, noise and even extreme metal, each band who played on Oct. 10 provided a unique aura for everyone in the room that night.

After an explosively emotional beginning, the audience caught their breath while S280F played a more minimalist set of trap beats, soundscapes and hypnotic samples. While not terribly interesting from a compositional perspective, his navigation of sampling and mixing boards kept his music interesting. The two subsequent acts plunged into total sensory overload.

Hailing from Austin, Texas, Street Sects set up synthesizers, trigger rigs, mixing boards, effects pedals and a formidable wall of giant speakers before turning on a fog machine. They kept pumping fog into the room until I could see no more than a foot in front of me. Without warning, several strobe lights broke through the murk, reducing my surroundings into a solid wall of pulsating light. Then the music started.

While I had difficulty distinguishing songs from their new album, “End Position,” Street Sects’ performance heightened the senseless abandon of their recorded material to impenetrable levels. With their audience in an appropriately claustrophobic environment, their vicious blend of punk rock, industrial noise and black metal tore through the fog like a knife. Implementing anything from darkwave to Death Grips-esque chaos, the disorienting assault took no prisoners.

The mysterious members of the band deliberately screamed in the face of anyone within close proximity to the band, which no one could realize until literally bumping into them. They even brought out a bladeless chainsaw, the sound of which inspired the first legitimately terrifying sensation I have ever felt at a show. Yet, towards the end of the set a certain calmness swept over me through the sonic battery. I felt a total loss of sanity, and with that came a cathartic tranquility that remains within me now.

Just when the dazed audience started recuperating, Arizona’s Fake Snake closed out the night with a monolithic dirge. The fog had dissipated by this point, but the duo’s monstrous combination of free-form noise and industrial rhythm might go down as the loudest thing I have ever heard. Watching the two sound manipulators erect draconian sonic horror begged the question of its place within artistic expression.

A hooded man screaming at the top of his lungs into a harmonica microphone over an avalanche of distortion might seem like the farthest thing from art, but I cannot deny the dreamlike state I fell into while witnessing it. The abusive nature of the night’s conclusion certainly differed from that of its more accessible beginning, but everyone left Bridgetown in a state of mind only reached by finding beauty in confrontational expression.