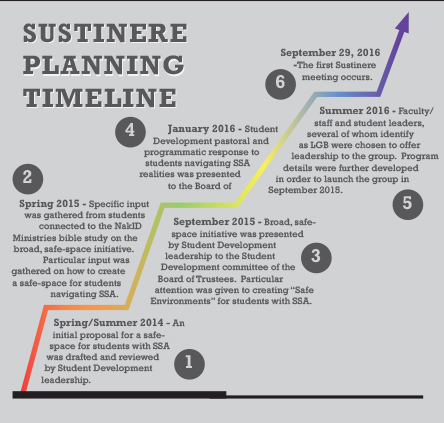 Although some groups have existed on campus to support students with same-sex attraction, Sustinere will be the first Biola-sponsored group.

The name comes from a Latin word meaning to “hold up, hold upright; furnish with means of support; bear, undergo, endure.” Matthew Hooper, associate dean of students, hopes to provide a better support system for the lesbian, gay and bisexual community on campus.

“The purpose of the group is to provide a safe space for students to share with one another and connect to build some community connections,” Hooper said. “We want to provide space for them where they can be known and express their experience while they’re here and be encouraged and be supported.”

In order to provide the community space, Student Development has worked for three years to plan and receive approval from administration. The process has involved the input of students and faculty as well as prominent authors on the topic, including Wesley Hill, author of “Washed and Waiting,” and Christopher Yuan, author of “Giving Voice to the Voiceless.” Hooper also conversed with students on “side A” and “side B” of the issue to understand the different needs as well as how the church can serve both sides.

“We’ve had multiple faculty and students, especially students who identify as lesbian, gay or bisexual, shaping this effort,” Hooper said. “And I think that’s created a lot of strength in the program and integrity for this program.”

Two faculty advisors guide the program, director of internship training Michele Willingham and assistant professor of New Testament and Early Christianity James Petitfils. Three student leaders conduct the weekly sessions and reach out to students who are interested in participating through one-on-one meetings.

Baylee Acosta, senior psychology major and one of the student leaders for the group, was previously involved in NakID Ministries. Acosta hopes to see LGB students find a place to share their stories on campus in a safe community, where they may not have found it before.

“What I’d love to see is a lot of new students I haven’t met yet show up and find students who might be feeling lonely or hidden and need a community,” Acosta said. “So I hope we’re able to find those students and give them a community and family and friends that they’re able to talk more freely about this experience they’re having.”

By the end of the academic year, Hooper hopes to reach 15 to 20 students in attendance for the weekly meetings. But even if those numbers are not reached, he believes it is a good thing for Biola to engage in the conversation.

“Even if it was less than that, I think this group, as a Biola-sponsored group, says we’re not shying away from these issues or these realities of our students. We’re leaning into them and we’re wanting to have conversations that are both supporting and challenging,” Hooper said.

This group does not reflect any change on Biola’s traditional view of marriage or same-sex relationships, but instead faces the realities of LGB students on a Christian campus and equips them to be leaders holding onto their own convictions, according to Hooper.

“Nothing’s changed about Biola’s view… we’re holding to our convictions there. But we’re also holding to our convictions regarding kindness and loving support and creating spaces for students to bear one another’s burdens,” Hooper said. “I see it more as bringing more of a holistic experience of grace and truth to our students, so they can be more successful while they’re here.”

After years of simply participating in the conversation, Acosta is glad to see the university taking actions to practice the methods they have been teaching.

“In the last few years, Biola has done a lot to engage in the conversation… I think more recently they’ve really starting to reach out to students themselves,” Acosta said. “I think this program is Biola stepping out, putting another step forward in trying to apply what they’ve been learning over the years of how to support students better.”

Students held different opinions regarding the new group, and whether or not the group is biblical. If the university should be supporting it remains up for debate among the student body as well.

“If students held it, that’s their thing. But now that the university is supporting it, I just feel like that’s not really the best thing,” said Danny Abraham, junior communication studies major. “I feel like as a university, as an institution, we are upholding to what the Bible says and everything, and it says that it’s wrong. And yet the fact that they support it, I’m not really too fond of.”

While some are concerned about the theology of the group, others like the idea of having a support system for the LGB community.

“I think it’s really good to have that kind of community where people can really talk about what they’re going through and not have to pretend everything is fine if it’s not, and they can be themselves… and that they can talk about it at a Christian university where the Bible can influence their thinking,” said Aspen Kling, freshman business major.