Flying past the Hawks and Warriors 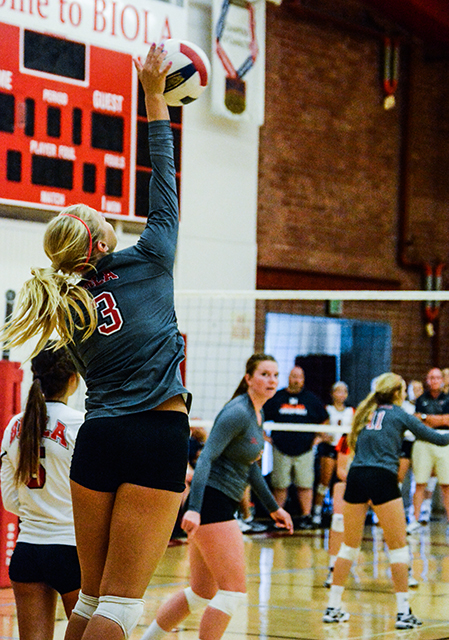 After two disappointing losses on the road last week, the Biola volleyball team bounced back in solid fashion, grabbing wins against the San Diego Christian College Hawks on Sept. 29 and the Vanguard University Lions on Oct. 4. Their record moves to 15-7 overall and 6-2 in Golden State Athletic Conference, putting them in a tie for second place in conference play with The Master’s University.

A straight set victory
The week started off with a slightly easier match for Biola, as they are 37-4 all-time against the Hawk. In fact, the last time SDCC took even a single set from the Eagles came in 2010. The story stayed much the same this time, as Biola pushed to a straight set victory.

The first set remained close all the way to 19-19, but Biola then won the next six points to take set one 25-19. San Diego controlled the vast majority of the second set, leading all the way up until 21-20. The Eagles then scored all five of the next points, winning 25-21 in set two. The final set had all the same characteristics, with Biola eventually winning 25-21 after the score differential stayed at two to three points for much of the set.

Two attackers for Biola had a fantastic night, with one name nearly expected by now and the other a relative newbie. Sophomore outside Hannah van Warmerdam finished with an excellent 16 kills and only five errors off 27 attempts for a .407 kill percentage.

However, even she could not match the numbers that freshman outside Alyx Dunham put up. Dunham finished with 18 kills and one error from 29 attack attempts, giving her an incredible .586 kill percentage. The freshman had only earned double-digit kills twice before in the season, and this performance put her second on the list of most kills for Biola this season.

Vanguard University came to Chase Gymnasium looking to upset the No. 16 ranked Eagles. After four sets of back-and-forth play, a victor had not been decided, so they went to a fifth set. The Warriors and Eagles traded points until 4-4, then a pair of kills from van Warmerdam, one from junior opposite Karly Dantuma and an attack error from Vanguard gave them the 8-4 lead as the teams changed sides per the rulebook.
A battle every night
Vanguard won four of the next five points to close the gap to one, and the teams went back to trading points. At 10-11 in Biola’s favor, they won two in a row to force Vanguard’s final timeout. The Warriors scored two then Biola got one to give them match point at 14-12. A duo of Vanguard kills tied it up, but Biola showed their mental toughness by winning the next two points, with the match-winning point being scored off an ace from junior libero Tess Van Grouw.

Three Eagles finished the match with 10 or more kills, including Dantuma, van Warmerdam and senior middle Olivia Sorensen, who had the best night with 10 kills on 17 attempts without an error for a .588 kill percentage.

“We lost last year at their place and we won here. I mean, it is going to be a battle every night,” said head coach Aaron Seltzer. “I sat down expecting a five-gamer and that is what we got. We are happy and they are not — that is the difference.”

The Eagles next play on Oct. 13 at 7 p.m., when they face the Montana Tech Diggers in the third of five consecutive home games for Biola.