Almost half the students in a recent survey remain undecided about who to vote for. 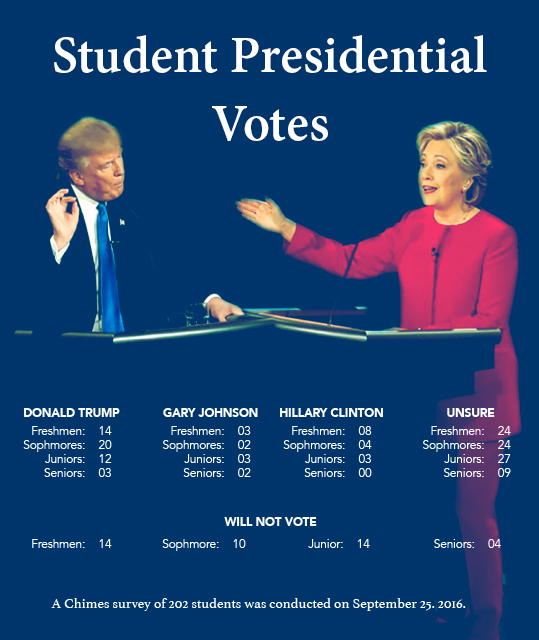 we have a responsibility to vote.
In a survey of 202 students, 41.6 percent voted unsure of who they would vote for in the November presidential election. About a quarter of the students, 24.3 percent, chose Donald Trump, while only 7.4 percent chose Hillary Clinton. Almost equal to that of Clinton, approximately 6 percent selected one of the independent parties. The remaining 20.8 percent said they would not vote.

“Of all people who ought to be informed it ought to be us because we are not to be people with our intellectual heads in the sand… Christianity purports itself to describe the world as it really is, and so of all people, we ought to be people who have our heads in the game and understand what the major issues are and the competing positions and think hard about these kinds of questions,” said Scott Waller, chair of the political science department.

With 41.6 percent of students unsure of who to vote for, chair of the communication studies department Joy Qualls stresses the importance of students informing themselves about the policies of each candidate. As students and Americans, according to Waller and Qualls, we have a responsibility to vote.

“We are responsible as individuals for how we address the issues, the candidates and one another… how we talk about things matters, and people are watching us, especially as believers,” Qualls said. “And so, if you are for a candidate, be for that candidate. But don’t degrade yourself and your speech by degrading the other candidate or those who are following them.”

Another reason voters feel unsure lies in the fact that the two predominant candidates in this presidential election are highly disliked by the general American public, according to Waller. Voters may also feel they must choose between the lesser of two evils.

“I think one of the challenges is we feel because we only have two choices, that sometimes we don’t have a choice,” Qualls said. “Because neither candidate speaks to our likes, our dislikes, our needs, our wants, greatest fears and our desires. And I think as a result of that, it does feel like these challenges are growing for us.”
Unsure on who to vote for
Despite students, and voters in general, being unsure of who to vote for, the presidential debate on Sept. 26 were a way to learn more about where the candidates stood. The Biola chapter of the American Enterprise Institute Executive Council had a showing of the presidential election debate by the fireplace pavilion with a great turnout.

“We had about 230 students watching the whole time and we had some trickling in and out, too. And that just gave me great hope and joy that students were engaged and involved, at the very least watching the presidential debate,” said Daniel Julien, senior political science major, chair of AEI.

While many students struggle with siding with either of the two main party candidates, approximately 6 percent opted for either Gary Johnson or Jill Stein. Although it may seem attractive to vote for the outsider, according to Qualls, she believes students should consider the weight of their vote in the long-term process.

“You have to ask yourself, in a two-party race, if third or fourth parties are taking eight, nine, 10 percent of the vote away from the two candidates, are you really willing to take the risk over who may happen to get elected?” Qualls said. “Because at the place where we presently are, third parties don’t garner enough support to win the White House, they simply garner the report to draw votes away from the two major party candidates.”

Although students may choose to vote for independent parties, a number of evangelicals have declared their support for Trump, including those surveyed on campus of whom 24.3 percent said they would vote for him.

“The Republican Party, compared to the Democratic Party, espouses more conservative principles that Christians associate with their faith. I think that the support for Trump, for the Republican establishment, comes from this deep-rooted connection between evangelical thought and conservative or Republican ideology,” Julien said.

As students decide who to vote for, whether the independent candidates, Trump or Clinton, the important part remains to actually vote.