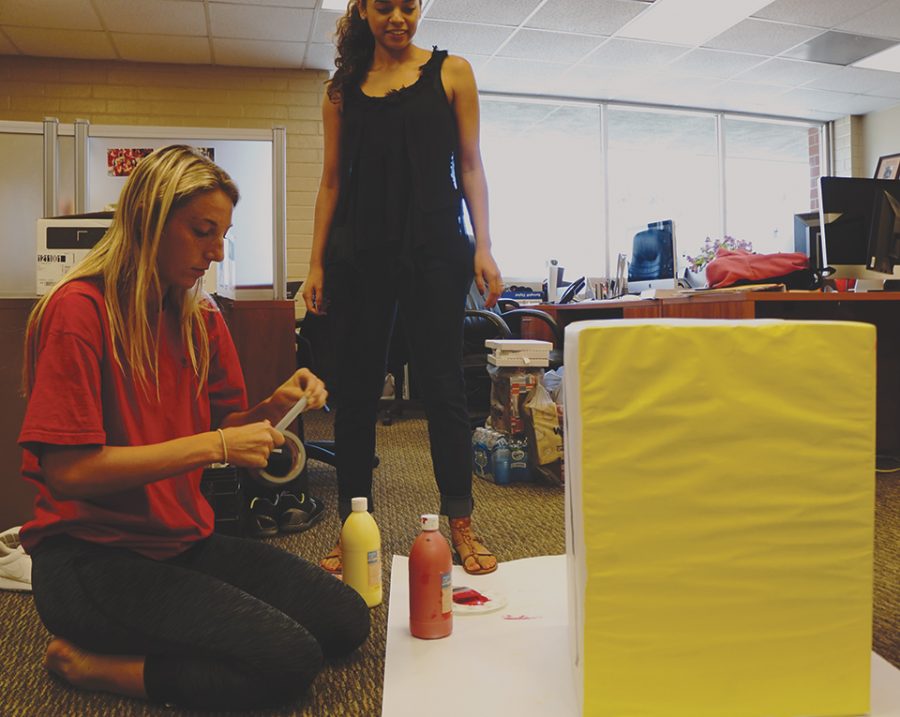 The students exuberantly cheer as different teams compete and the intensity rises. School spirit fills the air. The students bond together to encourage their teams. At the end, everyone races to the middle and begins to dance to their favorite songs with their favorite people. This tradition is one of senior human biology major Taylor Venegas’ favorites at Biola.

Nationball brings the Biola community together

Before all the amusement of Nationball commences, intramural coordinators Venegas and senior nursing and psychology major Melissa Suarez must undertake immense amounts of planning and scheduling. They began planning the event spring semester and continued planning through the summer.

“We had to think about all of the basics,” Venegas said. “It’s actually a lot more stuff than you would imagine.”

Nationball brings the Biola community together for fun and competition every year with a boisterous dodgeball game. Finding referees, an emcee, a DJ, events during the game and a person to play the Biola Eagle encompass just a few of the tasks that it takes to produce Nationball, according to Venegas.

When Suarez and Venegas came back to school a week early for the fall semester, they concentrated completely on organizing each minute element of the games.

“I am super grateful that we get to take this opportunity on,” Venegas said. “[Planning the event] has been a lot in a short amount of time.”

Just this week, the two girls chose the referees for the games. They selected around 12 people, some of which have previously fulfilled referee roles at intramural games and previous annual Nationball tournaments. No application process was necessary as Venegas explained they picked referees they trusted and knew would handle the pressure well.

One of the referees, senior business analytics major True Tamplin, explained the most difficult pressure as a referee comes from your friends. Referees have little trouble enforcing the rules of the game for someone they have never met before, but enforcing the rules for a friend proves tremendously more difficult, according to Tamplin.
Making firm official calls
“I just plan on making firm official calls,” Tamplin said.

The coordinators look at what previous coordinators produced, and bring new ideas of their own into the event. Venegas presented the idea of bringing faculty into the games. Coordinators invited faculty to play a five-minute example dodgeball game against the athletics department to explain the rules and show what friendly competition looks like.

“I think this is a good way to let them enjoy this Biola tradition, and just let students see that these people that they look up to are actual humans,” Venegas explained. “It helps the faculty get involved.”

The faculty game will last only five minutes because most of the faculty do not wish to stay late, according to Venegas. However, the Nationball staff welcome them to stay for the entire tournament, if they desire.

Venegas hopes to post team brackets on one of the walls inside the gym as another addition to this year’s game. The brackets allow the students to visualize which team comes next in the game. They plan to roll dice at the beginning of the night to pick the teams that will play first, reusing a method from three years ago.

Intramural coordinators get to choose one major student activity to undertake during the year. Venegas smiled, causing her freckled nose to wrinkle as she revealed she picked Nationball because it carries some of her most cherished memories from her time at Biola and cultivates friendships within each dorm.
A very welcoming environment
“I was in Hope my freshman year, and that was one of my favorite experiences,” Venegas said. “I love going all out.”

“Without the organization, it would just be chaotic chaos, which is just purposeless, meaningless and not as fun,” Tamplin said.

Tamplin revealed he appreciates that Nationball allows people to enjoy a wondrous time without alcohol or drugs. The games seem like a safe place where people show their personalities without their insecurities.

“Being able to see the whole school in the gym is really fun. It’s a very welcoming environment,” Venegas said.