Biola men’s soccer starts the 2016 home season with a pair of wins versus University of Great Falls and Rocky Mountain College. 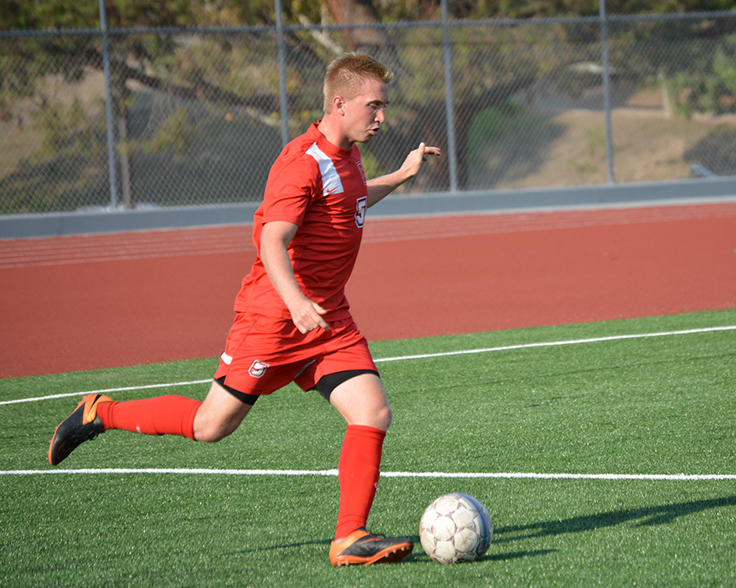 The new Al Barbour field is officially broken in for the 2016 Biola men’s soccer season. The Eagles played two matches this past week, winning against both the University of Great Falls and Rocky Mountain College. These wins push the Eagles to a season record of 2-1, after falling in an away match to Marymount College.

The first game this week against the Great Falls Argos ended up as the most exciting match of the season so far, as it required almost 100 minutes to decide a winner. The game started out at a quick pace for Biola, as they had taken five shots before the first 20 minutes passed. The highest quality opportunity came in the 18th minute, when senior forward Leonardo Contreras took a shot that bounced off the post before a missed header shot from junior midfielder True Tamplin ended the Biola attack.

Biola’s junior goalkeeper Igor Puglia had a relatively easy day in the net, as the Great Falls attackers proved unable to put a single shot on target. On the flipside, Biola’s offense took 18 total shots, five of which were on goal. However, none of the shots found their target in regulation, and the score read 0-0 going into overtime.

UGF took a shot three minutes into overtime, but it went wide, giving Biola possession. They advanced the ball down the field, until an absolutely beautiful cross from junior midfielder Yuri Cruz found senior midfielder Thomas Samayoa’s feet, who then beat his man and the keeper to kick the ball home in the 100th minute and give Biola their first overtime win since Aug. 27, 2013.
Rocky Mountain College crumbles
Game two of the week put Biola against the Rocky Mountain Battlin’ Bears. This game ended in a 2-0 score in Biola’s favor, but was far from easy for the Eagles. RMC and Biola traded shots in the first half, with nothing to show for it in terms of the score.

The second half started in much the same way, as both teams had opportunities to score but came up empty. That changed in the 58th minute, as Contreras scored his first goal of the season by taking advantage of a poor pass from the Bears’ keeper and shooting it into the back of the net.

Five minutes later, an RMC player earned his second yellow card of the game, sending him off the field and giving Biola a man-up advantage. 10 minutes after that, junior midfielder Jarrett Pugh earned his first goal of the season after a shot from Contreras deflected off the goalkeeper right to Pugh. The two goal advantage turned out enough to beat Rocky Mountain, as the Bears lost a second player with a red card and could not get enough offense to score.

“We are not taking these non-conference games lightly because we know that they are playing a vital part in our preparation for conference competition,” Pugh said. “Being GSAC champs last year does not guarantee us anything except maybe that the fact that we have a target on our backs, which makes us need to be even more prepared for each opponent.”

Biola next plays on Sept. 8, as they face the Cal State San Marcos Cougars in an away match at 4 p.m.