Colin Kaepernick stands for victims of police brutality by sitting down during recitation of the national anthem. 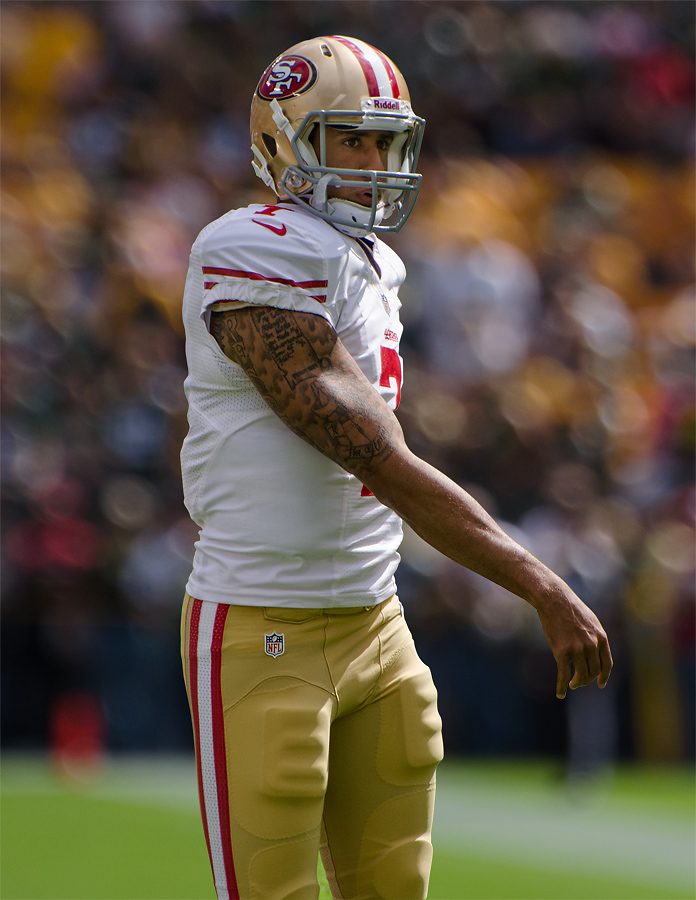 Fans booing him by the thousands, an entire team standing in line for the national anthem as an obvious backhand compliment, and a possible boycott of police forces and security at his home stadium. These events all spur from a simple protest of police brutality by San Francisco 49ers quarterback Colin Kaepernick: sitting down during the national anthem.

Media wrongfully attacks Kaepernick
Are these acts of retaliation unnecessary? Yes. Should people expect any less of a reaction? No, because people like Kaepernick have faced protest opposition in the past, long before his ordeal even became an idea.

Colin Kaepernick has undergone attack after attack by the media, from fans and teams alike. The media went up in arms after his first act of protest on Aug. 14 during a preseason game, when he sat during the national anthem before the game. Kaepernick stated to NFL media that this protest is against police brutality.

Many look upon his act of defiance as illegitimate because he is “not black,” as Kaepernick is biracial and comes from a whitefamily who adopted him. A huge argument against him is that people died for his right to stand. He is seen as disrespectful and insolent.

It seems that people are forgetting this was a premeditated act by Kaepernick on a national stage, during one of the arguably most patriotic moments in sports. No one in their right mind decides to sit down during the national anthem without a serious cause.
Act of flexing first amendment rights
This grave travesty in the eyes of football fans, which is actually an act of flexing his first amendment rights, is being blown out of proportion. The New York Giants apparently found it fitting to send a message to Kaepernick, days after he first sat during the national anthem. Sports stars who are not even closely related to Kaepernick or football commented on this act. Multiple Nascar drivers took to Twitter to react to his feat. John Isner, America’s highest ranked men’s tennis player, called Kaepernick pathetic.

This is nothing new. Many black athletes in the past have stood up for racial rights and expressed their dissatisfaction in similar fashions. They were also met with similar reactions.

Athletes like Tommie Smith and John Carlos, track and field athletes who performed the black power symbol at the 1968 Summer Olympics during a medal ceremony, received similar backlash. To make a point, Jackie Robinson was relentlessly ridiculed, attacked and segregated by white America in his fight to break the color barrier in professional baseball.

It is frustrating to watch America react so negatively to a racially sensitive issue. America does not know how to react to such a nationally-pressing issue, so the first reaction is hate. Veterans fought for this freedom to protest. People need to remember that freedom needs to be protected. Is it unfortunate because although many think Kaepernick is threatening the sanctity of freedom in America with such a small act, he is trying to protect the freedom of those who are oppressed in this country because of police brutality.