With many returning key players, women's soccer looks to build off a 2015 season where they exceeded expectations. 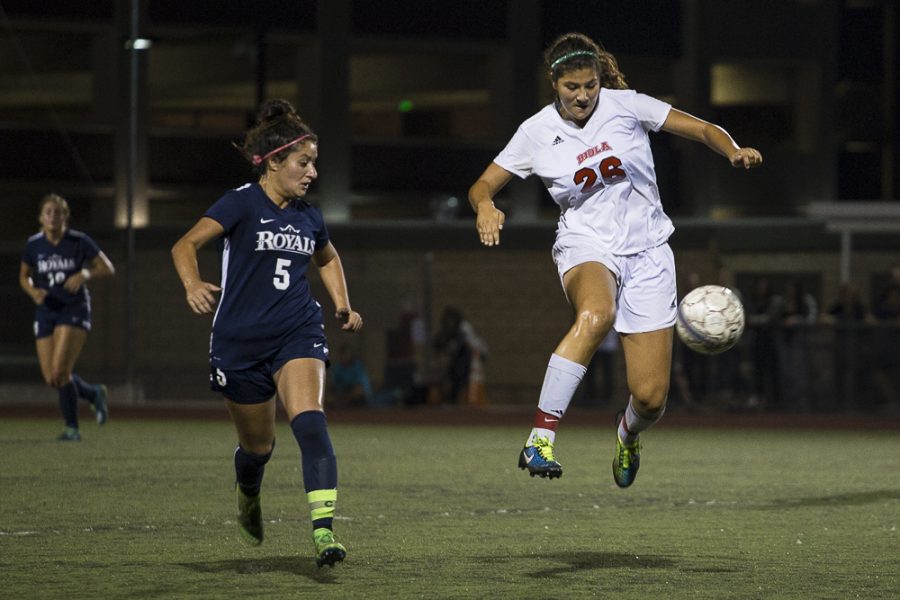 With many returning key players, women's soccer looks to build off a 2015 season where they exceeded expectations.  |  Matthew Maitz/THE CHIMES

The Eagles’ 2015 season ended in Alabama after a second round loss in the NAIA National Championships. However, there was never a sense of gloom as last year was a huge success in head coach Erin Brunelle’s inaugural season.

The bar has now been set, players have scratched the ceilings of their potential and returners are in abundance for Brunelle’s squad.

“We expect to compete to win every game we play, we desire to qualify for the GSAC tournament and National Tournament every year,” said Brunelle. “We definitely overachieved in the 2015 season, so it will be a tall task to replicate and the returning group believes that they can qualify for Nationals again.”

Last year tested Biola's team, but they will try to use their hardships to their advantage when adversity arises in 2016.

“We were able to experience both victory and defeat last year and that is what will keep us motivated, and winning 1-0 to Eastern Oregon in the snow is an experience none of us will forget, but nor will losing 0-3 to Westmont in the GSAC tournament championship game at home,” said next year’s senior captain and forward Taylor Venegas.

Entering her last season as an Eagle, Venegas will don the senior captain status. The speedy scorer is high on many Biola all-time-record lists. Last season, Venegas finished with nine goals on an astonishing 73 shots attempted, placing her fifth in Biola history for most shots attempted, with 148 in her career. Venegas has a chance to supplant the No.1 spot held by former star Eagle Rianne Schorel. If Venegas can have a season remotely close to last year’s she will easily surpass the record of 201 shots taken.

2015 saw the rise of a freshman phenom in defender Maddy Brown. The energetic and imposing defender logged in the second-most minutes on the team behind fellow defender and sophomore Cat Newberry. Brown is also on the ropes to improve upon a season that saw her garnish a spot on the NAIA First Team All-American list as well as winning GSAC New-Comer of the year.

Last season, Brown and Newberry helped build a suffocating defensive identity for the Eagles, significantly contributing to the Eagles’ ultra-impressive plus 20 goal differential.

The Eagles had a solid offense in 2015 but changes will be made on offense to capitalize on the strengths of Venegas, sophomore Samantha Verdusco and junior Jessie Burns.

“This spring, we have tried to implement a different formation so we could have more numbers in the box for crosses and building plays up and ultimately scoring more goals,” Venegas said. “So far it has been an interesting transition because the midfield has to communicate a lot more and figure out how to defend together but it demands players like Mariah Ziemer and Sam Verduzco to take the ball down the line and get good crosses in which actually allows them to really be in their element.”

Speaking of junior midfielder Mariah Ziemer, look for her to take on a larger role, especially out on the wing where she will see more offensive opportunities now that senior Brittney Sayre will be moving on.

Freshman goalie Seaira Moore will be counted on to help fill the void left by senior goalies Amanda Johnson and Marina Rodriguez.

The Eagles know it will be difficult to replace the veteran prowess Sayre, defender Amanda Otto, Johnson and Rodriguez possessed. However, Brunelle believes they do not have to replace them. Instead they must capitalize on the strengths of their current and incoming players.

“We focus on developing each player to have the confidence to make the most of any opportunity they are given,” Brunelle said.

The goal is to win the GSAC title in the Eagles’ last season in the NAIA and go even farther in Nationals. The Eagles did surprise many with their 15-4-3 overall record. However, it is blatant the Eagles are a juggernaut in the NAIA and expectations will be high in an upcoming season that should bring many memories and fireworks.