The punk-rap lunatics push the envelope while providing just enough room to breathe. 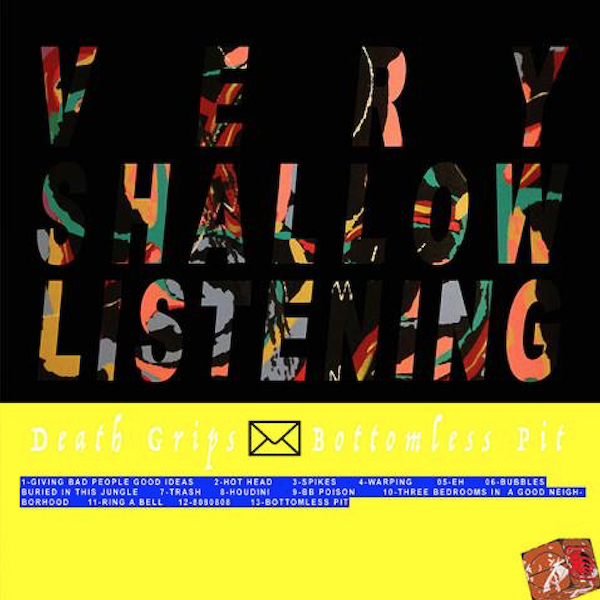 Anyone with even a passing interest in Death Grips will affirm the Sacramento-based experimental hip-hop trio sees boundaries as something made for crossing. The juggernaut of MC Ride’s maniacal rapping and the frantically bombastic production of drummer Zach Hill and keyboardist Andy Morin rampages through decadent corridors of industrial, noise and punk rock. “Bottomless Pit” continues the journey of audible terror Death Grips have been on since their inception.

psychedelic powerviolence
This album boasts sounds unlike anything explored in Death Grips’ previous albums — or any hip-hop record. “Giving Bad People Good Ideas” opens with psychedelic powerviolence thrown into a blender with MC Ride’s ravings. Impenetrable barrages of guitar noise and misshapen riffs drop without warning into didgeridoo-esque samples and a sing-along vocal reprise, with Hill’s continuous blast beat wrapping the track together with barbed wire. Death Grips certainly has no problem with swan diving into new dimensions of insanity right off the bat.

Although powerviolence plays an obvious role in two other tracks on “Bottomless Pit,” Death Grips never let up their harrowing assault. “Hot Head” injects bone-grinding rhythm into the chaos introduced before, allowing futuristic synth lines to shine without losing any feral rage. The title track closes the outing with similar destructive energy. These unabashed forays into the most abusive realms of punk rock do not dominate “Bottomless Pit,” but are surprisingly compelling complements to the inherent savagery in Death Grips’ sound.
A diverse array
The rest of the album remains closer to the confines of expectation, but one should always expect the unexpected from Death Grips. A diverse array of arrangements from ethereal explorations to hellish punk-rap demands the listener’s attention from start to finish. Every track on “Bottomless Pit” adds a unique flavor to the overall experience, lending a sense of cohesion to an otherwise schizophrenic emotional vibe.

In spite of its gleeful ferociousness, this is some of Death Grips’ more palatable music. “Bottomless Pit” certainly doles out surpassing punishment, as “Bubbles Buried in This Jungle” and “Three Bedrooms in a Good Neighborhood” exemplify. However, a consistent level of underlying accessibility presents itself throughout the 40-minute runtime. This traces back to the stellar production and musicality within cacophonic backdrops, courtesy of Hill and Morin.

“Warping” and “Ring a Bell” have lurching aggression in spades while “Houdini” and “80808” warp minds with spaced out synth drones, neither of these extremes digressing into nonsense. The beats are responsible for this balance. Their visceral earthiness and out-of-this-world nuances send them ricocheting into the nether regions of industrial hip-hop. What makes “Bottomless Pit” so compelling is its conviction to give listeners something to grasp while driving them into the fetal position in the corners of their mind.
frenzied lyrics
MC Ride makes wonderful use of his musical environment, contributing his signature off-kilter verbiage with ease. His frenzied lyrics maintain cryptic pessimism, and his delivery could be likened to the nihilistic ravings of a psychopath. While “Hot Head” features his meme-ready nonlinear explosions, “Warping” features lines switching between hypnotic and gut-wrenching effects. The ironically named “Trash” features one of many examples of his acrobatic lyrical and vocal chops, which manifest throughout the album.

“Bottomless Pit” provides courageous levels of exploration from a band obsessed with upping the ante. Fans and curious listeners will find Death Grips as unpredictably confrontational as ever, dancing as hard as they can to a new creative bench-mark.