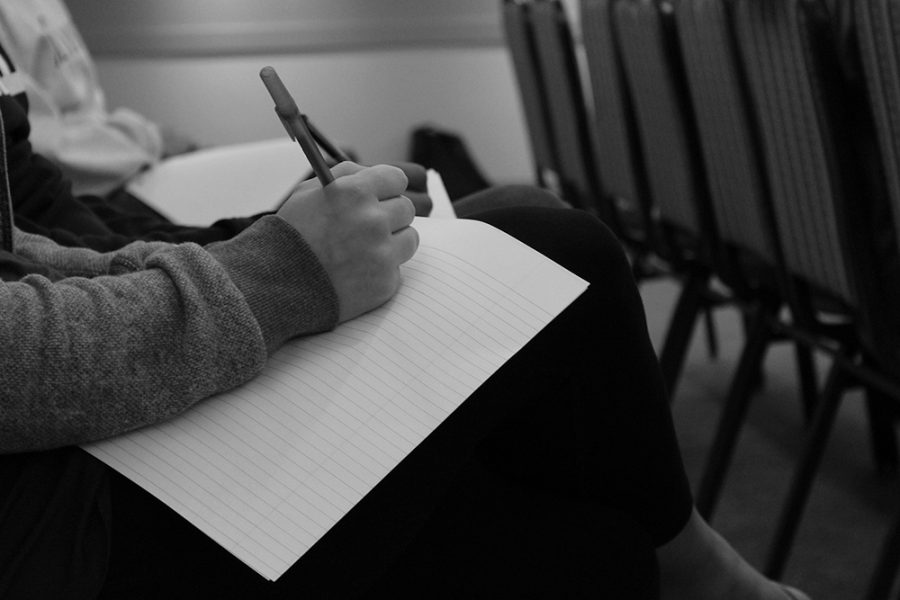 Danielle Bennett, high school teacher from Inglewood and now spoken word warrior, opened a window at Biola through expression and the understanding of trauma in her poetry workshop on Tuesday,  Apr. 25.

Sexual assault awareness begins with understanding the basics of consent and sex itself. Bennett strives to make those idyllic concepts known to people she works with before they can begin to explain what they believe has happened to them.

The workshop focused on Bennett’s five rules of how to write a good poem. Good poems grounded themselves in original thought, original language, detailed description, thorough editing and honesty, according to Bennett. Bennett focused primarily on how cliches can damage good poetry more than anything else. She first introduced a concept called “freshening the line,” where students were invited to think about the true meaning behind well-worn phrases and create their own original thought.

“Even though [poetry] was secretly sustaining me, there’s times where I had so much to wrestle with, and poetry was the place where I could come back and see my own faults and see my heart in front of me, and make some sense of it,” Bennett said. “It’s so nice to be able to speak about my faith openly, and I can’t do that in all my workshops, and all of my shows, but to be unashamedly and unabashedly very open.”

Bennett visited campus in January for the Turn Your Campus event at Biola to encourage young people to share the gospel boldly to their friends. She also most recently spoke at SCORR conference, running a poetry lounge which encouraged students who felt discriminated and hurt to express themselves through poetry.

Hayley Darien, senior elementary education major and president of Brave Voices, also had a primary role in scheduling events for Biola’s spring 2016 awareness week. She specifically recommended this poetry workshop to the planning board in Student Development, and was instrumental in managing and leading the introduction of the meeting.

“[Bennett] works professionally with helping people express themselves through poetry. She’s a survivor herself and she believes that poetry is really useful and beneficial for expressing and processing really painful things that you keep inside of you,” Darien said.
Thorough Knowledge

Laura Igram, director of Student Programming, formed the Sexual Violence Prevention week task force in October 2015. Her goal focused primarily on education, informing the student body on the language used in sexual crimes and how to approach the problem with thorough knowledge.

“Sexual violence is not about sex. It’s about power and control. So people who have power sometimes wield that over people who have less power, and often that is men over women,” Igram said. “Now, we know that one in 16 men are sexually assaulted in their college years, so it’s not just men to women.”

While the workshop specifically invited survivors and those suffering from trauma to be taught on how to express their pain and memories, friends and families were also encouraged to come in support. Helping a sexual assault survivor begins with understanding the nature of the trauma, and how it affects the Christian psyche.

“We’re really wanting students to get what consent is,” Igram said. “We don’t talk about consent [in Christian culture] because we expect students to not be consenting in sexual relationships. But we know what happens. So it’s everything from educating faculty and staff on the fact that students are having sex, we know that. And how to help potential survivors and victims.”