Student’s and ancestors eagerly await this day, and for good reason. 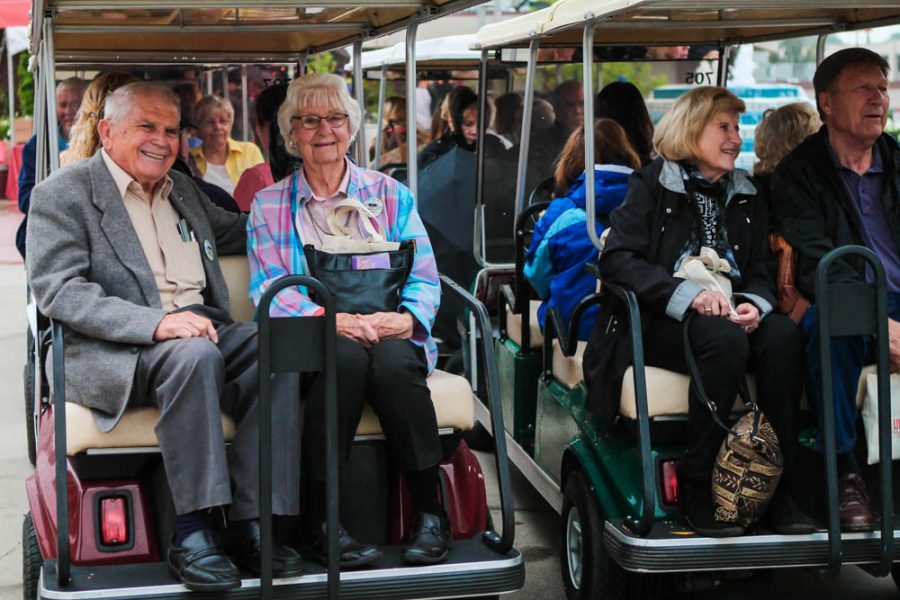 Riding through campus on golf carts, grandparents from far and wide joined the Biola community for this year’s Grandparent’s Day.

The day began with registration at Fluor Fountain of Faith, where grandparents had the opportunity to buy an official “Biola University Grandparent” t-shirt, and received bags with the day’s schedule.

Chelsea Royse, manager in Parent Relations, helped sign in grandparents and handed out bags of goodies, including Chex Mix and official memorable pins. Her first exposure to Grandparent’s Day felt exciting, as she revealed the anticipated number of participants to be nearly 500 including students.

“This event is a much anticipated event throughout the year, it’s one of our biggest events that we do,” Royse said. “They’re just really excited to be on campus. They like to see where their students are and a lot of them are really involved in their student’s life.”

Bring Your Family
From there students were encouraged to bring their families to chapel where Todd Pickett, dean of spiritual formation, spoke on the burden of a misunderstood Christian life. Pickett spoke in chapel on the prodigal son story of Luke 15, where the five surprises Jesus offered in the story reflect how our gracious father bestows mercy on us in surprising ways.

After chapel, grandparents gathered at Fluor Fountain for golf cart tours around campus. Major stops along the tour included the Jesus Saves parking structure and the new site for the Alton and Lydia Lim Center for Science, Technology, and Health, set to be finished the spring of 2018.

Emily Castro, freshman public relations major, brought all four of her grandparents to the festivities. Emily, Lynn and Tom West, and Dan and Pat Castro waited in the line for golf cart tours while chatting about chapel and the beauty of the campus.

“The campus is totally impressive, I’ve never been to it before and I was bulled over by the architecture and the buildings,” Pat said. “You have such beautiful surroundings, the centerpiece for your fountain, the architecture from the older to the newer, it’s just beautiful.”

Keeping Up with Each Other

Tom and Lynn agreed the campus’ beauty was one of the best features of visiting. They also stressed that the key reason for visiting their granddaughter was to make sure she was keeping up with her work until the semester finishes off.

During the midday luncheon, President Barry Corey gave a message on the legacy Biola parents and grandparents leave, followed with a seminar by Chris Grace, professor of psychology and director of the Center for Marriage and Relationships. Royse emphasized that both sessions stood as an attempt for grandparents to live a day in the life of any Biola student.

The morning lawn games were cancelled due to the slight downpour, but the luncheon and all of Biola’s many roofed infrastructures provided much needed coverage. Even though the day yielded showers, families enjoying the community enjoying the campus were sunny and bright.