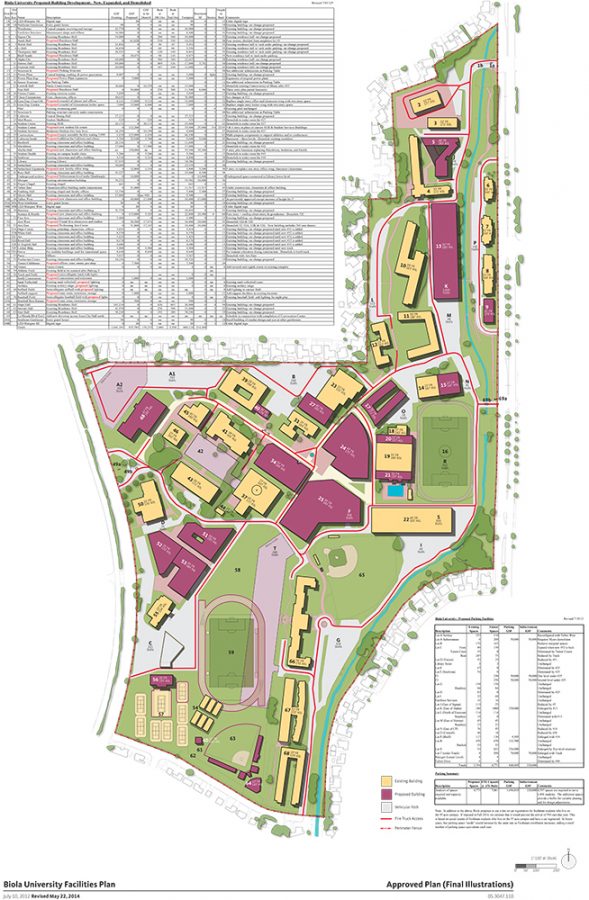 Freshman music performance major Trevor Johnson spends approximately 14 hours a week practicing trumpet. Though he uses the practice rooms in Crowell Hall, he often finds them already full. He takes his instrument, music and music stand down the stairs to the parking lot below the soccer field.

“Usually I’m stuck going outside and practicing in the parking garage…because everything is taken,” Johnson said.
The great expansion
Crowell Hall was built in 1963 and was originally intended for a few dozen students. The music conservatory now has approximately 170 majors, 20 minors and other students in bands or ensembles. The great expansion of the program has caused strain on the building, even with the annex addition, the Music in Worship building and some offices being located next to the Biola Print Shop.

George Boespflug, director of the Conservatory of Music, explained the acoustical environment of Crowell Hall also poses a challenge for students. Practice rooms are often all in use and this can produce an atmosphere not conducive to proper practicing.

“If you walk up and down the halls of the music building you’ll hear instruments and it’s kind of a pleasant cacophony of sounds but it’s actually very distracting if you’re in a practice room,” Boespflug said.
LITTLE STORAGE
The building also has little storage space for students’ instruments or props from shows. Classrooms are booked from 7 a.m. to 10 p.m. daily, and students often struggle to find a place to put their notebooks and take notes in rooms with keyboards.

During opera performances, such as this year’s performance of “The Magic Flute,” classrooms are closed and instead become the backstage and dressing areas. With props lining the halls this not only creates a potential fire hazard but also a tripping hazard for students walking through the area. The stage itself was also not intended to host more than a single or small group of performers. Facilities added a stage extension in 1997, modifying it in 1999, in attempt to remedy the issue but it remains unsuitable for any large scale performances.

Though there are a variety of problems faced in the music building, conservatory faculty admit the importance of the university’s decision to go ahead with a science building instead of a new arts building.

“I think at the time, the university was looking at, ‘Where is employment going to be in the future?’ and the [answer was] sciences and [Science, Technology, Engineering and Mathematics education] and I think they were exactly right,” Boespflug said.
THE MASTER PLAN
Planning for the Alton and Lydia Lim Center for Science, Technology and Health began in 2010, though there were a few pauses during the planning processes. This is one of the buildings on the master plan, the most recent edition of which was approved in December 2012.

“So we have a great menu of future buildings that would meet a lot of needs on this campus so depending on what the priority is we can pull a building off this plan and decide to build it next,” said Brian Phillips, director of facilities management.

One building on the master plan would be called Arts East, located in the middle school area, which would be for the music department.

“That does include a performing arts theatre, a black box theatre, all the music practice rooms and corale room, symphonic winds rooms, band room, that kind of thing,” Phillips said. “Potentially we tear down Crowell and we build a dorm.”

For now, facilities has considered including an addition to Crowell for more storage space, but while plans are established, there is currently not enough funding to complete the project.