A chapel and luncheon were held for four women presented at Biola’s Ruby Awards. 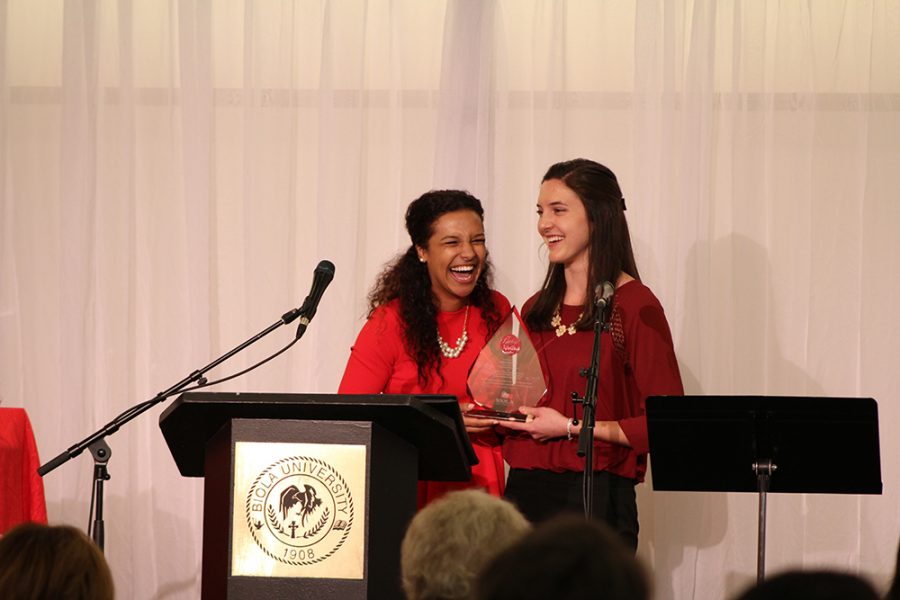 Four women were awarded by their colleagues and peers at the ninth annual Ruby Awards at Biola on Friday, March 18 with a special chapel and luncheon held that day to celebrate March as Women’s History Month.

To be awarded, the women must be nominated by students, peers and colleagues. The luncheon was attended by approximately 130 people.

Awarded the Priscilla award for teaching and mentoring, Vukovich graduated in December 2015 with a bachelors of science in business administration and an accounting concentration. She credits her award to the mentors who helped build her into the woman she is today.

Carrie has worked at Biola for 14 years and received the Deborah award for wisdom and leadership. For her, having God near in her life allowed her to do things that she was originally nervous to.

“I do think that what I said in the beginning, just knowing that God is near is so reassuring in life and it allows us to do things that we never expect. I think that’s what’s so exciting about the journey of life,” Carrie said.

Her mother, Claire Stockton, was with Carrie at the luncheon and offered advice, saying the only way to have an adventure was to have courage.

Barco, recipient of the the Esther award for obedience and servanthood, has worked for three years in the financial aid department and seven years in admissions. She felt honored her colleagues would see her as a role model of the biblical character, Esther.

“You feel really honored that you’re being considered for [the award] especially because you’re nominated by other staff or other people in that committee so you feel very honored that people would think of you that way and look at you that way,” Barco said.

Susan was bestowed the Anna Horton award for lifetime commitment and service. She served as a nurse in the American Red Cross for both the attacks n Sept. 11 and Hurricane Katrina relief and set up the Hoffman Award with her husband, Donald Hoffman, in 1976 for non-faculty staff members at Biola for their outstanding service.

“These awards, this theme for the awards this year was courage and I would say a lot of people thought I had a lot of courage going to all the countries and disasters I went to and to me it wasn’t a matter of courage it was a matter of following the Lord’s calling, going where he wanted me to go,” Susan said.