New requirements for Biola apartments alter the processes of applying for living spaces. 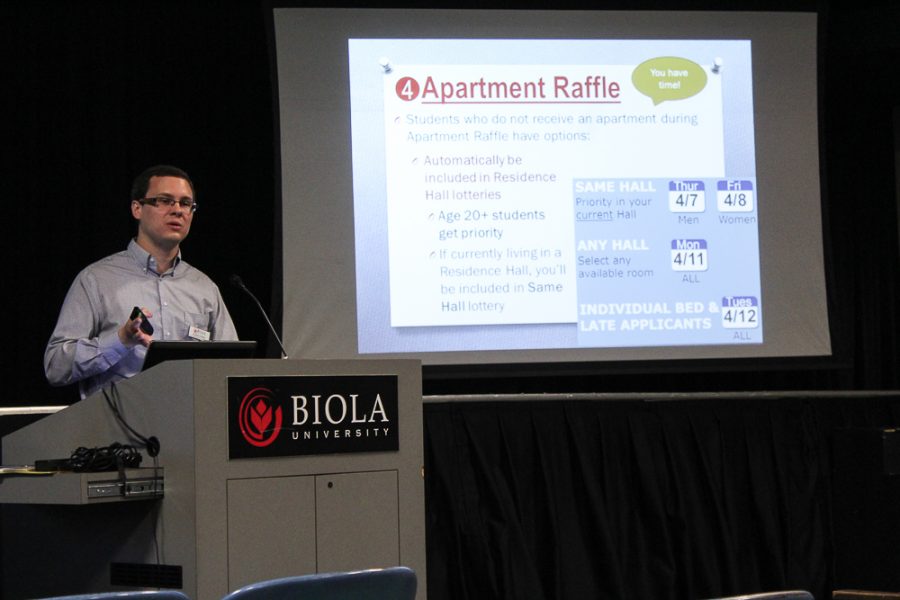 A new age has dawned in Biola housing: apartment selection now gives priority to seniors.
Altering Eligibility
After collecting student feedback from three rounds of surveys, housing services decided to alter the eligibility, priority and process for students to apply to live in the Biola apartments. This specifically includes lowering the age requirement, giving priority to seniors and creating more time between apartment selection and resident hall selection.

“We want to keep listening, always. Every year we change something to the housing selection process based off the feedback, if it’s the majority feedback, or something that we can do without someone else losing something, we do it,” said Heidi Herchelroath, manager of housing services.
Age Requirements
For the past two years, it has been required that students are 20-years-old by the first day of fall classes to be eligible for housing in the Biola apartments. This age requirement was chosen because the average age of a Biola junior is 20-years-old. In the past, the age requirement was 21-years-old but exceptions were made for juniors. Students can still apply for exemptions if their birthday is close to Aug. 24, 2016, the first day of fall classes.

“I think that’s a little bit more difficult, they should honestly be flexible because if someone does apply for the apartments and there’s one or two of them [that] are seniors and two of them are juniors, I feel like they should be fine in getting an apartment if they’re not 20,” said Lorielle Lee, junior communications studies major. “They probably have a vision to see past that that I don’t have right now.”
Priority
In addition, students will be given priority if they are senior, which means they have 88 or more credits in progress by spring 2016. This differs from previous years in which students were chosen at random for their selection times. Since the apartments can have groups of two, three or four roommates, groups will have a higher level of priority if more of their members are seniors in standing that currently live in Biola housing, rather than groups with a mix of seniors and juniors.

“I feel like if you have been living in on-campus housing for three of your years [at Biola], you should have more than just a random chance of getting into the apartments your last year. If you pay your dues, I think you should be given an advantage,” Sarabeth Mullins, junior music composition major.
Raffle
There will then be a raffle in which the students determined to have the highest level of seniority will be chosen and told they have a space secured in the apartments. They will be notified of this on March 21 at noon. The next day, they will have the opportunity to go to their MyHousing pages during their assigned lottery time to choose the specific room they wish to stay in.

Previously, apartment selection times were given at random and students would find out if any rooms were available and would have to choose a location quickly. Mullins explained she was unsuccessful when she tried to sign up for one of the apartments last year.

“I was getting texts from various friends with lottery times before me saying like, ‘There are only three apartments left’ or live updates. My lottery time was 15 minutes after the last apartment filled up,” Mullins said. “It was really kind of stressful figuring out what to do because the same hall lotteries came so quickly afterwards.”
Earlier Selection
The last change makes the apartment selection process earlier in this spring semester, with students receiving a confirmation email on March 22 and selection occurring on March 23, and is completed two weeks prior to residence hall selection which takes place April 7 to 12. This gives students time to explore options off-campus or in the residence halls. Separating the two rounds of housing selections allows students unable to get into the apartments time to create another plan for their living arrangements.

The changes made to the apartment selection process differs from the rules for the residence hall rules and process, which will be explained in meetings in Sutherland Auditorium on March 3 at 6 p.m. and March 4 at 9:30 a.m.