The swim team demonstrates a high level of success at the Pacific Collegiate Swim and Dive Conference Championships. 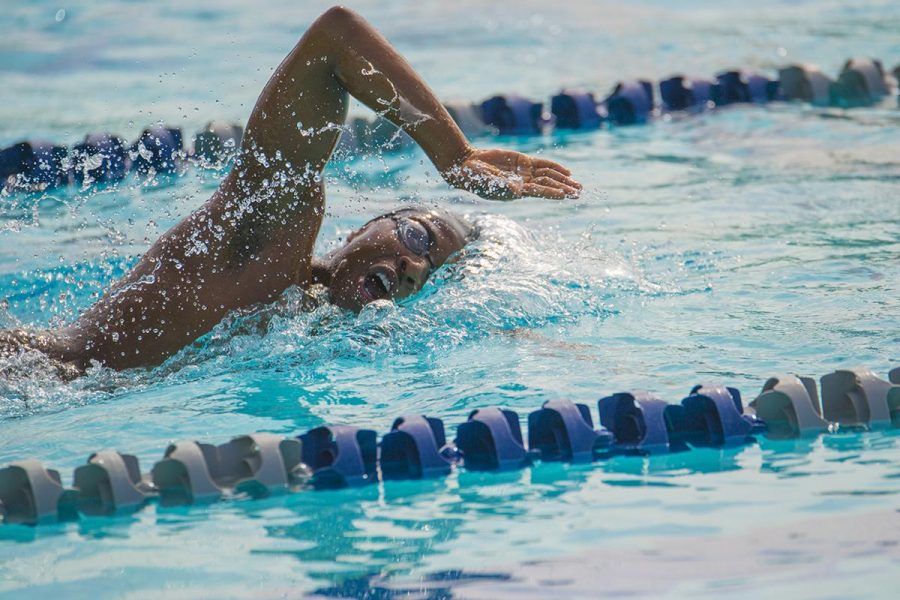 The swim team faced their toughest competition of the season during the Pacific Collegiate Swim and Dive Conference Championships this past weekend. The event lasted four days from Feb. 12-15 and included both prelims and finals events. Ten women’s and six men’s teams from both NAIA and NCAA Division II competed, creating a high level of competition for Biola.

Sophomore Lisa Tixier enjoyed seeing her teammates earn national cuts, one right after the other, and the ways the whole team continually encouraged each other during events.

“The way the whole team comes and backs around everyone’s lane to cheer for them, it’s just so much fun,” Tixier said.

Senior Angela Kirschner said her favorite part of the meet was senior recognition night where all the seniors from each team in the conference receive recognition. She enjoyed each of her four years as a Biola swimmer and said she will miss the team and sport.

“Each of the four years has been so different with the team, but it’s not something I would ever change,” Kirschner said.

The team swam well overall, secured strong finishes and recorded faster times as the weekend progressed. Although the team had a strong meet, a few individuals stood out and placed in the top 10 amongst the other teams.

The team’s hard work became evident throughout the weekend through individual improvement.

Tixier overcame tough competition and had an excellent second place finish in the 100-yard freestyle at Monday finals. In addition, she shaved .42 seconds off her prelims time. Ali’s hard work also paid off when she finished sixth out of 22 swimmers in the 200-yard backstroke and set a new school record as the first woman to post a time under 2:20:00 in this event.

The women also excelled in the relay events and placed solidly in the middle during the 400-yard freestyle relay, coming in fifth place. The women placed ninth overall and the men took fifth place after the conclusion of Monday finals. Freshman Noah Reed from the men’s team swam the 1,650-yard freestyle at this meet and placed eighth, earning a national qualifying time.

Many swimmers earned national cuts during this meet, including freshman Lily Barrett, sophomore Sammy Dammann and Kirschner from the women’s team and Reed and senior Darrin Smith from the men’s team.

Biola works hard to continue this tremendous success at the NAIA National Championships starting on March 3. The team has started tapering at practices, swimming less yards in order to preserve their energy, allowing their bodies to recover and swim their best at nationals.

Move to a New Environment

The NAIA Championships took place in Oklahoma the past three years but moved to Columbus, Ga. this year. None of the swimmers have traveled to Georgia, so the team must adjust for the different environment and facility.

“As a freshman, I’ve never really experienced anything like that [nationals] before, so I’m just super stoked to experience it all and take it all in — being able to represent Biola not just locally but on a grander scale,” Barrett said.