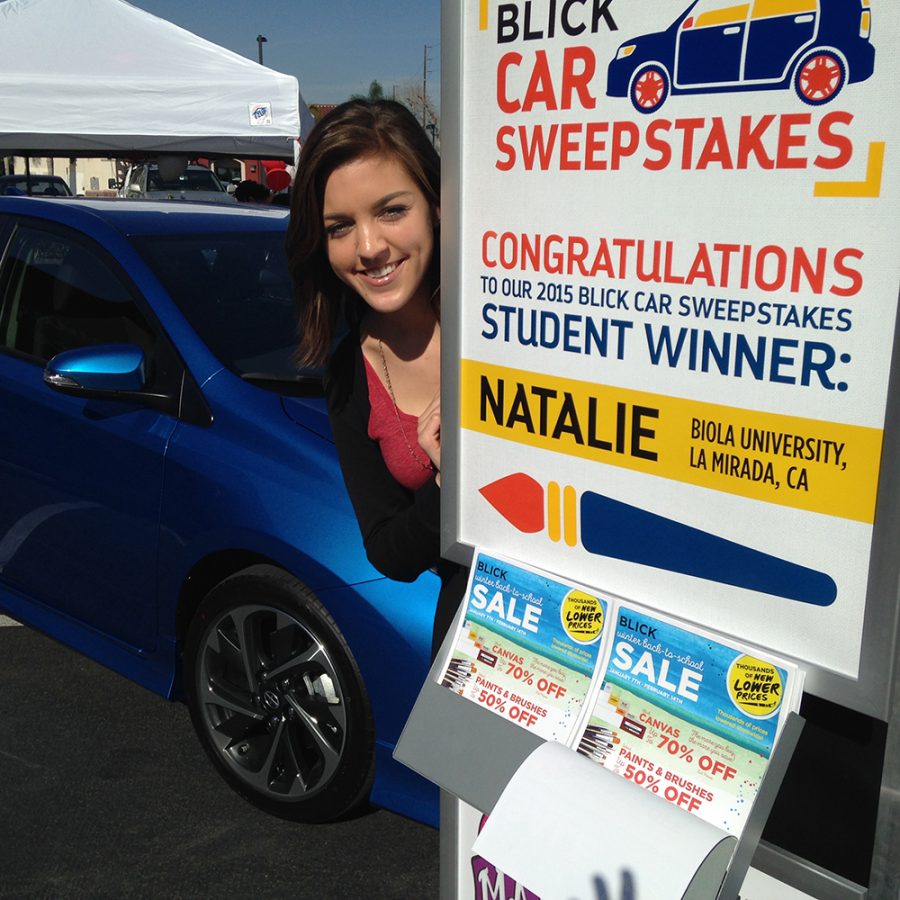 A few weeks after the fall 2015 semester began, senior art major Natalie Toyer went into Dick Blick Art Materials for paint thinner for one of her classes. While checking out, she decided to sign up for the store’s Preferred Customer program since she thought it would save her money for future art supply purchases.

“I guess that automatically entered me into the contest and … I was like, ‘Well they have this contest going on but I won’t probably win it but it would be nice to have the preferred card for when I go back later,’” Toyer said.
CELEBRATING HER WIN
The Blick Car Sweepstakes lasted Aug. 13 – Oct. 4 and was held throughout 48 states, barring Hawaii and Alaska. Toyer’s prize consisted of a new 2016 Scion xB worth $19,000 approximate retail value and $5,000 in a Dick Blick’s gift card to Biola’s Art Department. An official ceremony was held at the Dick Blick Art Materials store in Fullerton, Calif. on Feb. 11 to celebrate Toyer’s winning.

When she asked Blick’s representatives if she could have a vehicle other than the Scion xB, they told her she could switch her car as long as she stayed within the ARV. As a result, Toyer chose a 2016 Scion iM.
IN DISBELIEF
Toyer received an email in December 2015 stating she had won a vehicle, but was sceptical at first. Likewise, her parents were also cautious and warned her not to give out her personal information. Toyer investigated the email claims, and when she called and asked employees, they affirmed she had won a vehicle.

From there, Toyer began speaking with a representative to start the process of verifying her identity and receiving a new vehicle. Toyer took a trip to a Scion dealership nearby to see what vehicle she was getting and fell in love with a different vehicle.

“At first I was in disbelief and I told my parents that I got this email that I was probably going to win a car,” Toyer said. “I ended up calling the store and I was like, ‘Hey, I got this email. I don’t know if it’s a scam, if I should be concerned.’ And they said, ‘I think it’s real, I think you probably won a car.’”
UTILIZING THE MONEY
On behalf of the art department, Zehavi Husser, chair of the art department, expressed their happiness for Toyer. Though they have yet to decide what to do with the gift card, Husser assures the money will be utilized well.

“We have yet to decide, but whatever we decide to do, I’m sure it will be put towards the best interest of the department,” Husser said. “We’re thrilled for Natalie that she was able to get the grand prize of the car and we’re excited and thankful to receive the gift card and we know that will be put to great use in the department.”