The notorious San Bernardino has been an unwilling victim to heavy scrutiny in the eyes of the press. However, the Dec. 2 shooting has left the broken city reviving from its ashes. 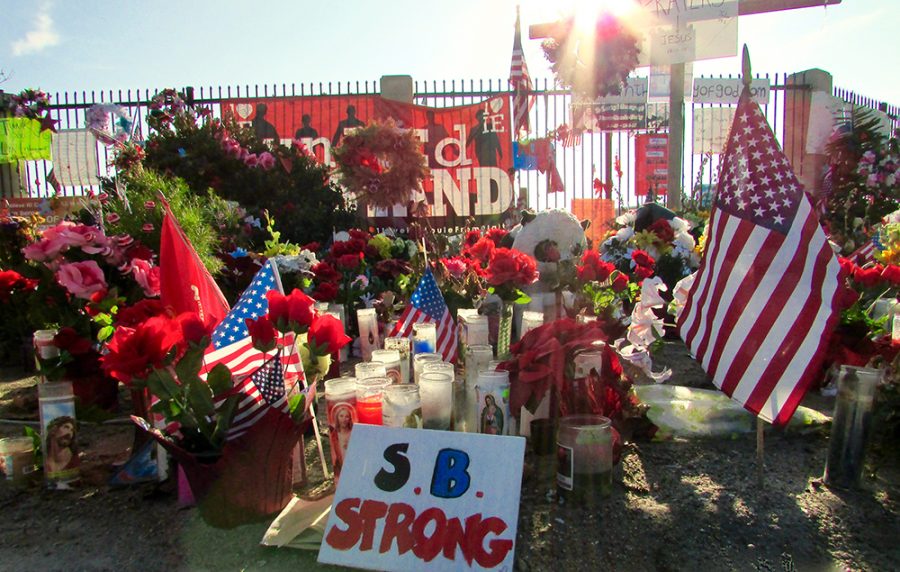 It has been two months since two Islamic extremists stormed through the doors of the Inland Regional Center and opened fire on employees in San Bernardino, killing 14 and injuring many. Since then, the city is in the midst of recuperating from the heartrending events that occurred the morning of Dec. 2.

A negative yet skewed perspective

“Poverty”, “filthy”, “lethargies”,  and “corrupt” are words in the past that have been used to describe the city of San Bernardino, CA. Those same words have been used to describe the infamous cities of Compton and Detroit. Being born and raised in San Bernardino, I admit that occasionally the comparisons do bear truth. To confess, whenever I meet new people and they ask the usual daunting ice-breaker, “where are you from?” I try to avoid the truth and answer with “Southern California.” My cautionary answer is due the commonly negative yet skewed perspective propagated by the media.

“Dirty ‘Dino”, a nickname I have frequently heard from the city’s residents,  has had more than its fair share of social decay, caused by bewildering crime rates and a deplorable economic crisis that has recently engulfed the city into bankruptcy. After crime rates declined from 2009-2012, they skyrocketed 50 percent right after San Bernardino drastically cut its law-enforcement when the city filed for bankruptcy on Jul. 10, 2012. From that point on, the city involved itself in a monotonously abysmal and corrupt cycle of violent crimes and inaction to clean up the illegal activity due to insufficient funding.
Under siege

The recent shortcomings of San Bernardino have caused the city to become almost absent from the press. Unfortunately, when brought up in the news, it was for the wrong reasons. Dec. 2, 2015 proved no different.

It was 10:59 a.m. when San Bernardino County building was under siege. Health department inspector and employee at the Inland Regional Center, Syed Farook, 28 and his wife Tashfeen Malik, 27 opened fire on the conference room that occupied 80 other employees. Moments before the massacre there was a Christmas party and employee award ceremony taking place.

“I entered the main building, it was my building and I encountered a young girl who had been wounded and told me she was okay. Unfortunately, she later died. Entering conference room B, seeing the bodies, the aftermath, the sprinklers going off, the mass amount of blood, the bomb, then trying to provide first aid to individuals as we left the building, I don’t think I really felt anything till probably afterwards,” said C.J. Cook, head of Public Relations and Community outreach.

Cook has served in the military for 20 years and has witnessed similar scenes throughout his service. However, San Bernardino was considered a safe area at the time of the shooting, a realization that left Cook shocked.

“It really hit me about 26-27 hours later. I had to convince myself what I was seeing was real as I worked my way through the building and helping those who were wounded,” Cook said.
Immediately affected

Employees were not the only ones immediately affected. Nearby businesses and schools were greatly shaken.

“We really did not know exactly was happening, but everyone was scared, yet calm,” said Jackson Thomas, an eighth grader at SOAR Charter Academy, located two blocks down the street from the incident. “We were on lockdown for so long that we had to take turns using the trashcan as the restroom.”
The response

In response to the tragedy, the school added emergency restrooms in the case of future prolonged lockdowns.

The victims’ families were devastated. Fellow employees were utterly shocked. For the duration of December, the anticipation of the holidays did not dictate the atmosphere of San Bernardino, but rather grief and heightened fear that filled the minds of many.

Despite the severity of the incident, business had to resume for the non-profit IRC, who employs 670 staff members and serves thousands of patients with physical needs in the San Bernardino and Riverside areas. However, for many employees, going back to work would never be the same.

“There is increased security even though we were not the targets. We use to be an open door facility for so long, people will just drop by,” Cook said.“Those type of things are going to change from now on to where visitors have to be on a list to come inside the facility.”
New changes

Visitors of IRC must be granted access to the parking lot. Security is tight for staff who come to work in the morning. Employees must have a special sticker on their cars. Staff members have been given designated ID cards which grant them access to the only entrance into the building, the front door.

Despite a higher sense of paranoia that hovers over the employees and the city of San Bernardino, there is light to be shed and a silver lining to be found in the midst of the grievance. Citizens have been increasingly exposed to the violence that exists in San Bernardino since 2012. The community has joined together in strength, revealing the inner goodness that exists in the city. This has already been exhibited through the beautiful and poignant memorial commemorating the lives of the victims that were taken at IRC.
The memorial

The one object that really stood out to me at the memorial set up on the corner of Waterman Ave. and Orange Show Rd., was a little bible set up next to a white sign that read in blue and red marker, “SB STRONG”. However, the bible was tattered and torn, it remained standing. It was opened to Isaiah 27:3: “I, the LORD, watch over it; I water it continually. I guard it day and night so that no one may harm it.” Though the passage speaks about Jerusalem, I believe San Bernardino is a parallel to the merit of the verse and to the visual condition of the little bible. This city was damaged, yet it continues to stand unbridled.

For those that consider San Bernardino a real-life dystopian city read about in novels, they are oblivious to the outpour of love and  care displayed through its residents and the memorials set up honoring the victims. The San Bernardino community banning together in itself wipes out the worn stereotypes of a broken city.

“I think politicians inadvertently damaged any good reputation San Bernardino had. Really the city itself is a strong community. It is probably stronger than it was before Dec. 2,” Cook said. “I think the nation and really everyone in the world knows who San Bernardino is now because of the unfortunate incident at Inland Regional Center.”
Back on the map

The nation and the world have put San Bernardino back on the map, initially because of the calamity surrounding Dec. 2. However, San Bernardino is more than the doldrums of high crime rates and a non-existent economy. The city that I have known for 20 years contain people who truly care. It is the place that has humbled me and callused my emotions, but not my heart and I can speak for many residents of San Bernardino.

Let me build a new stereotype for San Bernardino, one that stands behind the notion that nothing in San Bernardino is handed to you; rather it is earned. As a resident, you learn to improvise with an economy that tries to remain standing. You have to fight against the disgrace and negativity that proceeds from the city’s reputation, or you will not succeed. You stay standing when you are pushed down by economic restraints. You must never give in to the perceived stereotype of San Bernardino.

After being home in San Bernardino these past six weeks for the holidays, I have learned to love what the city has become. After being tattered and damaged much like that little bible, is it safe to say that the city is on the upswing.