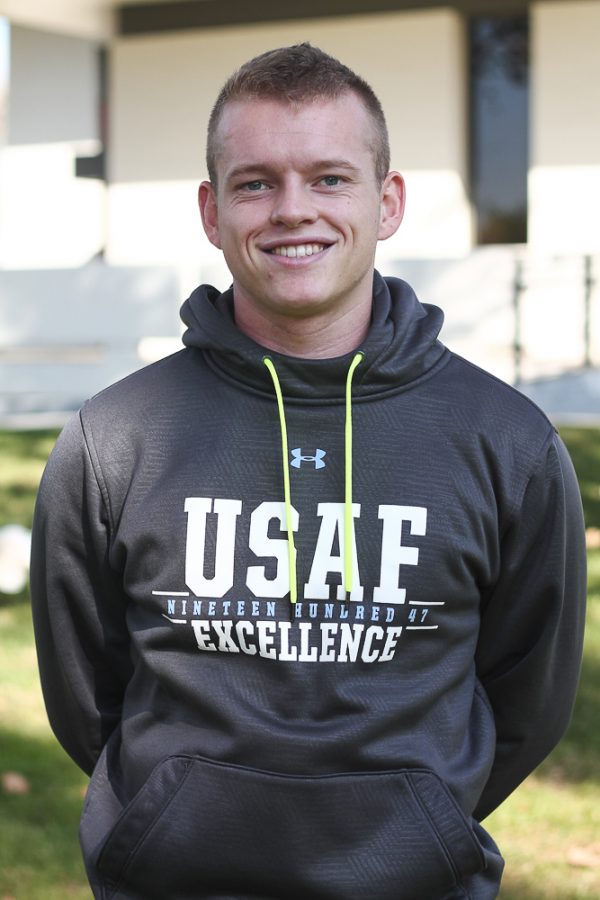 Senior sociology major Mark Stacy and senior physical science major Jason Cottrell glean valuable leadership insight as leaders through ROTC applicable to other spheres of life, and they hope their wisdom impacts the next set of leaders.

Stacy is the cadet wing commander, the senior in charge of all the cadets. Stacey has been involved in ROTC for three years and is part of the University of Southern California program. He provides oversight for the other leaders and acts as a liaison between them and the commander.

“I lead the leaders in a way, so I make sure we’re fulfilling our mission objectives, like our Air Force requirements, and I ensure no things go wrong,” Stacy said. “But more importantly, I’m the voice between the students and the officers above me.”
Cottrell

Cottrell is the S-2 officer, an intelligence and security officer in charge of gathering intelligence needed for a mission. He is also a leader for Ranger Challenge — a group of nine people who compete against other ROTC programs.

Cottrell has participated in ROTC for four years and is a member of CSU Fullerton’s program. Cottrell’s family members inspired him to join ROTC while he was a student at CSU Fullerton before transferring to Biola.
Leadership

Leadership roles are structured into their program, which is essentially led by senior cadets who shoulder high amounts of responsibility.

“We have to plan out our own training and conduct the exercises ourselves,” Stacy said. “When you are a senior, there’s really no one above you to do all that planning for you — you all have to do it yourselves.”
Setting Standards

Stacy and Cottrell strive to set a high standard of excellence for their cadets to follow and they hope to provide a model for others to follow.

“I like to lead by example. If I’m going to ask my people to memorize a bunch of knowledge or pass a fitness test, I’d like to know that myself,” Stacy said.

Cottrell aims to encourage other members and lead alongside them.

“I’d like to say that I’m more of a puller than a pusher, so I’m out ahead of them, bringing them with me rather than behind them, shoving them forward,” Cottrell said.
Valuable Skills

Cottrell and Stacy said taking on leadership roles helped develop valuable skills. Stacy said he gained a higher level of confidence in public speaking because he gave many speeches to cadets.

“Public speaking — I was nervous about my freshman year, but now I’m really comfortable with it,”  Stacy said.

Cottrell said ROTC helped him develop important leadership skills that apply to areas outside the army.

“I see myself coming out a little more developed and more rounded in leadership,” Cottrell said.  “I think the army, the air force, even the military can give you a solid foundation for further work experience when I get out of the army, or even right now.”
Positive Changes

He also said he has seen a change in his confidence and developed self-discipline.

“I’ve grown in confidence since freshman year a lot, discipline and I know what hard work is,” Cottrell said.

“We evaluate all of it, even from marching all the way down to critical thinking scenarios,” Stacy said.
Development

“We’re teaching everyone the basics of being a soldier,” Cottrell said. “So while we teach it, we try to instill the discipline so they not only learn, but it also develops their leadership as well.”

Although they successfully lead other cadets, the men encounter leadership challenges. Stacy said it can be difficult to focus on the younger members when he is concerned with other problems.

“It’s kind of hard to make sure everybody makes it through the program because I’m focused on big picture things,” Stacy said.
Finding a Balance

Cottrell said finding a balance between pushing members too hard or not hard enough can prove difficult.

“When you don’t push hard enough, people slack and they get in this complacency mentality, but if you push too hard, it doesn’t benefit anyone,” Cottrell said.

Stacy wants to serve the United States through the air force as a security forces officer — protecting men and women at home and overseas. In graduating this semester, he hopes to transfer what he has learned to the next group of leaders.

“My goal is to pass on my knowledge, try to make leaders before me before I graduate,” Stacy said.
Stepping Up

Cottrell hopes to step into a higher leadership role next semester as a battalion commander. He said this role requires a large amount of effort because he advises the group and his actions affect the rest of the members.

“You really mold that group and make it what you want it to be, which reflects on all of them,” Cottrell said.

Cottrell wants to advance in the aviation branch of the army and will go to school this summer to become a helicopter pilot. He also emphasizes the importance of training new groups of leaders to take on the roles of senior members.

“You’re supposed to be there for everyone else and to train them,” Cottrell said. “I just want to see this as a vital time to teach the young ones.”